Having settled into our Clare College accommodation on Friday evening, Saturday morning was time for the official business of the weekend, the Annual General Meeting which was held in The Latimer Room.

After the formal meeting and a quick break for tea and coffee we were treated to talks by Charlotte Crawley on ‘The Dutch Garden in Norfolk and beyond’ and later by the head gardener of Clare College Steve Elstub on the history and looking after the gardens and ground of a prestigious college like Clare and how they work alongside the rest of the Cambridge colleges.

Then there was a well earned lunch and followed by a guided tour of some of the college gardens.  You can see pictures of these and the other gardens visited over the AGM weekend by looking at Cambridge Garden visits 2014.

Here is a summary of some of the items discussed and agreed at the meeting: 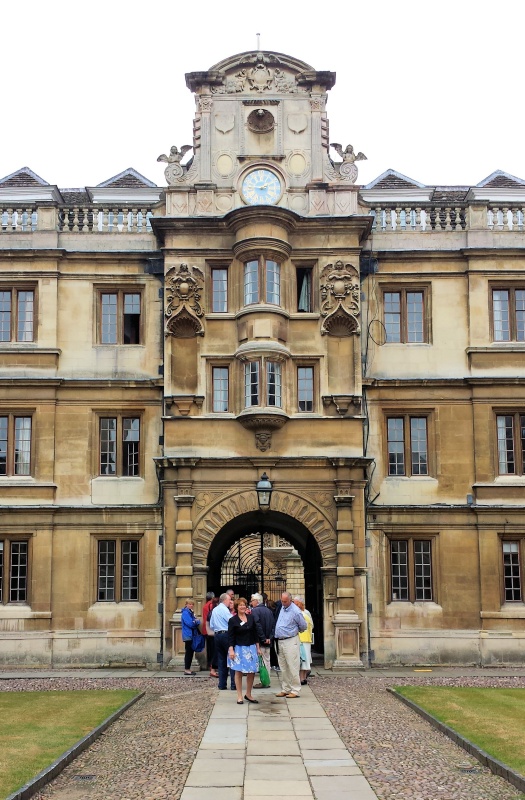 Clare College the base for the 2014 AGM in Cambridge

The Chairman, Mark Hopkins gave an update on the state of EBTS UK and some of the things it and it’s members have achieved over the last year.  He also explained the reasoning behind the new UK constitution which was ratified at the meeting.

Lynda Hinton gave an update on the finances and Stephen Fenny was elected as the new Treasurer taking over from Philip Stockitt who looked after things for a number of years and everyone at the meeting thanked him, in his absence, for the hard work & dedication he has given in the role.  Linda also gave a summary of the membership numbers which showed a slight increase in numbers on the previous year.  She also explained the idea behind an event that she had organised called “Tea & Topiary” where local members and friends are invited round for tea to get to know each other better and talk topiary.  The idea then is that one of the attendees then agrees to host another event etc so that slowly the location moves around an area and maybe pulls in some new members in the process.

Caroline Foley talked us through the latest edition of Topiarius, the magazine that is sent out to all members of EBTS not just the UK.  As editor she has managed to get an exclusive for the 2014 edition, 2 years before an exhibition at Hampton Court readers are able to see some of the water colour paintings by ‘Capability’ Brown’s assistant, John Spyers while Brown was Hampton Court’s Master Gardener.

Chris Poole gave an update on how the website had been going since it moved to a WordPress based site and explained it was quicker and easier to update stories and events using the new web based access.  He also said he was working closely with Caroline to get more of the academic items from Topiarius onto the web so that they were more accessible to people researching the history and science of boxwood & topiary.  Chris also encouraged members to send him links to topiary stories in the press or events that would be of interest to other members.

Bruce Ginsberg talked through the Education Module – Contemporary Topiary which a group of the EBTS Council have been working on along with Jane Crebbin-Bailey who has been using her knowledge of the academic world to pull the ideas and suggestions into shape.  The next step having got the structure right is to flesh out the content and Bruce explained that to do this it needs to be funded which are being actively looked into before trailing the course with some selected students and colleges.  Sarah Aaronson OBE, a concert  soloist and EBTS UK member has worked with Bruce to arrange a concert for us at the splendid Southside House.  This will hopefully take place on the 16th October so keep the evening free in your diaries.  The intention is to charge £70 per head with a pre-concert drink, and dinner afterwards.

Towards the end of the meeting there were discussions and suggestions for possible events and garden visits for 2015.