Buxus is prone to a certain number of diseases and pests. These diseases can be virulent and every effort should be made to use disease free box in the creation of new gardens and topiary. 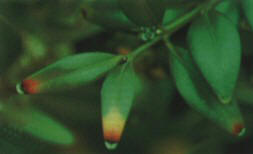 The three most common fungi to affect boxwood are Cylindrocladium, Volutella and Phytophthora. Accurate diagnosis is made by sending a sample to a pathology laboratory (the EBTS is affiliated to the RHS).

Fungi flourish in warm, damp conditions, particularly in old dwarf box hedging, where close clipping over the years has allowed the growth to be confined to the outer 2 inches (5 cms) with fallen leaves making a damp culture medium at the base.

The best treatment is prevention, by buying plants from a disease-free, reputable nursery, by establishing good drainage, by maintaining an open growth habit, breaking off tight surface growth to allow air to circulate, and by improving nutrition, because spraying is often unsuccessful.

Cylindrocladium was first recognised to be a major problem in the UK and now affects Europe, America and New Zealand. It causes brown spots on the leaves, followed by rapid defoliation and black streaks on the twigs, affecting part or the whole of a plant or hedge. Treatment is probably best left to a professional nurseryman as most of the effective fungicides are unavailable to amateur gardeners. Even the professional fungicides are frequently ineffectual but there are reports of spontaneous recovery in the long term. 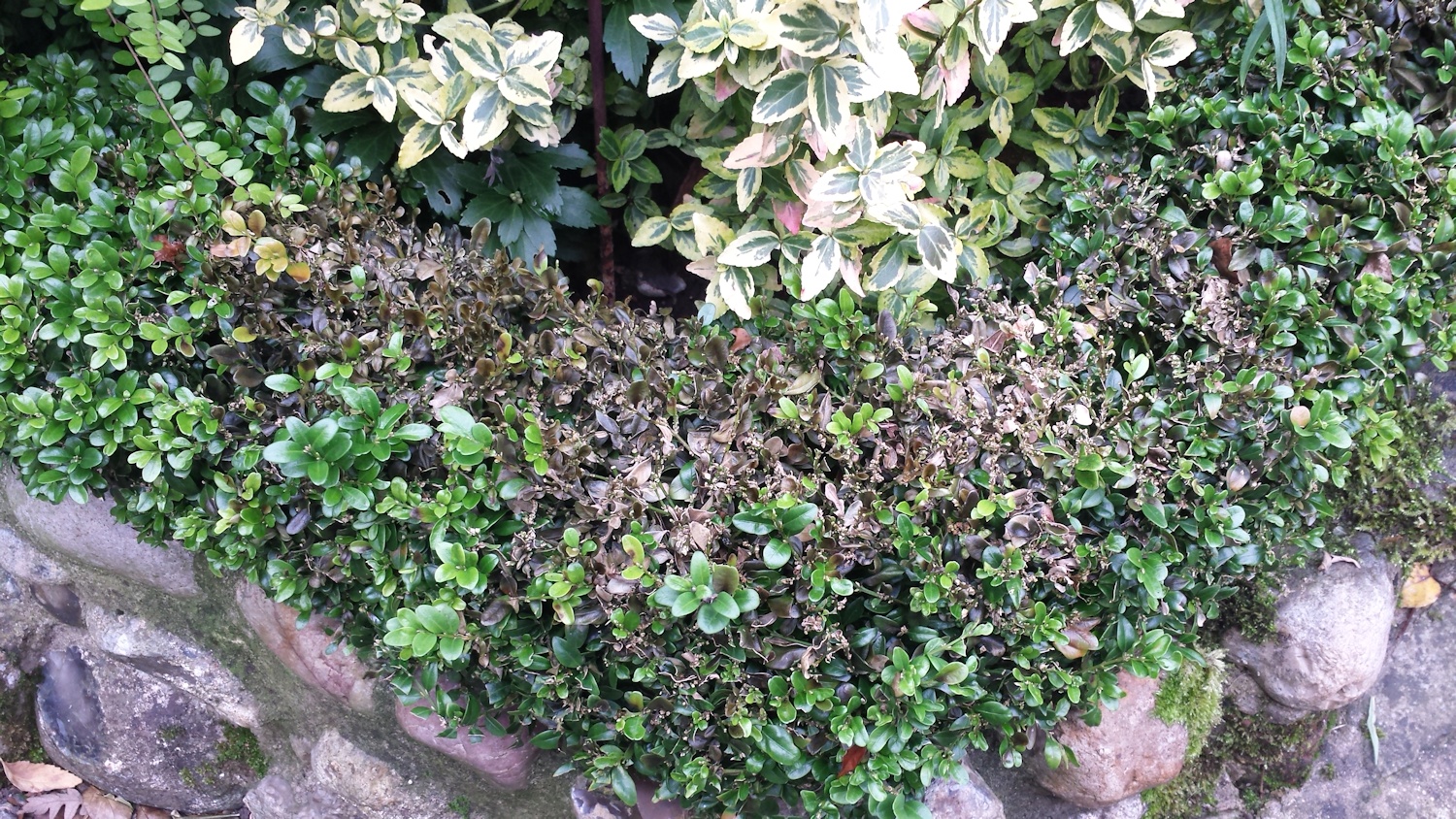 Specifically for Cylindrocladium box blight, in the UK, the Royal Horticultural Society ( RHS) has been undertaking research work for a number of years.

The number of cases of Cylindrocladium blight on Buxus has increased steadily in the last few years and is now the highest the RHS advisory service has observed since 1998. Fairly warm and wet weather is conducive to this disease. As nurseries are becoming more aware of this problem Buxus plants are subject to regular fungicidal spraying and symptoms are suppressed. However, with suppression of symptoms, there is a higher risk of unknowingly introducing the disease to our gardens.

In 1996, the RHS started a three year field trial evaluating fungicides for the control of Cylindrocladium blight at the ADAS Arthur Rickwood site (Cambridge) which was partially funded by English Heritage. The work being carried out assessed the protective and eradicative action of several fungicides available to both amateur and professional gardeners on Buxus sempervirens ‘Suffruticosa’. In the first year, several products were identified as working better after either a preventative or curative application. Complete control was however not fully achieved.

In the second and third year, preventative and curative treatments were combined to test if complete control of the disease could be achieved. The fungistatic action (ability to inhibit growth and reproduction without killing the fungus) of the fungicides was also assessed by checking the plants for signs of the disease after the end of the treatments. This way it was hoped that more informed advice about fungicide application could be given in the future.

The work on the identification of the fungus and the phylogenetic analysis was published in 2002. After that in vitro fungicide tests and host susceptibility work were carried out. This was presented to EBTS by one of the RHS’s Principal Plant Pathologists, Dr Beatrice Henricot, and a resume of the work was published in our magazine Topiarius Volume 6 Summer 2003. We are indebted to her and to the RHS for their continuing work in trying to resolve this problem.

In the RHS magazine ‘The Plantsman’, published in September 2006, a very informative article was issued entitled ‘Box blight rampages onwards’ where Dr Henricot reviewed the situation and outlined future research being undertaken to try and mitigate the effects of this disease whilst also trying to find a permanent cure.

In certain plants or their branches new growth starts late and is less vigorous than in healthy plants. Leaves turn brown and turn upwards close to the stem, with small, pink fungus fruiting bodies on them. The bark of the stem is loose, revealing grey discoloured wood. Treatment is to remove all infected branches in the spring and spray with a copper fungicide.

Phytophthora is a soil-borne fungus, growing in poorly drained, over-watered soil. Leaves turn straw-coloured but remain attached to the stem, which is brownish black and the roots are dark brown with peeling bark. It is a highly lethal disease and is best removed, not replanting boxwood in the same bed.

The nymphs of Boxwood psyllid (Psylla buxi) suck on the sap from the base of new leaves in spring, causing cupping of the leaves making them look like small ‘brussels sprouts’.  They leave white flecks or a profuse white powder which can be seen in the leaf tips and when the bush is agitated.

Psyllid damage is mainly aesthetic so light infestations will produce only scattered leaf cupping, but this can build up over time.

Treat by spraying with insecticidal soap or summer horticultural oil in spring or carefully with a chemical insecticide.

The major natural insect predators in order of importance based on their abundance are anthocorid hugs (Anthocoris nemorum), ladybird beetles (Propylea 14-punctata, and Adalia bipunctata), the European earwig (Forficula auricularia) and the green lacewing (Chrysoperla carnea). 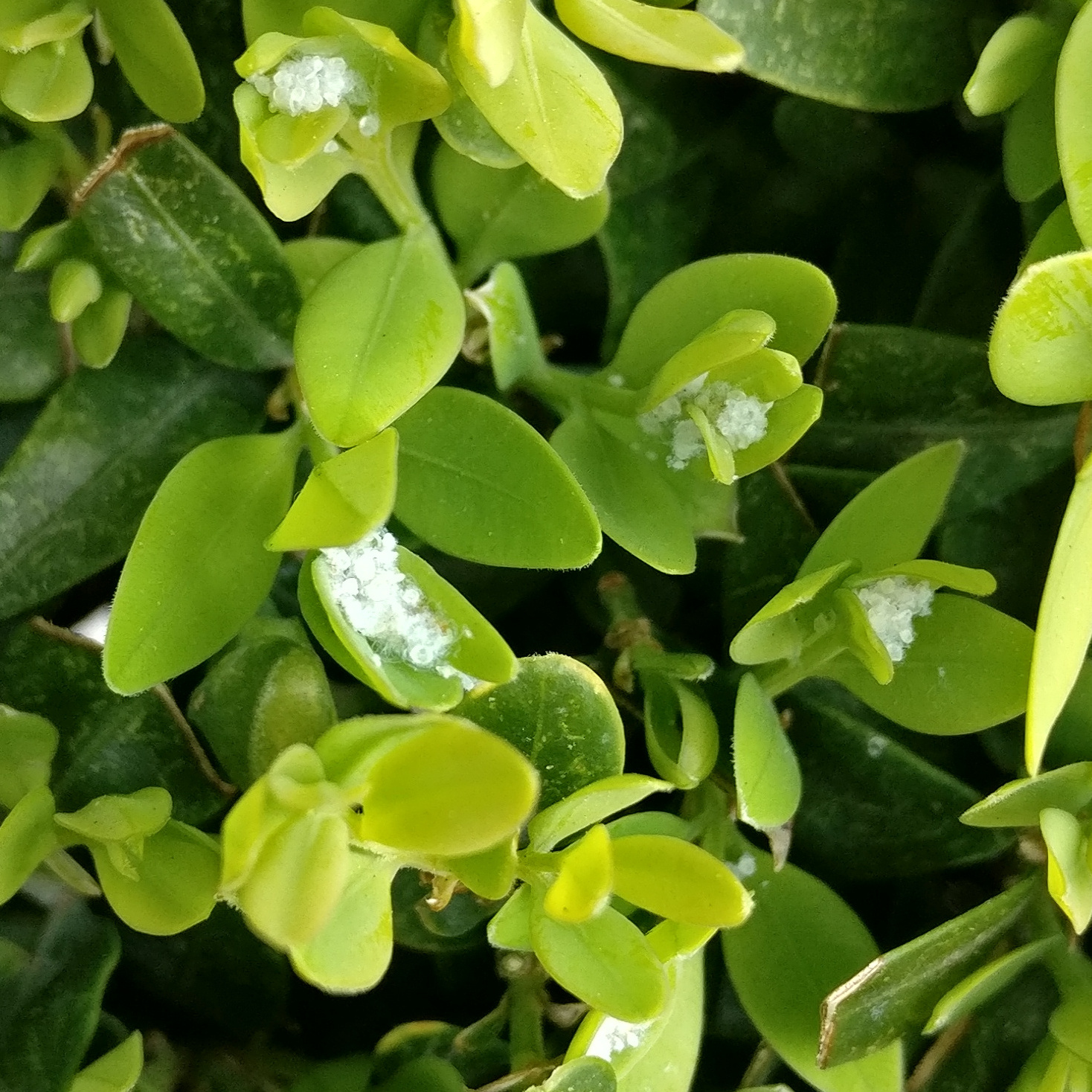 These tiny spider-like mites attack leaf surfaces, resulting in yellow scratch-like spots on the upper surface of leaves, giving them a silvery appearance from a distance.

Most active in early summer when temperatures are at 21c when the life cycle can be as short as 10 days.

Treat by repeated strong sprays of water to wash off the leaves or a solution of horticultural soap (this suffocates them).

Less common boxwood pests are nematodes, boxwood leafminer and other fungi, such as Fusarium and Macrophoma.

This is a very complex subject and in view of its significance in the gardening world various trials and other research are being undertaken by a number of recognised horticultural societies throughout the world.