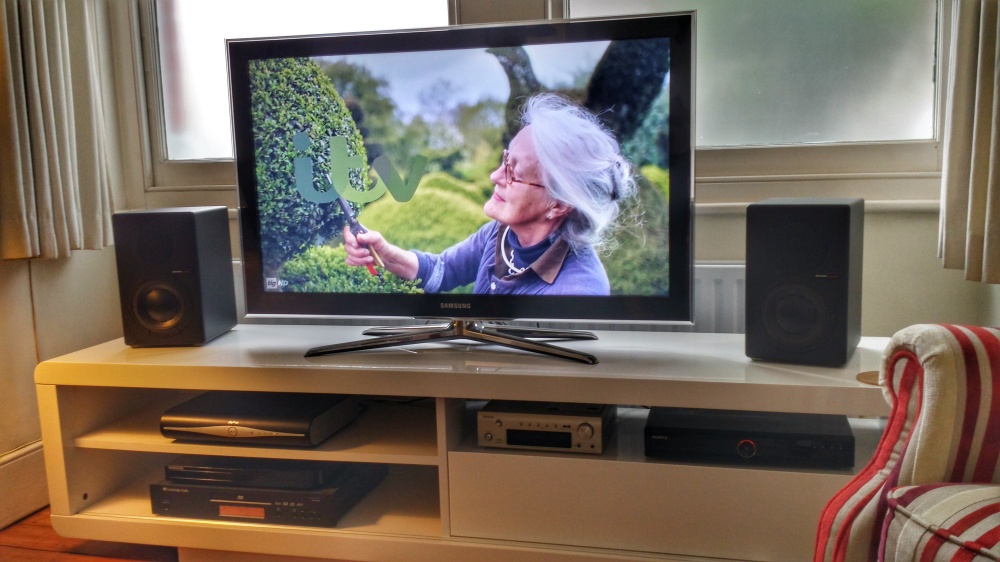 You may have noticed that between the programmes on ITV they have a new ident featuring EBTS UK’s very own Charlotte Molesworth.  This is how she described the day the ident was recorded.

When ITV were filming, they came with a big crew including a few rather thumb twiddling ones! They did many shots, some up the ladders, some on the ground and at one point one of the delightful and very young assistants dropped yew cuttings above my head whilst I was cutting box!!  I put him right and he found box clippings, also they arrived + big box in pots which I asked them not to bring into the garden as nervous of outsiders.  They had shiny, reflective ‘umbrella` things and huge fluffy sound-mikes, a real palaver but, unlike the BBC I got payed and a free lunch at the Bull pub.  I have not seen this flash appearance as I hardly ever watch TV but get frequent reports!

If you want to see the ident click on the button and you can see it on a site called “The Ident Gallery” which has a huge selection of TV Idents.
View the ITV Topiary ident
The image on the TV is from the TIG website and material is copyright ITV.
ITV website
2nd Fund Raising Concert at Southside House 2015 AGM Weekend in Yorkshire – 3rd UPDATE