My first hand experience of the BOX MOTH

One of the box plants which suffered a box moth infestation in a London garden. As you can see it’s awaiting its annual clip which will take place early next year when the young growth has hardened up, but not during frost conditions; clipping when the growth is fresh and young makes the plant more vulnerable to burnt edges and box blight 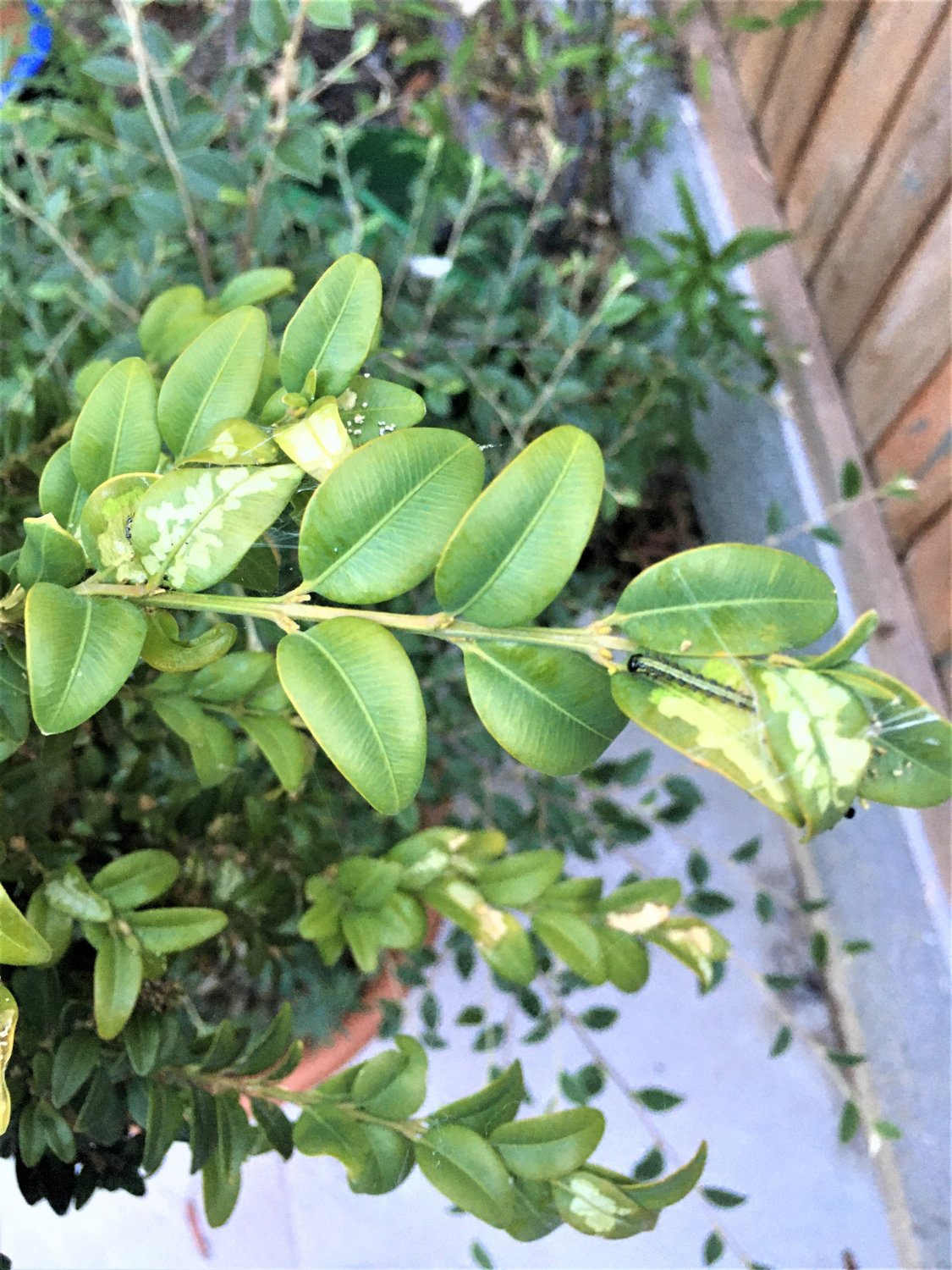 Here you can see the effect that the chomping of the box moth caterpillar has on leaves (the yellow patches) along with a large caterpillar on the right-hand leaf, and nearby the white sticky threads it manufactures to bind together leaves making a shelter where it can cocoon, to emerge later as the box moth (if not dealt with at this stage, as here…)

and what I did about it!

In my small London garden I have two lollipop-shaped topiarised box plants in pots—each pot standing about 40cm tall and the plant another 60cm or so.

I observed an infestation of caterpillars, identified them as the caterpillars of the box tree moth, then researched on the EBTS website and elsewhere the prognosis and the best way to treat them.

Spent an interesting few days removing them by hand. Probably removed the best part of a hundred caterpillars over the course of a few days. Drowned them and left them out in the garden in the hope that another animal might develop a taste for them. The only animals that were interested were wasps and they were impressive. They turned up pretty much straight away and could eat a big caterpillar in a couple of goes.

Came to the conclusion that I was only able to spot and remove them when they were over a certain size and by then they’d done most of their damage, so my efforts were pretty ineffective, and given the number of caterpillars the plants were likely to be defoliated.

Read about biological control methods – only one was said to be effective, a strain of bacteria called Bacillus thuringiensis. The bacteria are sprayed onto the plant and sit on the leaves for a few days before dying due to UV exposure. If in that period the caterpillar eats the leaves the bacteria multiply in their stomachs and then act as a colony to infect other caterpillars. This continues until all caterpillars are dead, after which the bacteria die. The caterpillars are meant to stop eating within a few hours of ingesting it and die within a few days. I read online that it is certified organic and is popular with organic brassica farmers because it is also effective on other caterpillars. It is not effective on any other animals because the stomach acids of other creatures (including wasps, bees etc) kills the bacteria immediately. There appears only to be one brand; it’s called XenTari and is sold by a company called Topbuxus.

I bought it from Amazon – £14 for enough to do 150 sqm. It comes in a box of 15 little one-gram sachets which you mix with water before spraying onto the plant. My initial dose used just half of one of the sachets. The caterpillars did seem to lose their appetite very quickly before dying and becoming black and crusty. After a few days they had all gone. The tree took a few months to recover but no ill effects were seen from the treatment – other animals continued to exist in the garden as before. Three months later, in the autumn, there was another infestation which I treated in the same way, although since they only feed in temperatures above 15 degrees the results were slightly different – the caterpillars weren’t feeding very much and so a) weren’t causing as much damage and b) weren’t universally affected by the treatment.

Currently Bt based products (like XenTari) are not registered for domestic use in the UK, however, they are available for use by professionals.

All Topbuxus products are available via the link below which helps support EBTS UK as Topbuxus, an EBTS UK member, donates 15% of your order value to the society.

Archive boxes in use at RHS Herbarium