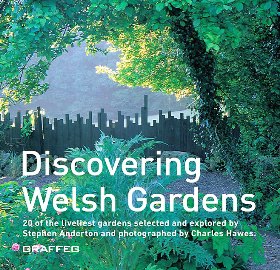 20 of the liveliest gardens selected and explored by Stephen Anderton and photographed by Charles Hawes.

It was when the Stephen Anderton, gardening correspondent to The Times newspaper, saw the Veddw and met the owner Charles Hawes (the award winning photographer much featured in this issue*) that the idea of discovering Welsh gardens together for a book was born.

As two Englishmen who had settled in Wales ‘to make gardens’, the plan was not to create a gazetteer or a history, of which there are plenty, but to pick out some twenty gardens that show how Welsh gardens ‘tick, now’.

‘What sets apart a good garden,’ writes Stephen Anderton, ‘is being alive, having some ambition and polish and is working hard at what it does best.’ No garden may rest on its laurels by reason of being of ancient and illustrious pedigree alone ‘like an old whore whose grandfather was an archbishop.’

Nonetheless some aristocratic gardens are included in the book, Bodnant and Powis Castle, amongst them. C18th Erddig in North Wales, which has been discreetly restored by the National Trust to refreshing simplicity, gets a place, as does Aberglasney in the Tiwi Valley, which is a restrained classic brought back to life by a private trust ‘like an old Quaker dress salvaged from a trunk.’

Distinctly less discreet is Bodrhyddan in Denbighshire, where the grand swirling parterres designed by William Andrews Nesfield (who had a major hand in designing Kew Gardens and Green Park) are now filled with ‘day glow slabs of begonias in no-nonsense red pink and white.’ Sunglasses are recommended for the faint hearted.

More modestly is the plants man’s garden Cae Hir, Ceredigion, settled upon for a nursery by a Dutch couple who went house hunting with a spade. At Diffryn Fernant, the valley floor is a water meadow and a carpet of wild flowers – a bog to meadow arrangement making a sensitive ‘response to the valley’. Tony Ridler’s garden, near Swansea, is a minimal secluded world described as picturesque ‘in the way it follows the philosophy of painters like Ben Nicholson and Mark Rothko’.

The joker in the pack is Dewstow. The artificial caverns, tunnels and rockworks developed by an Edwardian bachelor, make it into a ‘a fat lady in a booth type of place.’ The faux Italian village of Plas Brondanw is an ‘architectural capriccio’ with its ‘brightly coloured stucco, trompe l’oeil painting and scraps of architectural salvage’ and where everything is delineated by dark yew hedges and topiary. On the other hand the National Botanic Garden of Wales with its £9 million greenhouse designed by Norman Foster is ‘part hill, part spaceship’.

The Veddw, in Monmouthshire – the beautiful, original and uncompromising garden that inspired the book – is also included, of course. ‘Its intellectual ambitions’, writes Anderton, ‘so closely tied to its location make it one of the most interesting gardens in Britain and a first for Wales.’

Like the gardens in Discovering Welsh Gardens the writing is lively and there is a sense of real enjoyment. Stephen Anderton is a wit but not a dry one and he knows his subject inside out. Charles Hawes’ pictures are gorgeous and each garden is given plenty of room – ten pages or more so that you can get a really good look at them. I see the book as a warm-hearted, high-spirited celebration of the best and most interesting gardens in Wales today.

Having read it, I long to see them.

The Art of Creative Pruning reviewed by Bruce Ginsberg