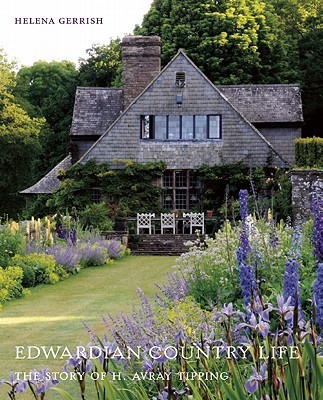 The Story of H Avray Tipping by Helena Gerrish

Henry Avray Tipping was at the forefront of the vanguard elite of country life at its most beguiling. He was the unsung hero of the early C2Oth garden and country house movement, eclipsed by his better known contemporaries, Christopher Hussey, Edward Lutyens and Gertrude Jekyll. They all collaborated on gardens and houses, worked and wrote for Country Life and were responsible for it becoming the bible for how to live, furnish and garden.

As a staff architectural writer, Tipping and Edward Hudson the publisher from Country Life, used to run around the countryside in a chauffeur-driven Rolls Royce, driving the house owners mad with their pursuit of detail and desire for the perfect photograph. Many still exist in the archives of Country Life and some are reproduced in this book evoking an era of a more leisured way of life.

Tipping came from a wealthy Quaker family. His father, William Tipping, bought the entire village of Brasted in Kent, and the locals were put to work restoring the village houses, widening roads and undertaking general improvements which included education, social welfare, religious and patriotic activities. Avray Tipping, a very private man, eventually inherited Brasted on the death of his older brother. Not much is known of his private life. On his death, his gardener, who inherited the main bulk of his estate, destroyed all his private papers. What is known is that he was one of four boys, two of them died, one through a shooting accident, the other through illness, so his family life, though privileged, was marked by tragedy.

He was a true renaissance man, being able to turn his hand to anything. At Cambridge he excelled in acting skills that would have guaranteed a successful career in the theatre, and he was also an excellent cook. But after taking a First in Modern History in 1878 he did not enter politics as was expected, but worked for Leslie Stephen on the Dictionary of National Biography. His love of gardening was always paramount. He once remarked “I was given a garden when I was seven. I am now seventy-seven and I stil1 garden. During three score and ten years, I have made and maintained gardens”. His trenching to a depth of three spits, use of good compost doubled the growth of his shrubs and he combined old-fashioned fringed pinks and blue lupins to a heavenly effect.

This quiet man had other passions in life, he was true to his Quaker origins, always interested in social housing and when Rhiwbina Fields, the Cardiff Worker’s Co-operative Garden Village Society was slow to attract investment, he purchased land, built eighteen houses, curved the road to take advantage of a natural stream with a wooden bridge, to give each house a unique view. When the time came for him to be repaid, he waived the monies aside so the village could benefit from a cricket pitch and recreation hal1. This estate still exists today.

He was influential in the Arts and Crafts movement, and the houses he built reflected the way the existing land lay. Whilst he was not above tweaking a stream into a cana1, he did not move mountains. Rather he created the garden to fit the land.

He died it 1933 aged 75, but his work has endured, notably at Chequers which was given to this country for the use of the prime ministers by its benevolent American owners the Whitehouse’s. He advised on Dartington Ha1l and his work can still be seen there. One of his houses in Wales has been in the same ownership and his garden exists, though the trees have grown to obscure the view of the Bristol Channel. He was also instrumental in the early da1.s of the National Garden Scheme, encouraging house owners to open their gardens to the public.

Helen Garrish, whose research led to this remarkable biography of this understated genius has painstakingly restored the garden at High Glanau Manor, Tippings last country house and garden, where he lived from 1923 until his death in 1933. Not only does her garden faithfully recreate his ideas and as near as possible his planting, her book is packed with fascinating plans, paintings and photos taking the reader into a bygone world.