It is not clear, for instance, why this often quoted chapter and verse is reputed to mention boxwood.   Isaiah received his call to the prophetic position in the Temple in Jerusalem in 742 BCE. His Chapter 30 was a warning to fractious Judah, which was rebelling under the leadership of Hezekiah against the Assyrian king, Sennacherib. The Assyrian empire had become overstretched and was fading at this time after attempting to conquer Egypt – Sennacherib was defeated there because a plague of mice ate all his archers’ bowstrings!

“Now go, write it before them in a table, and note it in a book, that it may be for the time to come for ever and ever: that this is a rebellious people, lying children, children that will not hear the word of the Lord.”

Biblical prophets did not pull any punches!  Isaiah was writing one year before the siege of Jerusalem by Sennacherib and he was advising the inhabitants to sit tight:

“Their strength is to sit still.”

and they would be delivered by the Lord.  At the siege a plague killed 185,000 Assyrians and Sennacherib withdrew after he was paid a ransom, to be murdered later by two of his sons. The reason that Isaiah wanted this prophecy recorded was so that people should in future know, when the events of the prophecy came true, that they should have trusted in God to deliver them.

It is difficult to understand what the King James’ scholars in 1605 onwards meant by ‘in a table’ but Webster’s Bible of 1833 retained it.  The American Standard Version of 1901sensibly altered it to ‘on a tablet’ but kept the rest of the wording.  The Revised Standard Version of 1952 differed somewhat:

“…That it may be for the time to come as a witness for ever.”

The New King James Version (American) of 1982 retained the alteration and sensibly changed the ‘book’:

“Now go, write it before them on a tablet and note it on a scroll, that it may be for time to come, for ever and ever.”

as ‘scroll’ is more appropriate than ‘book’ for that period. The original Biblical texts were meticulously copied onto parchment, as the Talmud specifically required that the Scriptures be reproduced only on skins of ritually slaughtered animals.  The scribes were called Massoretes and their copies had to have the exact word count of the original or they were burnt.  These were sewn together into 1 to 32metre (3-100ft) lengths (fig 1) and rolled onto one or two sticks.  The ink was soot or lampblack in diluted gum, applied with a reed quill.

Assuming that ‘tablet’ is a proper change from ‘table’ – Habbakuk 2:2 for instance also has, in the King James Version:

“And the Lord answered me and said, Write the vision and make it plain upon tables.”

though it was again changed to ‘tablets’ in most other versions –  but it is still difficult to understand how this tablet could be claimed to have been made of boxwood by Record and Garrett [Record S.J. Garratt G.A. Boxwoods Yale Univ. School of Forestry. 1925: 14; 7] in 1925 on the basis that:

“Boxwood tablets, with their smooth, clean surface, were well adapted for writing purposes, and it was upon such a tablet that the admonitory message of the prophet Isaiah was ordered to be published.”

The Assyrians and Babylonians used clay tablets for their cuneiform writing but wax-coated wooden tablets were used at that time, incised with a stylus and often hinged to protect the scribe’s work.  Although it is likely that these tablets were of boxwood because its close-grained hardness made it the most suitable wood for this purpose, there is no direct evidence that they were.  Record gave no reason for making his statement – ivory and metal were also used at that time. Nevertheless the essence of his reference has been endlessly repeated by later authors [McCarthy C.S. The Story of Boxwood The Dietz Press, Richmond 1950: 8]. 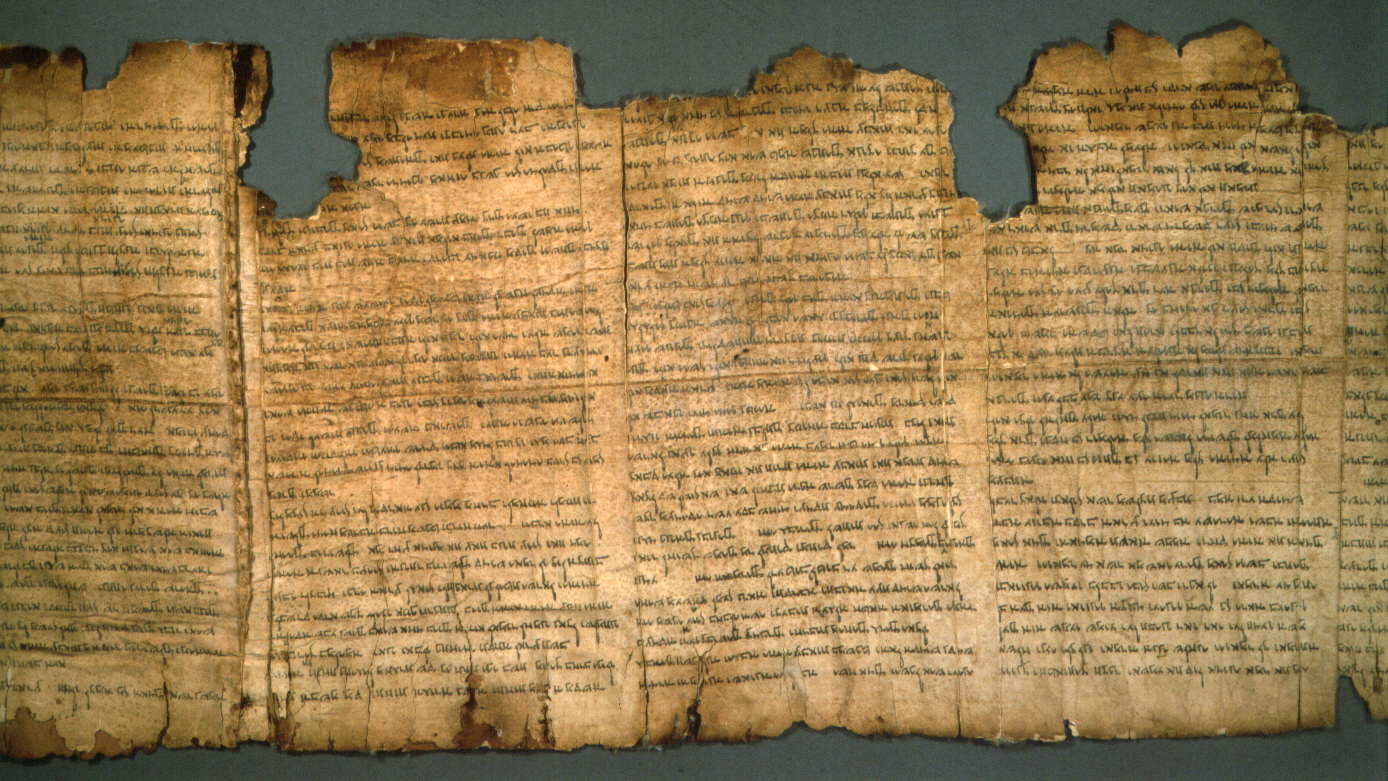 The Bible is no more consistent with Isaiah 41.  In Isaiah 41:18 the Lord is talking to the prophet about the desert but the plants in the desert vary.  In the King James Version, Isaiah reports the Lord as saying:

“I will make the wilderness a pool of water, and the dry land springs of water.  I will plant in the wilderness the cedar, the shittah tree, and the myrtle, and the oil tree: I will set in the desert the fir tree, and the pine and the box tree (fig. 2) together: that they may see, and know, and consider that the hand of the Lord has done this, and the Holy One of Israel hath created it”.

“I will place the juniper in the desert together with the box tree and the cypress.”

but it is the Revised Standard Version of 1952 that makes the radical change:

“I will set in the desert the cypress, the plane and the pine together.” 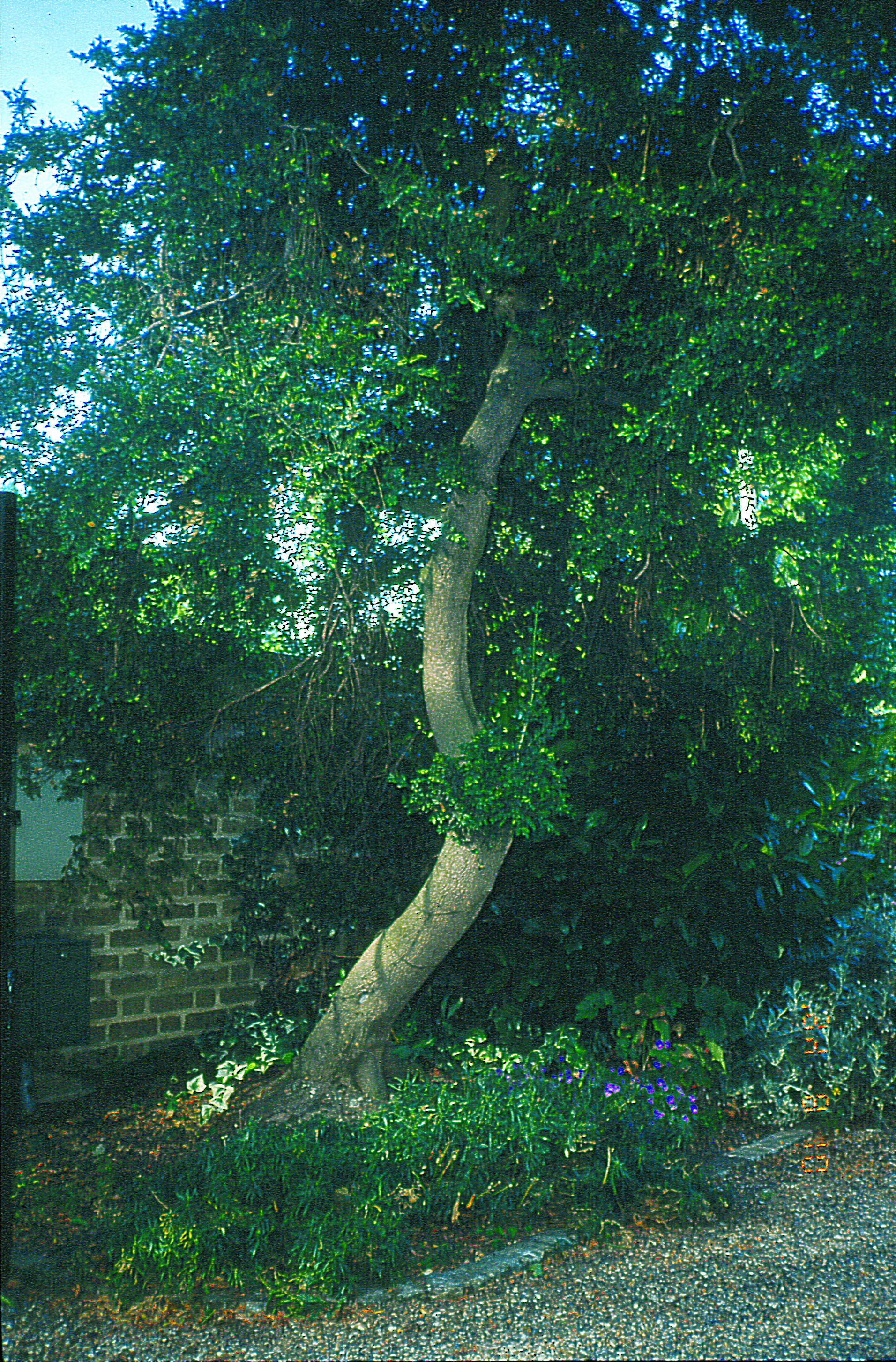 “For the nation and the kingdom that will not serve thee shall perish: yea, [those] nations shall be utterly destroyed. The glory of Lebanon shall come unto thee, the fir tree, the pine tree, and the box together, to beautify the place of my sanctuary.”

“the juniper, the box tree and the cypress together”

but the Revised Standard Version 1952 abolishes the box tree altogether:

“The glory of Lebanon shall come unto you, the cypress, the plane, and the pine, to beautify the place of my sanctuary.”

as does the New Living Translation 1996:

“The glory of Lebanon will be yours – the forests of cypress, fir and pine – to beautify my sanctuary.”

Again, box trees can be dropped from biblical texts without explanation.  At least all versions retain the glory of Lebanon, famous to biblical writers, as to those of today, for its snow-capped mountains, its cedars, its wines and its cool waters.

Ezekiel 27:6 is part of a diatribe (‘lamentation’) against foreign powers that biblical prophets frequently indulged in; in this case it was the Oracles against Tyre in 586 BCE.  Tyre was a famous and rich Phoenician seaport on an island and at the time that Ezekiel was writing, Nebuchadnezzar, King of the Babylonians, was advancing down the coast intent on capturing it and it seemed likely that it would fall.  Ezekiel railed at the conceit of its inhabitants in the King James Version:

“O Tyrus, thou hast said ‘I am of perfect beauty’…….Thy builders have perfected thy beauty. They have made all thy shipboards of fir trees of Senir: they have taken cedars from Lebanon to make masts for thee.  Of the oaks of Bashan have they made thine oars; the company of the Ashurites have made thy benches of ivory brought out of the isles of Chittim.”

Senir was Mount Hermon, 2813m (9230 ft), in Lebanon and is now a ski area.  Chittim or Kittim was Cyprus.  Bashan was an area east of the Jordan, which was one of Solomon’s administrative districts – it was famous for its oaks and fertile soil.  Ashur, as well as being the name of their capital, was the god of war of the Assyrians.  His wife was Ishtar who counteracted his warlike temperament by growing a beard down to her breasts!

Ezekiel goes on to say:

A harsh prophecy, which was not however fulfilled because no land army, Assyrian or Babylonian, could conquer the island fortress.  Nebuchadnezzar spent 13 years trying unsuccessfully to capture it.  It was not until Alexander the Great built a causeway from demolished mainland houses that the city fell.

Cypress now but not boxwood.  The first time boxwood is mentioned in Ezekiel is in the American Standard Version of 1901, where it appears as:

“Of the oaks of Bashan have they made thine oars; they have made thy benches of ivory inlaid in boxwood, from the isles of Kittim.”

and the New American Standard Version of 1971 has:

“Of oaks from Bashan have they made their oars; with ivory they have inlaid your deck of boxwood from the coasts of Cyprus.”

Boxwood can appear as well as disappear from biblical versions!  A possible reason for these discrepancies is that the American Standard Version states that its authors went back to the original Hebrew.  The Hebrew Lexicon [Brown F. Driver S. Briggs C. Gesenius H.W.F. The Old Testament Hebrew Lexicon. Strong Number 839] translates ‘ashur’ as ‘boxwood’.   Where King James’ and English scholars wrote ‘Ashurites’ (Assyrians), the authors of the American Standard Version used ‘boxwood’.  It would be arrogant for humble latter day boxwood enthusiasts to decide on the merits of all these authoritative scholars’ versions, one versus the other.  It’s a ‘Pick Your Own’ situation.

Ashur was once the capital of Assyria.  Its king in 883-859 BCE, Ashurnasirpal ΙΙ, had a palace which contained boxwood:

“I built thereon a palace with halls of cedar, cypress, juniper, boxwood, teak, terebinth and tamarisk.” 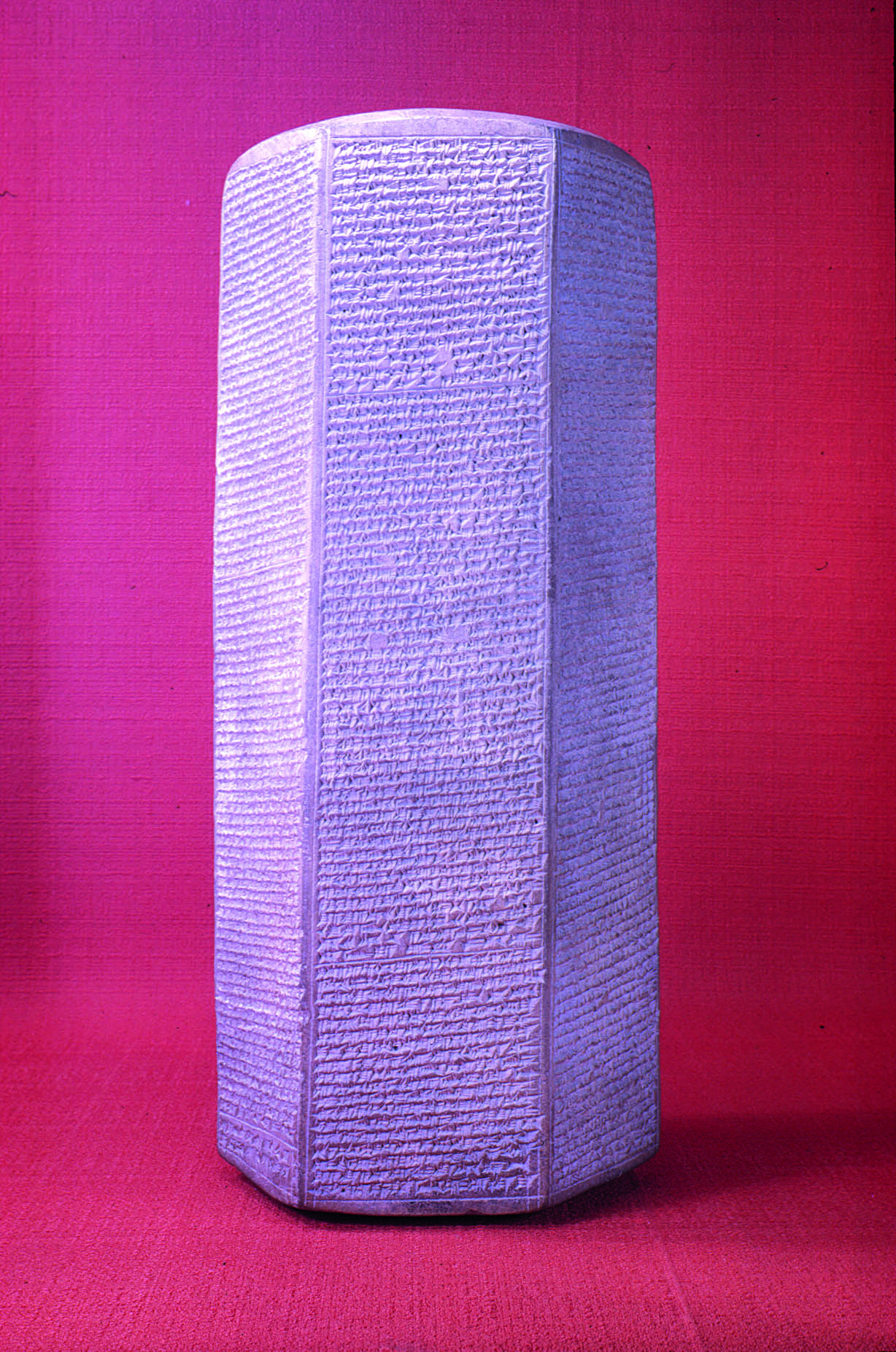 The Sennacherib Hexagonal Prism of baked clay in the Oriental Institute of Chicago Museum is inscribed with 500 lines of cuneiform writing – Sennacherib, like Julius Caesar, wrote his own campaign reports himself [Luckenbill D.D. The Annals of Sennacherib Univ. Chicago Oriental Inst. Publications 1926: col. 2; 37-49] (fig 3).  He was not the most modest of men:

“Sennacherib, the great king, the mighty king, king of the universe, king of Assyria, king of the four quarters of the earth, the wise ruler, favourite of the great gods etc.”

He records on the Prism that he had pressured Hezekiah of Judah, leader of the rebellion, to pay him a ransom to hold off from taking besieged Jerusalem:

“As for Hezekiah, the terrifying splendour of my majesty overcame him and the Arabs and mercenaries he had brought in to strengthen Jerusalem deserted him.  He himself did send to me, together with 30 talents of gold, 800 talents of silver, gems, antimony, large cuts of red stone (sandu), couches inlaid with ivory, elephant hides, ebony, boxwood and all kinds of valuable treasures, as well as his own daughters, his harem, his musicians, he had them bring to Nineveh, my lordly city. To pay tribute and accept servitude.”

Even in 705 BCE boxwood was valuable, to be ranked with gems and even elephant hides!  In fact, his siege of Jerusalem was called off because, reportedly, a plague of mice ate all his archers’ bowstrings!

In conclusion, a case can be made for modifying somewhat the biblical references in the history of boxwood section that begins most books and many articles on the subject, and which tends to be repeated authority to authority.

Firstly, the Isaiah 30:8 reference could justifiably be dropped as it is conjectural that the ‘tablets’ – if they are indeed tablets and not tables – are made of boxwood, though admittedly it is likely that they were.

Secondly, it could be replaced with the references from the biblical period of the two kings of Assyria, Ashurnasirpal ΙΙ and. Sennacherib.

Lastly, it might be advisable, when quoting Isaiah 41:19 or 60:13, to state which version of the Bible is being used, because some versions do not mention boxwood at all.  Readers with their own different versions may otherwise be confused – as was the author!

In any subject it is necessary at times to look carefully at the established certainties that have built up in its literature over the years.  The fact that a respected authority states that something is true does not necessarily make it so.

This article was first published in Topiarus Vol. 10 Summer 2006 pages 7-9