Words and pictures by Gisela Rose-Sell

Following a turbulent history, the medieval moated castle at Schwetzingen was redesigned and extended by three Palatine prince-electors at the beginning of the 18th century.  The most significant influence from 1742 onwards was that of Prince-Elector, Carl Theodor (1724 – 1799), an enlightened thinker and a patron of the arts and sciences.

Unlike in the royal city of Mannheim, funds were not sufficient for a luxurious refurbishment of the castle.  Instead, between 1748 and 1754, two single-storey wings in semi-circular form were built on the side facing the gardens.  These provided the necessary space to use the palace as a summer residence and for holding of court in less formal, but certainly no less glamorous, surroundings.

While in Mannheim there was a lack of space for large gardens, in Schwetzingen the previously relatively small gardens were extended to 72ha by substantial land confiscation between 1748 and 1760. 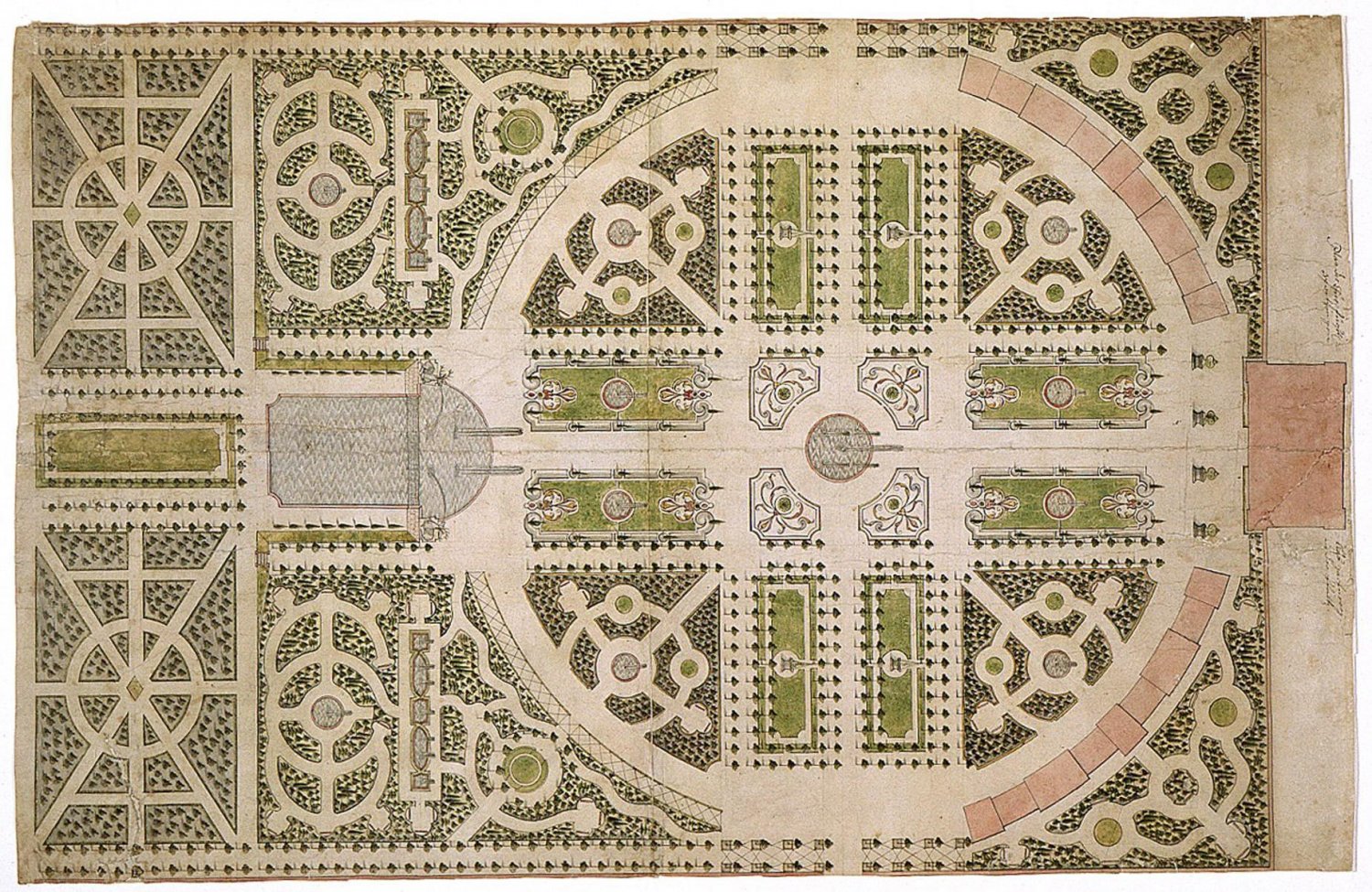 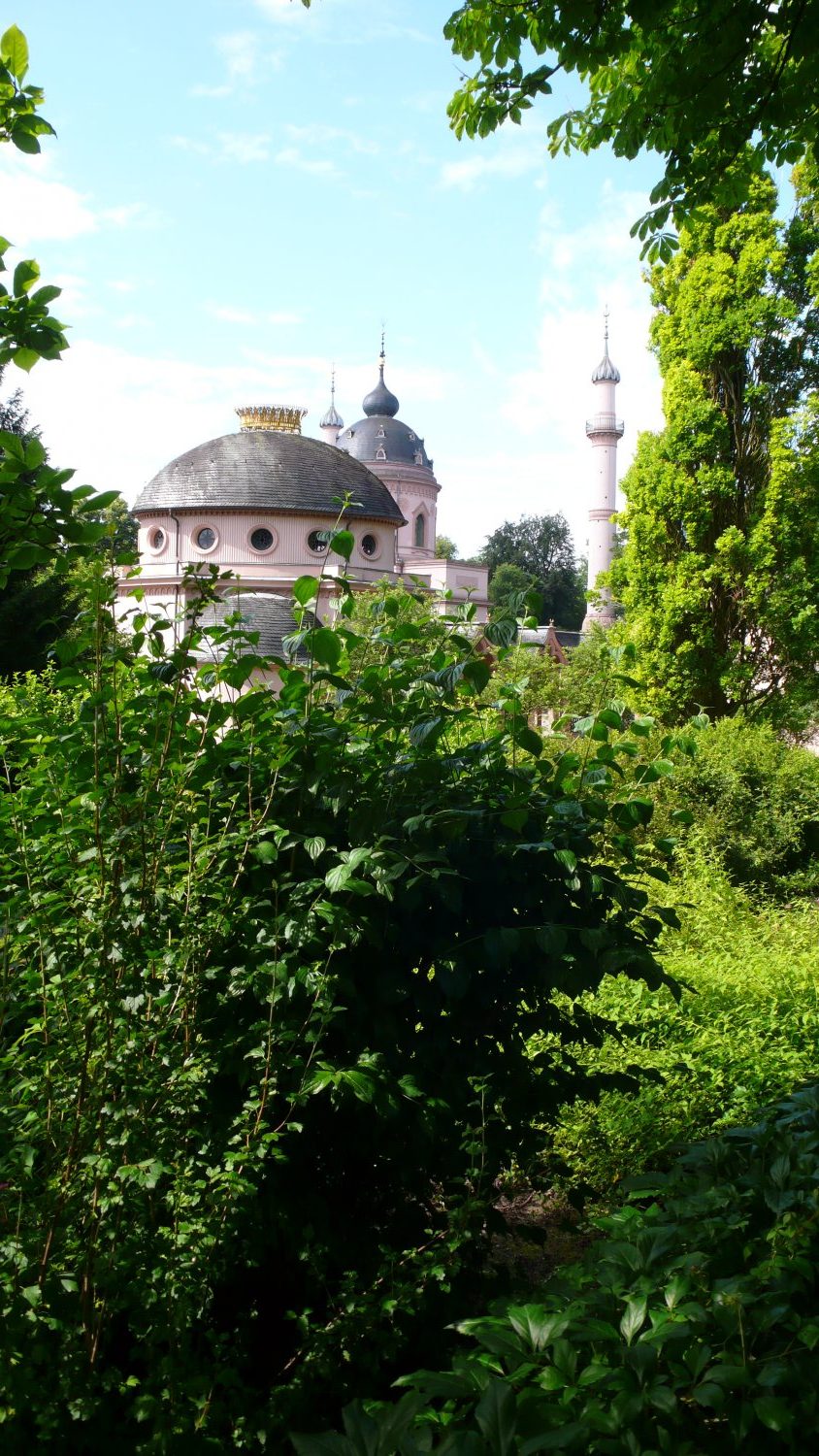 Royal gardener, Johann Ludwig Petri (1714–1794), presented a unique design in the French formal style for the palace gardens, which the Prince-Elector immediately commissioned in 1753.  The design reflected the semi-circular wings with two cradle-shaped pergolas built of espaliers and trellises, to form a circular parterre.  Around these were eight pairs of flowerbeds of four different types – broderies, rectangular lawn beds with borders, small fountains at the diagonal intersections, and bosquets later to be used as bowling greens.  Along the edges of the flowerbeds, allées of Dutch limes lent emphasis to the geometric axes.  The centre of the circle featured the circular basin of the Arion fountain with its bronze statue that shot water up to 15 metres high. 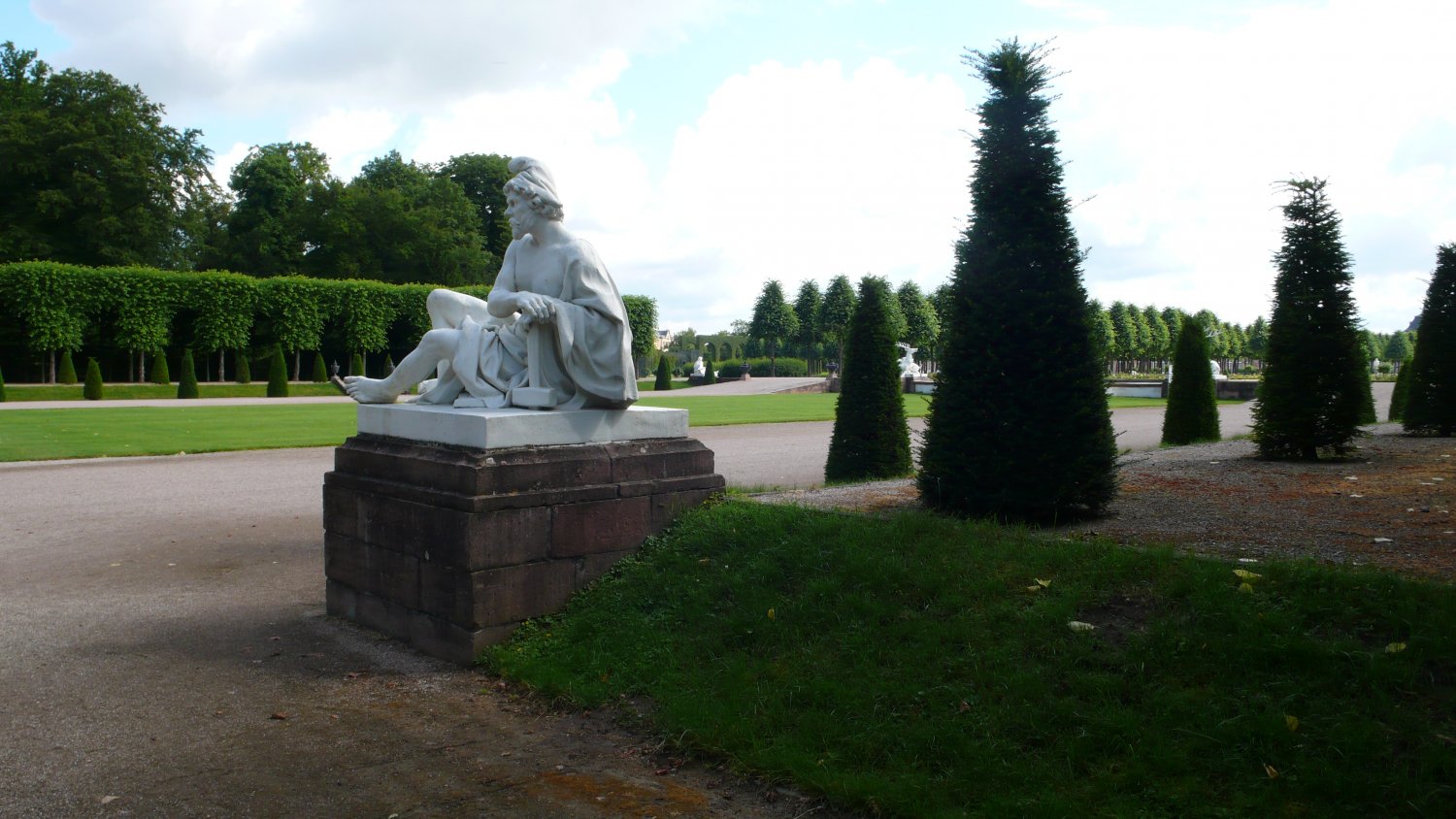 The main axis of the circular parterre continued to the west via a semi-circular basin and a lawn parterre.  The basin is fed by two stags spouting water which flows via a waterfall into an adjacent rectangular pool.  To both sides of the gardens lie further bosquets with ornamental trees and shrubs where shady corners take the visitor by surprise as they follow the  maze-like paths.  Around the edges, high hedges are trimmed in multifarious designs.

Architect Nicolas de Pigage (1723–1796) began his service for the Prince Elector in 1749.  His architectural genius is evident in many constructions here, these include the Rococo theatre, the orangery, the mosque and the bathhouse.  As head gardener, de Pigage  was responsible for the further planning of the park from 1762 onwards.  He extended Petri’s bosquet area to the west, and completed the space with a large basin in a trapeze form.  The boundary of the gardens is hidden by a mound from which the visitor may enjoy a view of the Palatinate Forest. 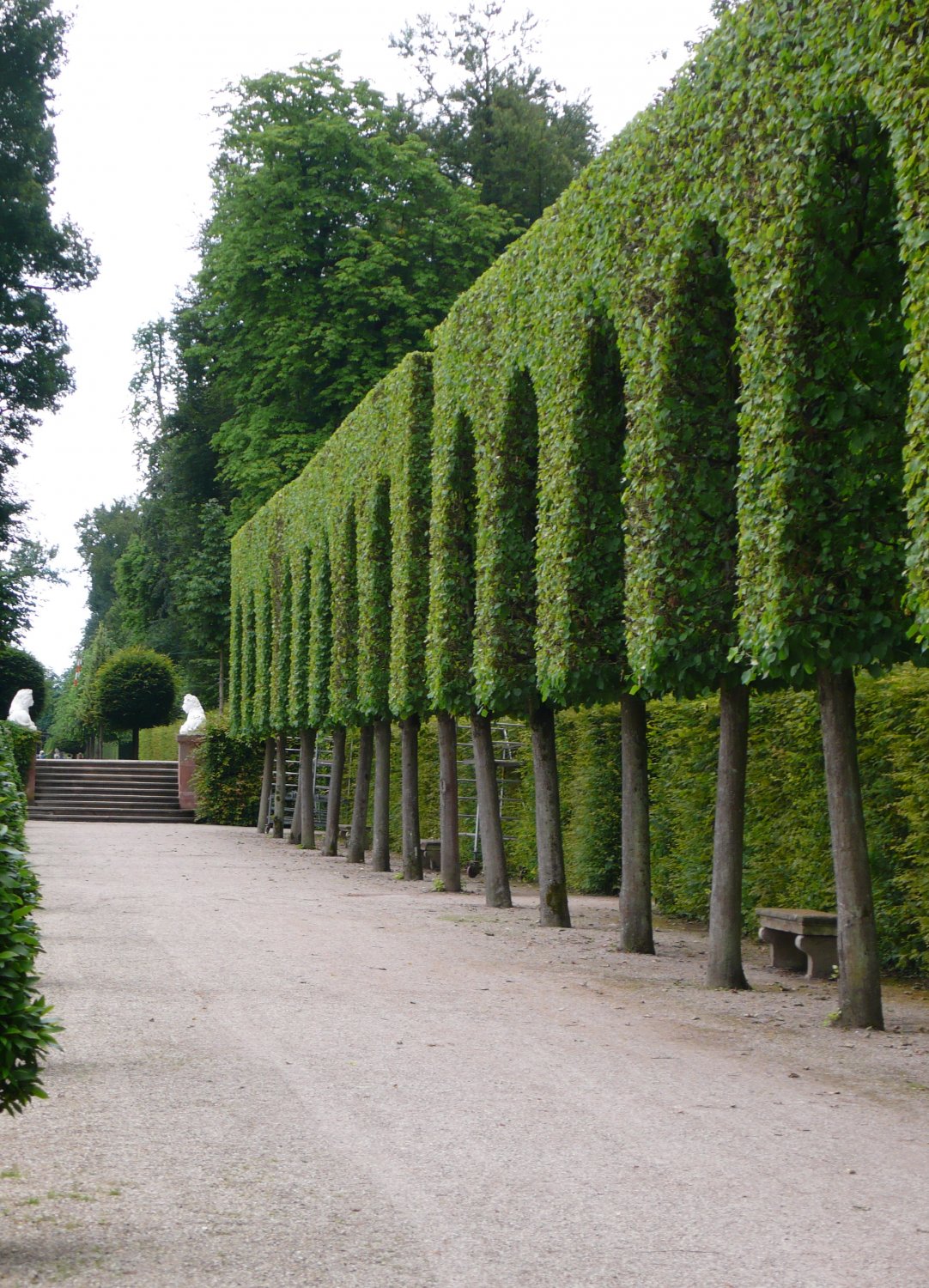 Surveyors had discovered as early as 1710 that Schwetzingen Palace was situated on a line between the Königstuhl near Heidelberg and Kalmit mountain.  A 65m wide swathe was cut through the adjacent forest to allow for a spectacular view of Mount Kalmit 40 km to the west.  To the north de Pigage extended the gardens with the orangery and parterre for pot plants and the open-air theatre with its Apollo Temple.  The extension symmetrically to the south included an orchard and the Turkish Garden around the Mosque.

Sir Friedrich Ludwig Sckell (1750-1823, knighted 1808) was the son of the court gardener in Schwetzingen and where he received his training.  Prince Elector Carl Theodor noticed his talent and financed him to study in England from 1773-1776.  After his return in 1777, he implemented his initial plan of a park landscape in the ‘English taste’ along the north side of the baroque garden.  On a stretch of 80 x 400m, he modelled the hitherto level area into a small meadow valley with a water course, scattered groups of shrubs and trees and various trees.  A walk along the winding path in the ‘Arborium Theodorium’, with its native and exotic trees, ends at the Temple of Woodland Botany.

More gardening areas, recreated as landscapes, stretch to Carl Theodor’s outdoor lecture theatre in the north-west.  To the west they border on the large square basin, and finally end in the south near the Temple of Mercury – the last folly, built 1792, in Schwetzingen Castle Gardens.

In the summer of 1795 a conclusive inspection of the gardens took place by de Pigage and Sckell in the ‘Protocollum commissionale’ and gives detailed recommendations for further maintenance.

During the introduction of the English style of landscape gardening, many existing baroque gardens in various other places in Germany were demolished. In Schwetzingen, however, both styles co-existed. With the careful reconstruction of the rectangular basin  into a ‘natural’ pond, for example, a successful fusion was accomplished.

In the electoral times, Schwetzingen Castle Gardens were open to the public free of charge.  That changed in 2016 but it did not keep 750.000 visitors from coming to see and enjoy the gardens.

With thanks to Mrs. Erna Geschwind for organizing this visit.

Taxus for Topiary The royal garden at Wilanów – an EBTS introduction

The royal garden at Wilanów – an EBTS introduction