One might question the hubris of describing one’s own work as a ‘sort of Pevsner for gardens’ (Sir Nikolaus Pevsner, art and architecture historian and author of  The Buildings of England (1951–74), often simply referred to as ‘Pevsner’).  Pevsner made it perverse to enter any county without the relevant Buildings of England volume on the passenger seat, next to the Ordnance Survey –  a killer app which guided one through each architectural notable.  The bone dry erudition left one to discover the human and topographical genius loci for oneself, however, and the most pleasure was to be found in the introductions where the county story and its national context were synthesised. 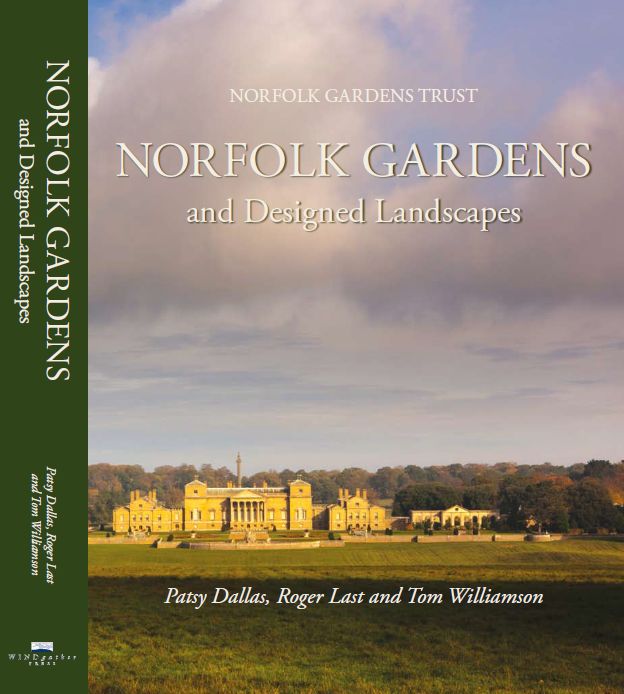 Few gardens and landscapes were included in detail.  This gap in the shelf needed to be filled, and some high level attempts have been made such as the English Heritage Register, the Good Gardens Guide, and occasional slim volumes describing the most important gardens of a county.  The sheer depth and spread of the Norfolk Garden Trust and East Anglia University’s achievement in cataloguing over 300 Norfolk gardens is a hugely ambitious feat.  It is also a monument to Roger Last’s tenacity and public spirit over 16 years in bringing this volume to publication.  A garden creator himself, he also contributed many of the valuable photographs and researched the maps and plans which bring the less visible gardens to life.  For this is a compendium of both what is still in good order and what has been lost to development, as will always be the case with an art form that grows, decays and often disappears over time.

The excellent introduction by academics Tom Williamson and Patsy Dallas is, like Pevsner, a tour through English Garden History as exemplified by Norfolk, but Norfolk Gardens successfully expands on Pevsner’s original format.  Each garden is brought to life by an academically accurate history, an evocative description of the layout and key architectural and horticultural features of the gardens further sprinkled with local anecdote.  Here the book follows more in the tradition of Francis Blomefield’s unfinished Topographical Essays of 1805 (An essay towards a topographical history of the county of Norfolk: containing a description of the towns, villages, and hamlets, with the foundations of monasteries, churches, chapels, chantries, and other religious buildings.  ‘Blomefield, Francis, 1705-1752;  Parkin, Charles 1689-1765), where family machinations are, as in life, mixed with the movement of land.  What family intrigue led to Oxburgh Hall being sold after 500 years of family tenure, then to be bought back by the Dowager Lady Bedingfeld and immediately bequeathed to the National Trust?  That one of the ‘Hitler Oaks’ – given out as saplings to Gold Medallists at the 1936 Olympic Games – is still alive at the environmental centre, How Hill, is another human gem amongst many.

The use of Kip and Knyff ( Jan Kip and Leonard Kniff famous for their bird’s eye views of great English country houses.  Their major work was Britannia Illustrata (1708).) is supported by original hand drawn plans by designers like Gertrude Jekyll.  The Norfolk School etchings are referred to and there is even a lovely modern aerial painting of Nathaniel Bacon’s Stiffkey by Anthony Green, R.A. The authors note the difficulty in being objective in choosing the more recent gardens, but they have chosen some excellent new designers as well as those as well known as Piet Oudolf, whose first design for a public landscape was at the nature reserve at Pensthorpe Park, Fakenham.

The book is a valuable resource to anyone interested in the holistic history of the designed landscape.  It is is Pevsner and more.  The Gardens Trusts work hard to catalogue, value, and so help to protect our heritage gardens, and it would be wonderful if other counties could find sufficient resources to produce their own ‘Last on Gardens’.

This review was originally published in Topiarius Volume 18 Summer 2014 on page 54.

The Treatment of Buxaceae A Rothschild Renaissance reviewed by Elizabeth Braimbridge