The five Gardens in East Anglia selected by our tour organisers Di & Neil Cave were spread across Norfolk, Suffolk & North Essex and ranged from a large domestic garden to the grounds of a stately home.  Although the weather forecast seemed to change by the hour, we only got wet a couple of times and that wasn’t enough to dampen the EBTS UK members spirits!

We met at The Moat House, Little Saxham, Bury St Edmunds, Suffolk by the owners of the house and garden. Richard and Suzanne Mason who explained the history of the house and how the garden had been developed. We were then able wander round the beautifully laid out and exquisitely keep grounds.  There was a good selection of expertly clipped  yew and box containing formal and informal planting in a number of different styles. 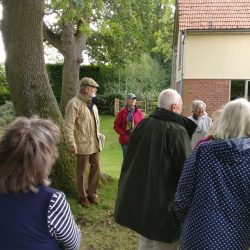 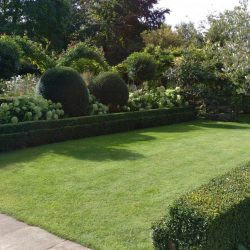 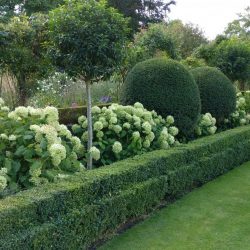 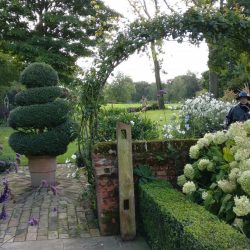 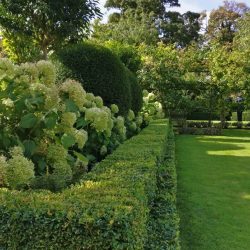 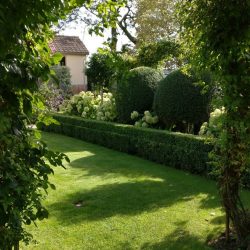 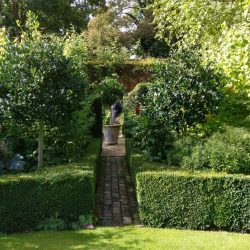 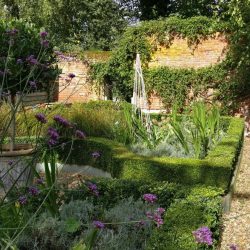 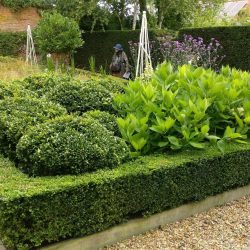 Ousden House, near Newmarket, described as ‘spectacular’ and ‘exceptional’ when it was opened in 2014, after 20 years of work by owners Mr & Mrs Robinson who very kindly showed us round the 8 acre garden.  Topiary, mainly of box and yew, was used both structurally and decoratively.  There is a spectacular long double crinkle crankle hedge of yew, along with many other features such as the long moat garden, sheltered by cloud pruned yew, and the courtyard garden.

Towards the end of the visit, the heavens opened and we retreated to kitchen where we were made welcome with lemonade and biscuits.

Our next stop was lunch at the Lidgate Star where we had a very good two course meal and a pint of local Ale.

The next venue was Ickworth House (in the ‘care’ of the National Trust).  The principle objective of our visit was to hear from the Outdoor Manager, Sean Reid, about the action the NT was taking to restore the extensive hedges, which have been described to be of crucial aesthetic importance.  Unfortunately the Trust which used to be the custodians of a National Boxwood Collection at Ickworth, up until it was badly affected by blight, has now, in conjunction with RHS started ripping out 200 year old boxwood plants.  This didn’t sit well with the EBTS UK members, most of whom were also NT members and Sean Reid tried to defend the Trusts plans against strong, but polite, comment & questions.  As if an omen of the bad news, thunder rumbled all around us and towards the end of the visit the heavens opened.

EBTS UK will be writing to the Chair of the NT to register it’s objections to the current plans, particularly as it is to be used as the model for other Trust properties management of boxwood.  Potentially the Trust could end up removing historically important boxwood parterres and hedges, replacing them with alternative plants which would not be historically correct – not something they would consider were it to be inside one their properties.

Dinner at The Thurlow Cock

Di & Neil had arranged for the group to meet up in the evening for a meal at The Cock Inn, Thurlow.  The Inn is run by Alex Bourne and his team who made us all feel very welcome and served three excellent courses of food.

We travelled south of Ickworth to visit two more gardens, the first being Spencers, Great Yeldham, where we met by the owner Lynne Bogie and a delightful array of tea/coffee cake & scones.  The romantic eighteenth century garden is notable for its history which Lynne explained as she guided us around the grounds.  The walled garden was laid out by Lady Anne Spencer, granddaughter of the first Duke of Marlborough, who also had the house built.  The walled garden has been renovated by Tom Stuart-Smith and in one corner he added his own design flare – a clover lawn.  Unfortunately this isn’t the easiest of things to maintain so it is being updated with a box parterre shaped in a clover design – the box is due to be planted next year.  Some members will recall Lord ‘Rab’ Butler, who lived there in the 1970s and 1980s and gave his name to the delphiniums growing there.

After a woodland walk we had a wonderful lunch hosted by the owners.

Owner Annie Turner & her gardener welcomed us to the last garden of the day, and what a treat it was.  Featured in ‘Hortus’ and ‘Country Life’ amongst other journals the three-acre formal garden surrounds the fifteenth century house and comprise topiary, mixed borders, potager and pond (part of the original moat). The lawn was dominated by a huge and ancient topiary yew.  Some of the garden buildings are recent, but are of interest, having been designed by Charles Morris, who designed the Orchard Room at Highgrove House for our principal patron, HRH the Prince of Wales.  To round the day off we were treated to a homemade tea & cakes.

Thanks is extended to all the owners who made us so welcome in their gardens and took the time to show us around.  Also a huge thank you to Di & Neil Cave for choosing such wonderful gardens to visit and organising the whole event.