A number of people have emailed EBTS UK with their experiences of this years box moth invasion and how they have dealt with it.  Below are some of their thoughts, observations and questions.

Wanted to know what to do with the moths that had been caught in the pheromone traps, this wasn’t a problem to start with as she was only catching a couple of moths.  However between 12-30th August she caught around 320 moths.

Dispatching the Moths
The pheromones traps don’t kill the moths, just trap them, and there were no instructions on how to empty them.  The BuxaTraps Karen is using are the type that don’t have water in the bottom, but seem to be very effective at luring in the male moths.  The BuxaTrap pheromone lure lasts 3 month where as some other types of traps only work for 6 weeks so they need to be change more regularly to keep them effective.  The problem is the traps are filling up (around 30-50 moths a day sometimes) so need to be emptied each morning.  The option our Chairman has used is to empty the trap collector contents into a plastic bag that you have punctured with small holes along the bottom.  Once the contents are in the bag either hold the end closed or use a plastic bag clip before placing a heavy book on top of plastic bag and which will dispatch any live moths quickly.  Then dispose of in the general waste.

How to empty a pheromone trap

How long do the moths survive in the trap?
This will very much depend on where the trap is place and how hot it gets, if it is in the sun the moths will die quite quickly because of the heat.  BuxaTraps only trap the moths, they don’t actively kill them.

Some other manufacturers traps have water in the collection bucket so the moths drown, though with the numbers being caught, the water can get clogged up quite quickly. 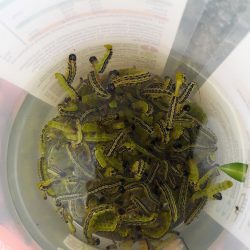 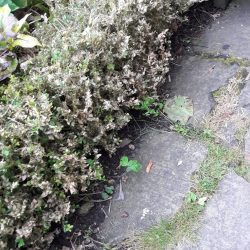 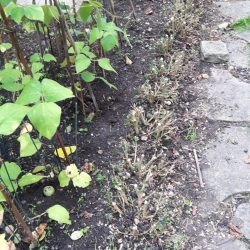 Around 12th August Karen decided to pruned the hedges 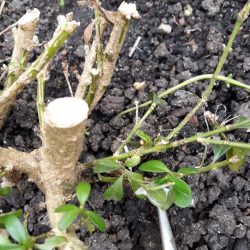 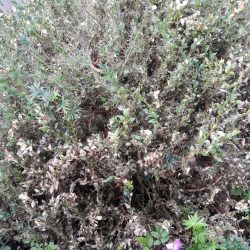 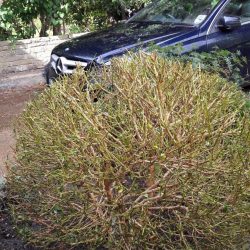 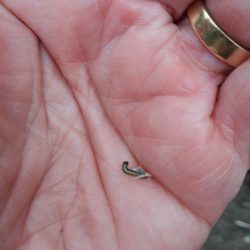 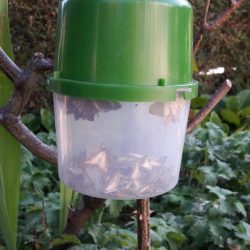 Around 30 male moths in the trap 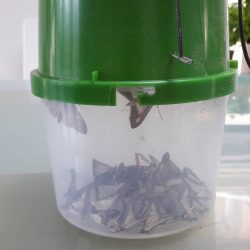 Close up of full trap - some moths still alive

Pruning affected plants
Karen decide to prune the hedges to remove most of the infected branches.  EBTS doesn’t recommend this as the plants will grow back if the caterpillars haven’t eaten the bark on the stems.  You will however have a rather ugly looking bush until the new growth appears.  In Karen’s case, assuming there are no frosts, she waters the plants (if the weather is very hot & dry) and feeds the plants (Topbuxus Grow or an equivalent), there is a reasonable chance they will green up in the spring.

Dedicated worker
Karen described the efforts she has made to rid her plant of the infestation:

After pruning back as far as necessary, which in the case of my large ball is back to the branch framework,  I power hosed (not effective – the caterpillars and webs are very resilient), then sprayed with Provado and did a daily inspection of all the plants to pick off caterpillars and larvae.  I separated the leaves stuck flat together with tweezers to remove the webbing with tiny grubs inside. This took an hour a day for about 10 days.  I removed hundreds of caterpillars and the grubs inside the silk cocoon despite all the pruning back.

Something Positive
‘We … discovered that one of the plants in our front hedge was box, as it too was infected.  For thirty years I had thought it was privet as it had larger and darker leaves than the box I had planted!’

Karen is going to let us know how things go and hopefully we will see some beautiful green bushes by springtime next year.

I have read your webpage with interest and I reckon that the infestation that has devastated my box hedges this summer is due to the Cydalima perspectalis moth.  My garden is in the Ariége department of south west France near the Pyrenees.

Could you advise me whether I should use the various spraying methods you list or the  Topbuxus XenTari biological insecticide as a treatment?  Do you know if I can purchase these in France and if so, where?

I am naturally hoping the moth infestation has not killed all of my box hedges.  What do you think?

This summer, the weather in south west France has been hot with only a limited amount of rain. 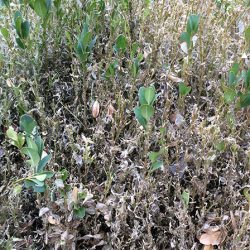 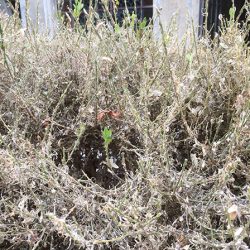 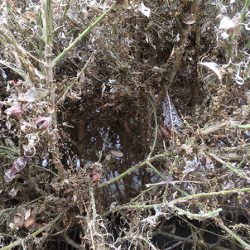 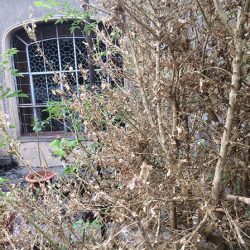 We advised Andrew that he shouldn’t give up on his plants, that the XenTari had proven to be very effective with members who had used it and was safe around plants, animals and bees, he should clean up the caterpillar mess on his plants, feed/water them and setup pheromone traps.  We also suggested he might like to contact our colleagues in EBTS France for further local advise and that the products were available via Amazon.fr

Note: Currently Bt based products (like XenTari) are not registered for domestic use in the UK, they are available for use by professionals.

And thanks for the ray of hope that I may have not lost my beautiful box hedges. They have never been troubled by anything before during the 13 years we have owned the garden.  In fact, box grows naturally on mountains nearby and the box in our garden has always been very healthy.

We thought at first, the box was suffering from a late frost – although we have many frosts each winter with no adverse effect to the leaves.

But by July, I was alarmed at the dramatic increase in patches of bare twigs on the bushes all over the garden.  And then during the past two weeks the situation has become much worse.

The sight of the devastation is most upsetting.

So thanks again for your advice and I assure you I will not give up hope!

Hopefully next spring he will be able to send us pictures of his newly revived box bushes.

This year has seen a significant increase in moths and caterpillars to the West of London, however this is nothing compared to the report Mark sent us.  His water mill is in the Tarn Valley in the South of France and he sent the following pictures and information about the effects on his plants and the surrounding area.

When was the moth/caterpillar first spotted?

My gardener first reported seeing some damage in April. This wasn’t extensive. I arrived at the end of June and there was no activity. (Pupating?). 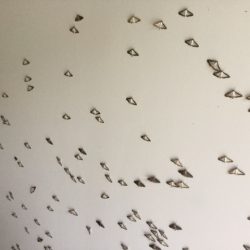 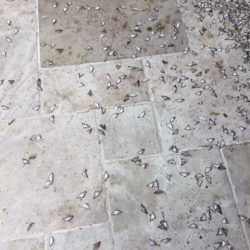 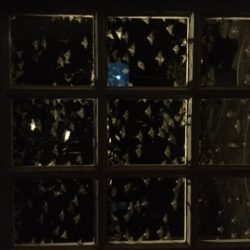 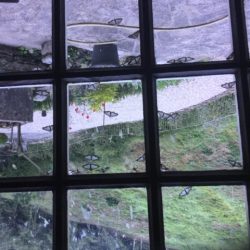 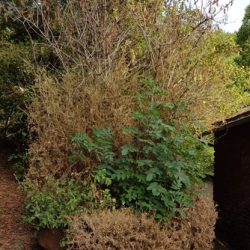 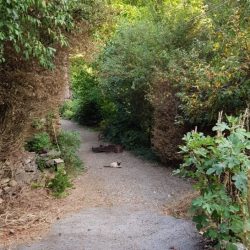 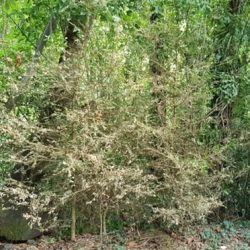 How quickly did their numbers build to the level in the pictures?

In early July I noticed a lot of caterpillars in my garden box and many of the summer houses along the tarn valley had large hedges that looked dead and stripped – as the owners weren’t present.  Wild box was also dying in places.  I sprayed regularly with bug clear ultra and bought pheromone traps.  Not all the caterpillars died but many did.  The traps caught one or 2 moths per night.  My friend who lives 5 miles away said he was removing them by the bucket load and most of his box looked dead.

I returned to England for the first few weeks of August.  When I returned in mid August the woods and gardens were full of clouds of moths feeding nectar from wild and garden flowers such as budleja, dahlias and rudbeckia.  Anything with a flower on.  At night they swarmed to lights by the thousands. The pheromone traps caught hundreds every few hours.  I couldn’t empty them fast enough. 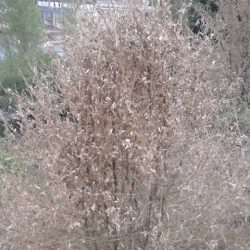 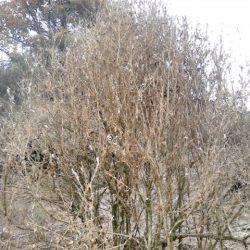 Is there wild box in the Tarn Valley & the Aveyron area that is infested and causing greater infestations because it isn’t being controlled?

The wild box has certainly made matters worse, there was quite a lot but now 80% is gone and the next round of caterpillars will wipe out the rest.  The uninhabited summer houses have also made matters worse.  Most have some box hedge and most was untreated.  Year round residents were spraying and using pheromones like me, but have now given up in face of unmanageable numbers.

Because the leaves are waxy the pesticide washes off.

Don’t know anybody who used the bacteria défense.

Is there any official local reaction to the infestation and are the local press picking up on the potential damage to historic gardens in the area?

I’m unaware of any official response, it has never been anything like this in the past and only the August bloom was massive.  So maybe too soon.  The infestation covers at least a 25 mile run down the tarn valley from Millau to Albi but I think it is probably more widespread than this.  We are 2 miles from the tarn.

Only two other observations, most species of moths attracted to swimming pool lights at night drown quickly but these are waxy and seem to be able to take off again after landing in the water.  So you can’t attract them with light and drown them.

The ones that get attracted to outside lights get exhausted and most die by the next morning so leaving outside lights on helps a bit but against these numbers doesn’t touch the sides.

Hopefully I can save some of my smallest, newest border hedges with weekly spraying in the hope that, with all the wild box dead, the population will crash next year to manageable levels.

Back in May an ex-colleague contacted me to say that for the second year his box hedge had been attacked by caterpillars.  The hedge was looking very sorry for itself, however he sent a follow up pictures in August that show what can be done by keeping an eagle eye, spraying and feeding your plants. 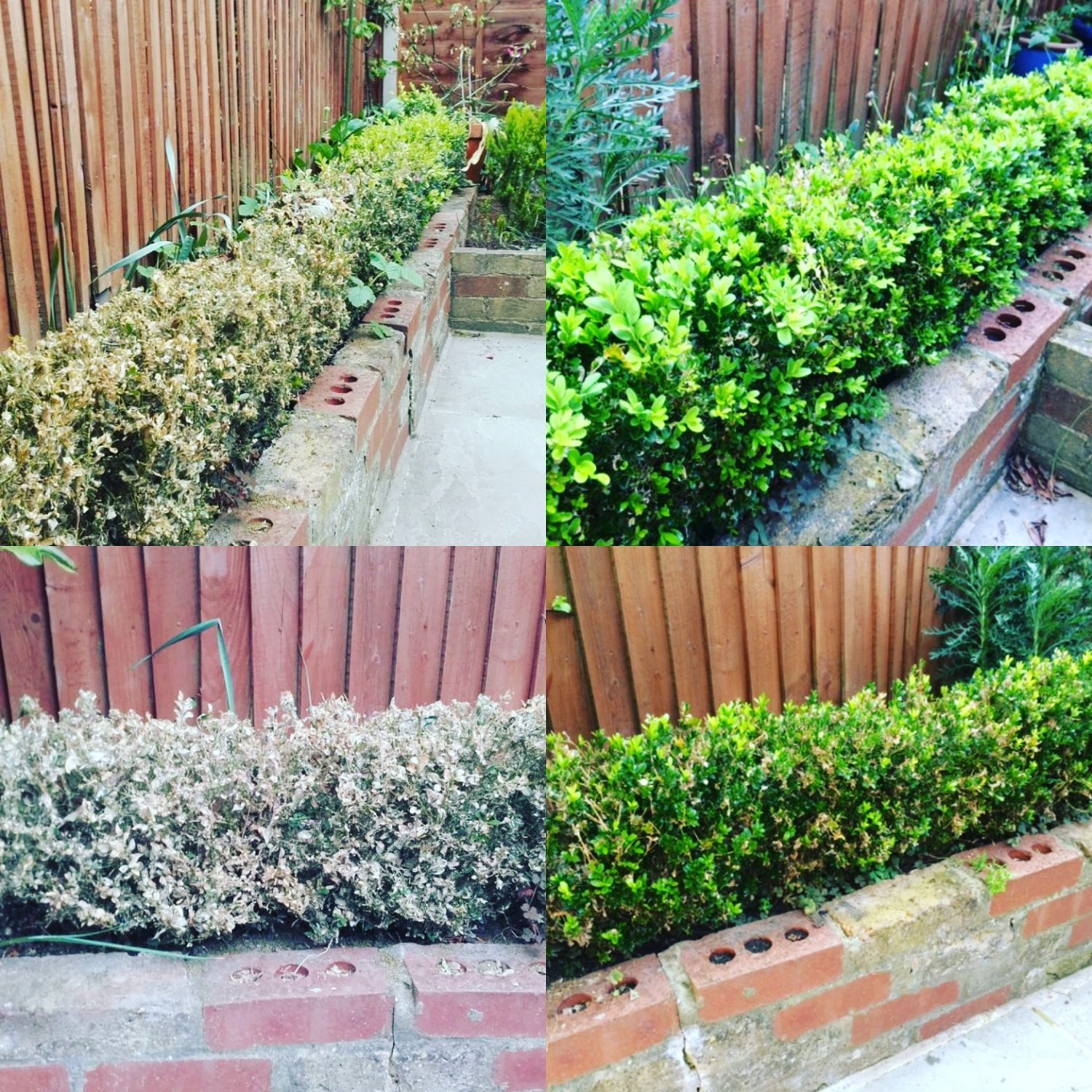 Thanks very much to Karen, Andrew, Mark & Iain for their thought and pictures on of how their gardens have been affected by the Box Moth/Caterpillars.

The key thing to remember in the UK is that if enough of us use well maintained pheromone traps, spray as necessary and keep a watchful eye, we can probably manage the issue in domestic gardens.  It remains to be seen how larger gardens and wildlife areas such as the Chilterns will handle the advancing problem and this is something EBTS UK is following up.