Finally, good news for amateur gardeners and box enthusiasts across the world that a Dutch company, Topbuxus, with an exciting range of Box maintenance and disease preventive products were a finalist and runner-up for ‘Best New 2017 UK  Retail Product (Growing)’ at the Garden Retail Awards in London.

Prior to the Awards ceremony, several presentations of the products for interested parties were held at the Judith Blacklock Flower School, Knightsbridge by Adrie van Dun (Topbuxus Managing Director) & Wout Van Gils (Global Account Manager).  Their products  have  exciting prospects for ordinary gardeners, as there is now a means to look after their Box in a safe way the same as other garden shrubs like roses which are regularly cared for with a range of user-friendly products.

The company is one of the leading growers of box hedging plants in Europe with 12 million plants covering 50-hectares.  Adrie van Dun explained that in 2000 he was advised that he should try spraying his plants with copper after he cut them.  The idea being that the copper burnt any dangerous fungus spores that might be around and thus reduce the possibility of infection.

Having tried this each time the hedging plants were trimmed (twice a year) he found that infection rates did reduce.  For the next 10 years he tried different strengths of the natural fungicide along with mixing in nutrients and by 2010 he had perfected a product that has now been in use for 7 years on their buxus hedging plants.

During the presentation Wout explained that the health of the plants wasn’t the only benefit of their process, which reduces spraying  from around 20-22 times a year with traditional chemicals to just 5 or 6, thus saving effort and cost.  Another plus is that the spray includes all the nutrients the plants need thus saving even more time and effort.

Whilst this process does not in itself kill off box blight, research has shown that the plants put on good leaf and stem growth and allows the plants to naturally fight off infection very effectively due to their good health.

In 2014 the effectiveness of the two part Topbuxus process (Health-Mix & straw) was put to the test.  Areas of boxwood plants were treated as recommended by product companies and the results can be seen from the DLV report below. 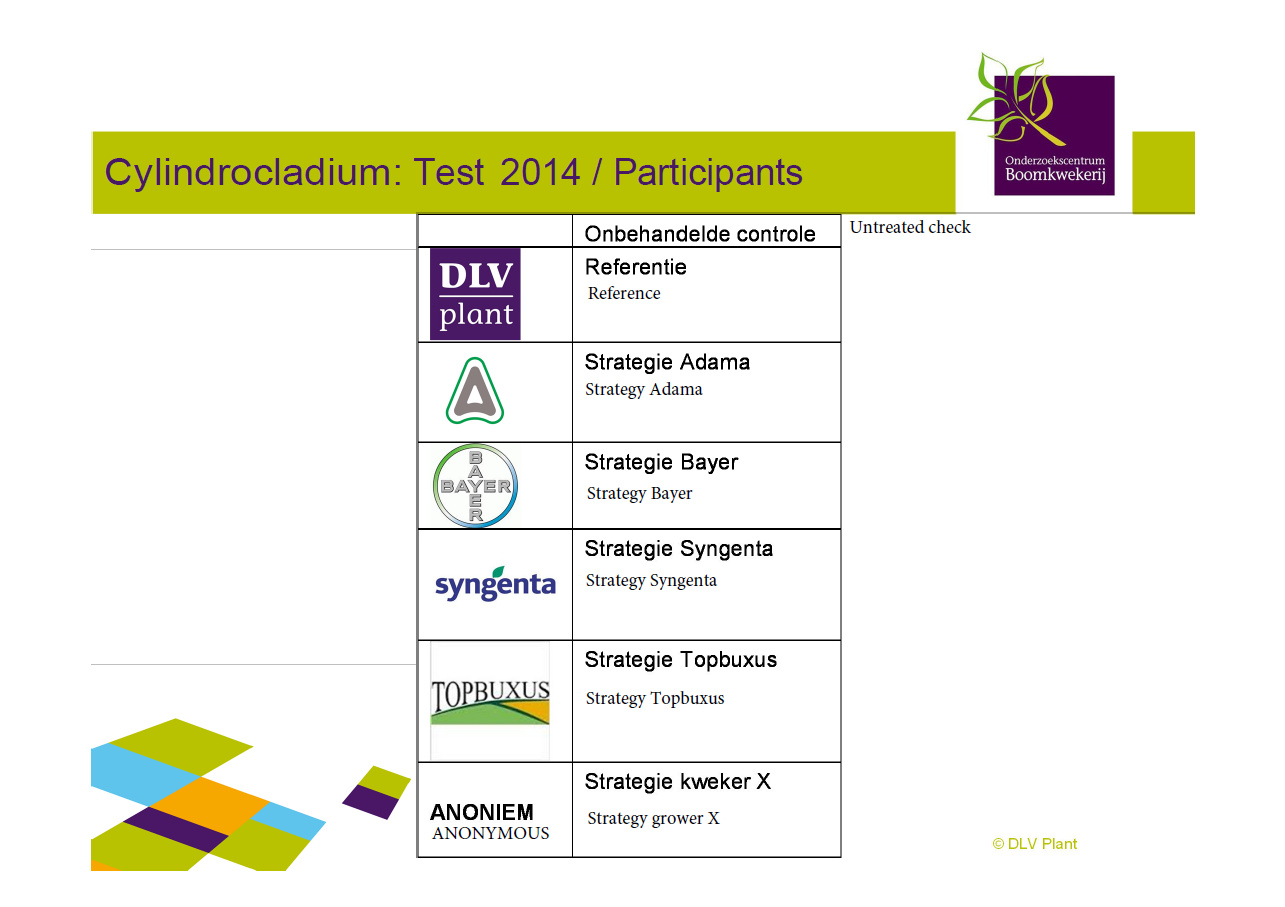 Companies in the trial 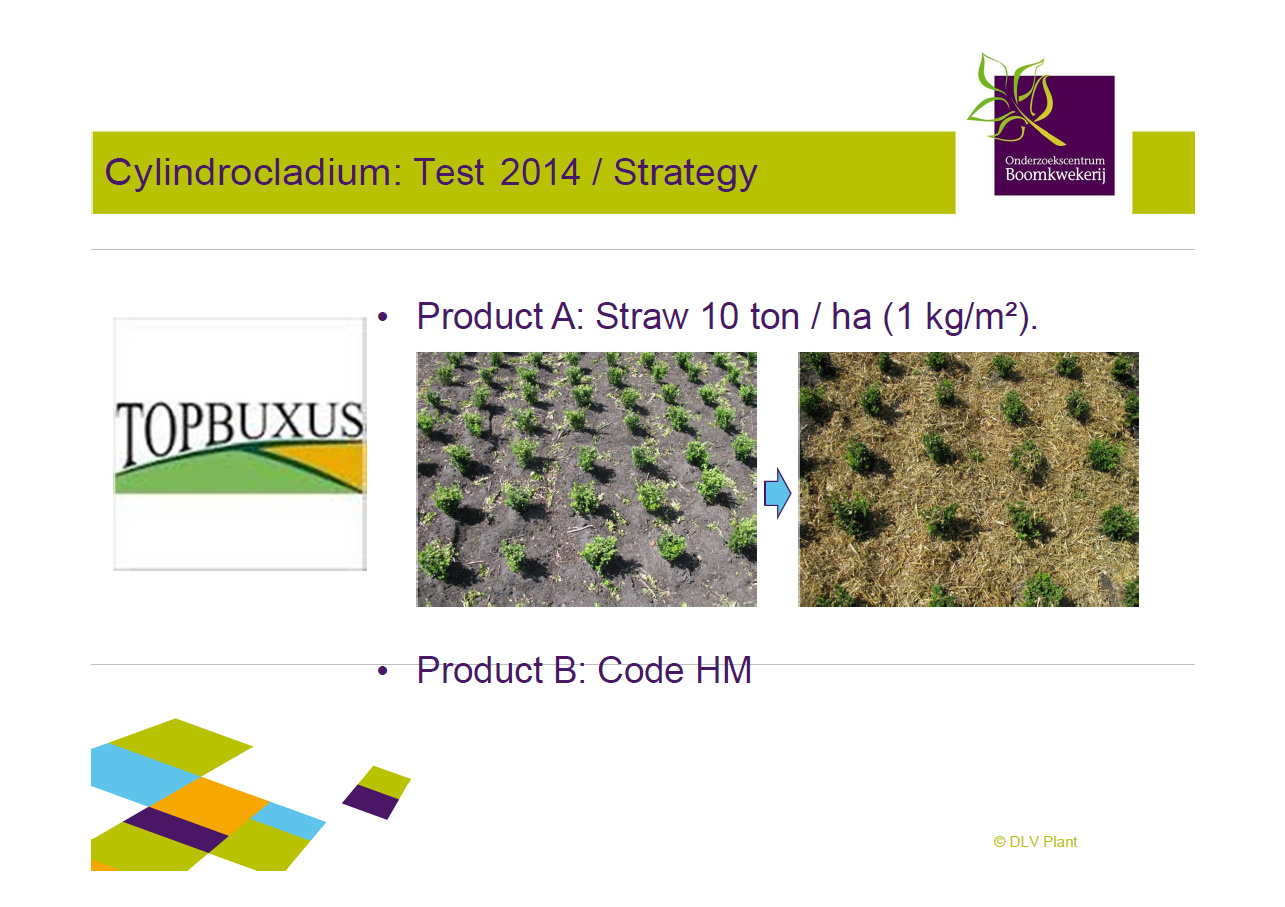 Topbuxus use of straw between plants 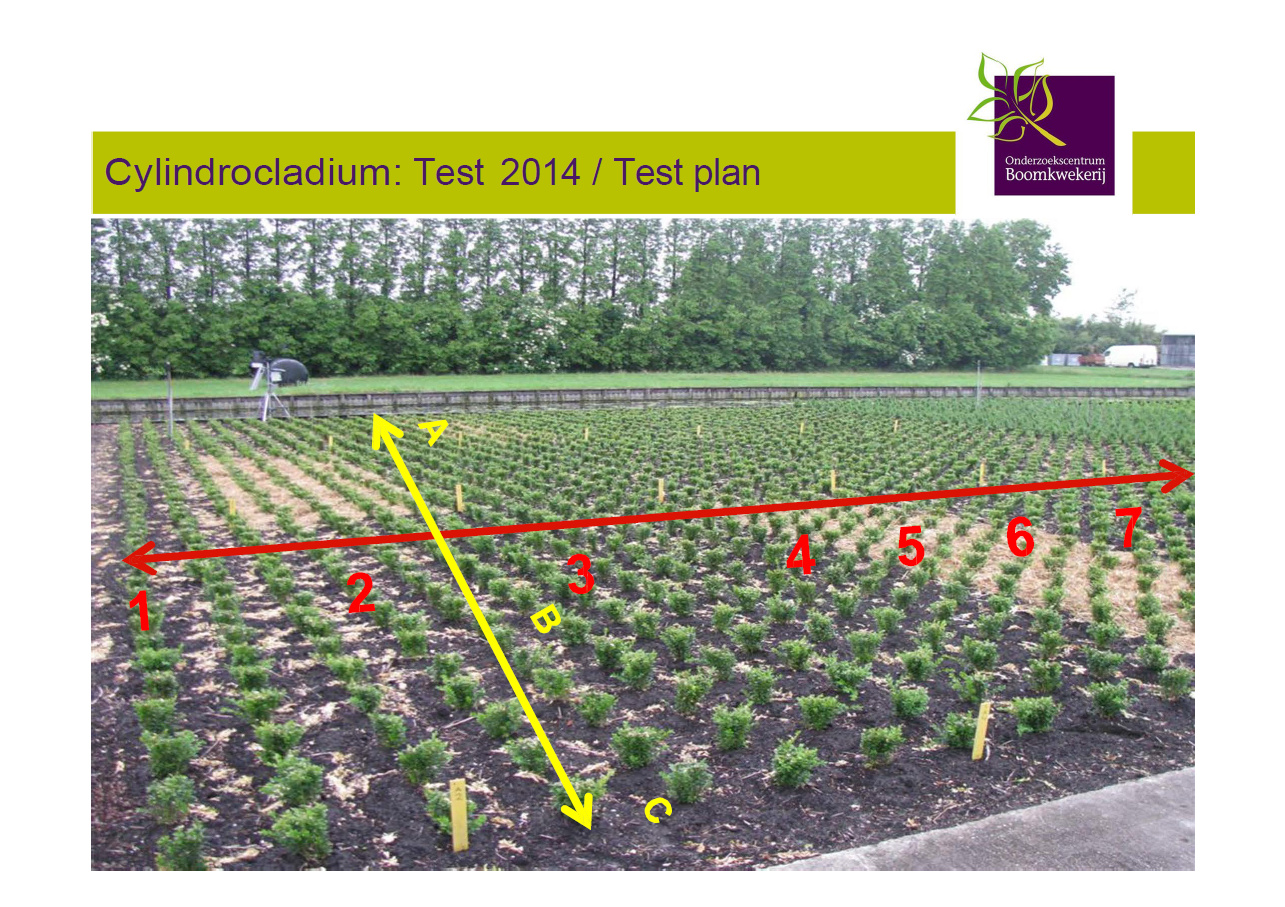 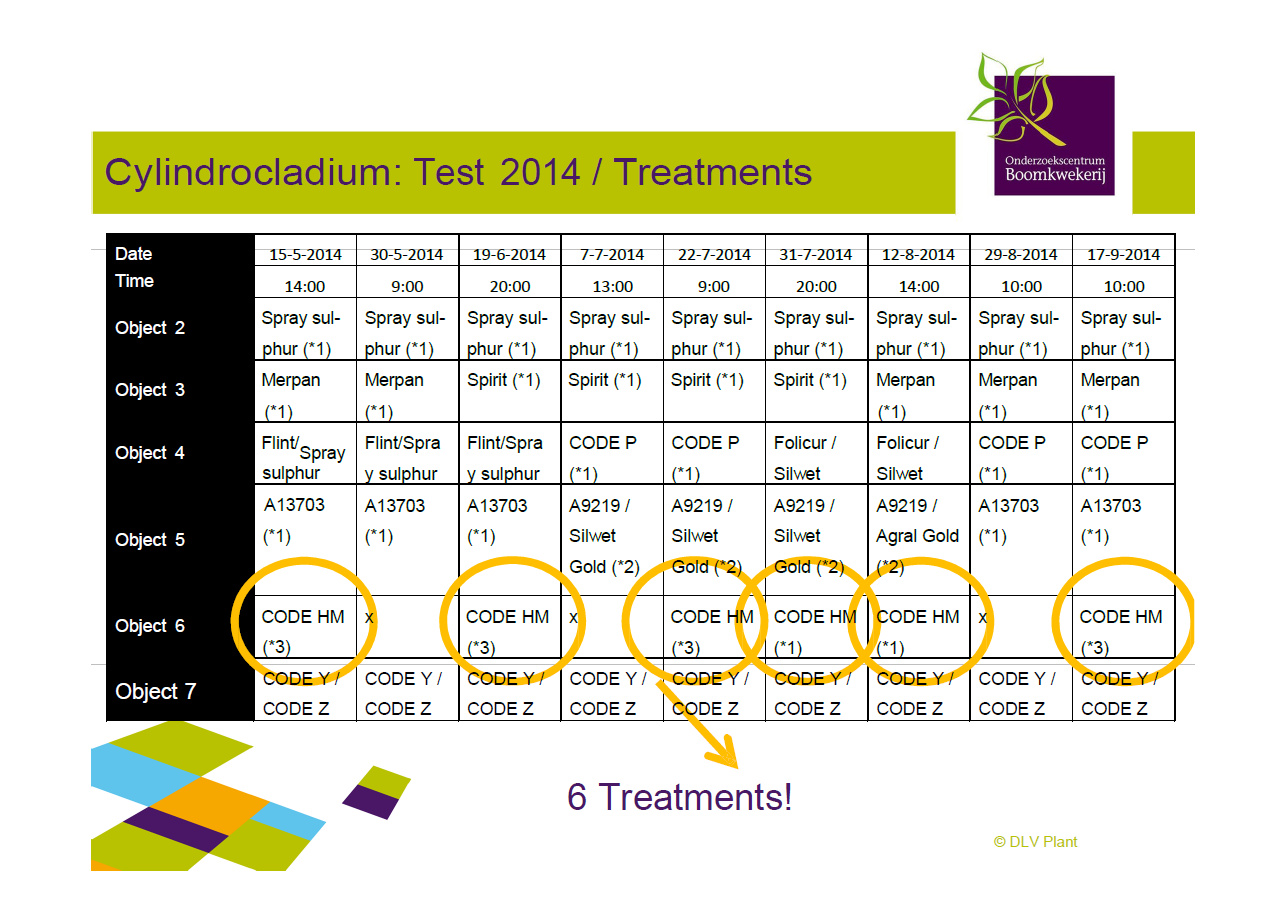 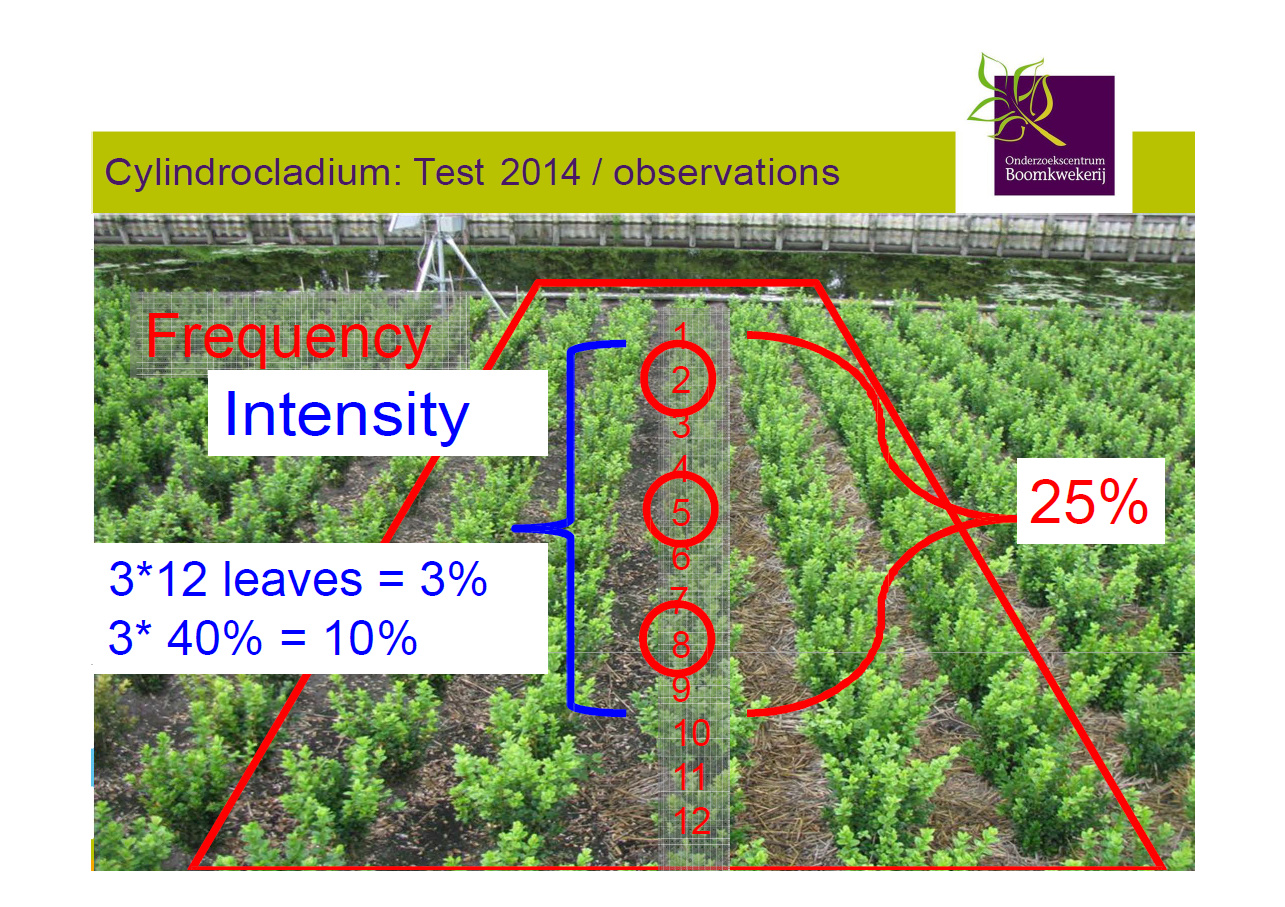 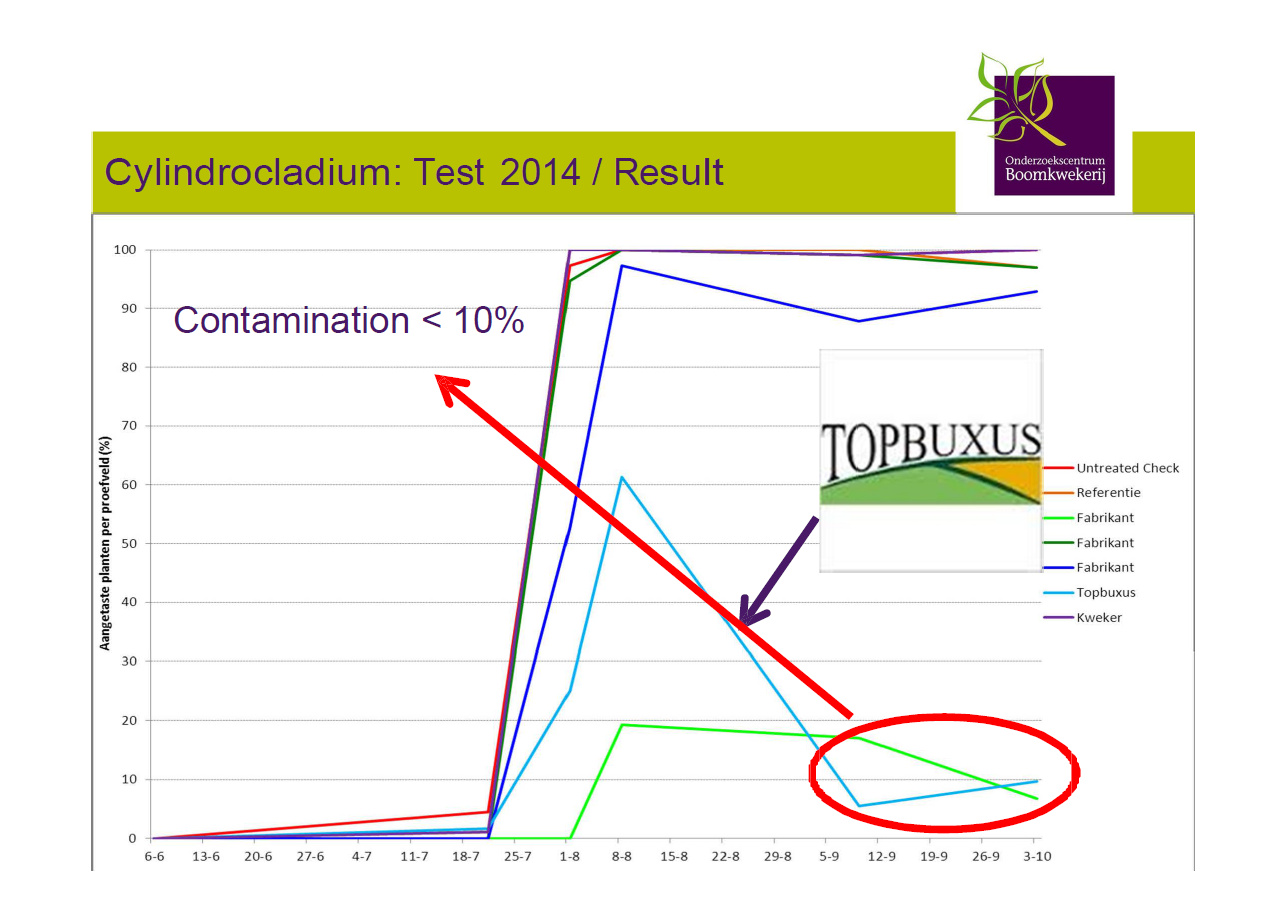 Since these test, Topbuxus have added to their range a product called ‘Grow’ which is an additional treatment that is used two or three times a year and this aims to give the plants a good burst of nutrients in their growth phases.  The granules are applied below the plants as it it contains a lot of sulphur which would burn the Box if it touched the leaves.  ‘Grow’ is fast-acting and dissolves very quickly, this is the opposite of what a lot of consumers find on the market and use on their Box i.e. long lasting and slowly releasing and thus doesn’t give the boost during growth phases ensuring strong growth and intense deep green leaves.

Health-Mix, which is supplied as effervescent tablets, is sprayed on the plants as a folio feed around 5 or 6 times a year, particularly after clipping.  Spaying after cutting has been found to greatly enhance plants abilities to fight off infection as it contains the elements that burn the spores of the fungus.

‘Carpet’ is their latest product and aims, at a domestic level, to emulate the straw used in their trials.  This has the effect of stopping water splashing up from the ground under the plants which might have fungal spores in it.  The straw stops the splashing, dries out quickly and longer term helps with soil conditioning.  The product Topbuxus have produced is easy to apply under and around plants and will last 2-3 years before needing to be replaced.  There are other products available which could have a similar effect, such as ‘Strulch’ for example and if you have a supply of straw or pine needles then these work effectively as well.

Whilst EBTS UK does not directly endorse any particular products, a number of members have reported success with using the Topbuxus range over a number of years and the logic of their philosophy of keeping plants healthy to fend off disease will ring true with most gardeners.