Back in February last year EBTS UK approached M2i to find out more about the products they produce that control Box Tree Moths (BTM).  At the time, the one we were most interested in wasn’t available in the UK, though it was on sale in various European countries.  The good news is that it is now registered in the UK and should be going on sale to professional users soon.  It has also recently gained registration in Germany and the Netherlands.

Chris Poole, EBTS UK Chairman, arranged a UK trial of the product which were undertaken and managed by EBTS within Ham House Garden (National Trust) under special arrangement and we’d like thank Syngenta UK who paid for the products used in the trial  – Phero Pump + 6 sachets.

What does it do and how does it work?

The product is a mating disruptor that stops the males fertilising the females so they don’t produce fertilised eggs that would go on to become caterpillars.  It does this by using a pheromone that smells of the female moth, the same stuff (z-11-hexadecenal) that is in the lures used in traps, but 50 times more potent.  This has the effect of making everything in the area smell of female BTM and consequently the male moths can’t locate the real females.

How is it applied?

The design is very clever as it uses a sachet of the pheromone that contains around 250 doses that is put into a cylinder that uses air pressure to to force the product out of the applicator tube.  The pressure is produced using a car foot pump or bicycle pump rather than using propellants that might harm the atmosphere.

To achieve disruption, the number of doses depends on the size and shape of your Buxus plants, on the low hedges at Ham House it was applied at a rate of one dose every 2m and two doses to each of the Cherry Garden cones.

Each application lasts around 3 months so normally in the UK two applications a year would be required, one in May and the second in August.  It was applied at Ham House on 23 June, before any moths were caught, as the flights were late due to weather conditions. 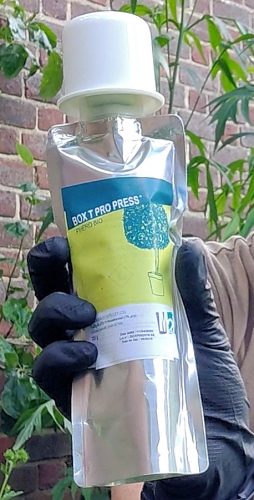 When will we see results?

In this trial, we should start to see, or more accurately not see, new caterpillars anytime now as they have been flying for around two weeks.  Spot checks on sections of hedges and cones will be carried out and this page will be updated with the results.

Who can use it?

The product is only available for professionals to use, but as it only needs to be applied twice a year this should mean the cost to the box owners using a professional to apply it is cheaper than using alternatives like BT sprays that can require up to 8 visits a year.

UK pricing is still to be confirmed as are the distributors and suppliers, this page will be updated when we have the details.