In 2006, the first caterpillar, Cydalima perspectalis, in Central Europe was identified. It was found in Weil am Rhein and Kehl, both German inland port cities.  This substantiates the assumption that the non-native invader was introduced by sea, either on imported plants or in the chopped boxwood material used to cushion granite blocks.  Between 2007 and 2010, the moth spread in a ring around both cities, crossing the borders to Basel and Strasbourg respectively.

The devastation of unchecked moth reproduction was seen in 2010 in the Buchswald in Grenzach-Wyhlen.  Two-thirds of the largest natural box (Buxus sempervirens) woodland in Germany (150 hectares) were more or less eaten bare and have not recovered to this day. Only dry marginal areas escaped.

How to tackle the new pest?

On first arrival, the caterpillar had no predators.  Birds ate small larvae, but the larger ones were regurgitated.  This is no longer the case according to the observations by a biologist, who observed them dissecting the caterpillar’s intestinal tract beforehand eating them.  The same can be said of wasps.

Gardeners who did not uproot their box took up the fight with all kinds of mechanical, chemical, biological and even thermal methods.

For the private garden, the combination of monitoring the infestation with pheromone traps and spraying with Bacillus thuringiensis (Bt) preparations has become established in recent years. 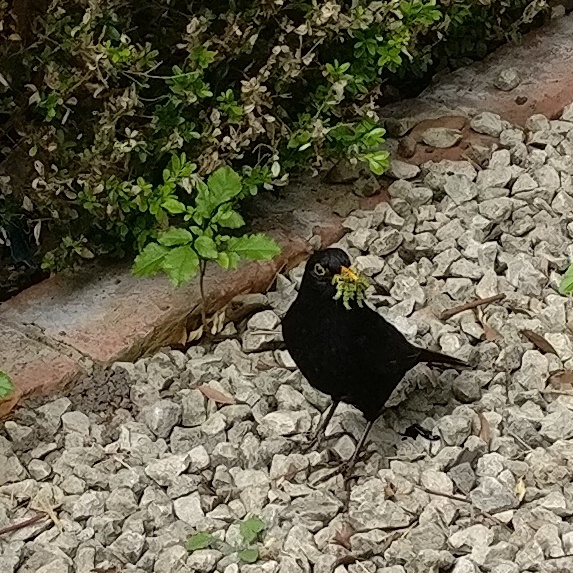 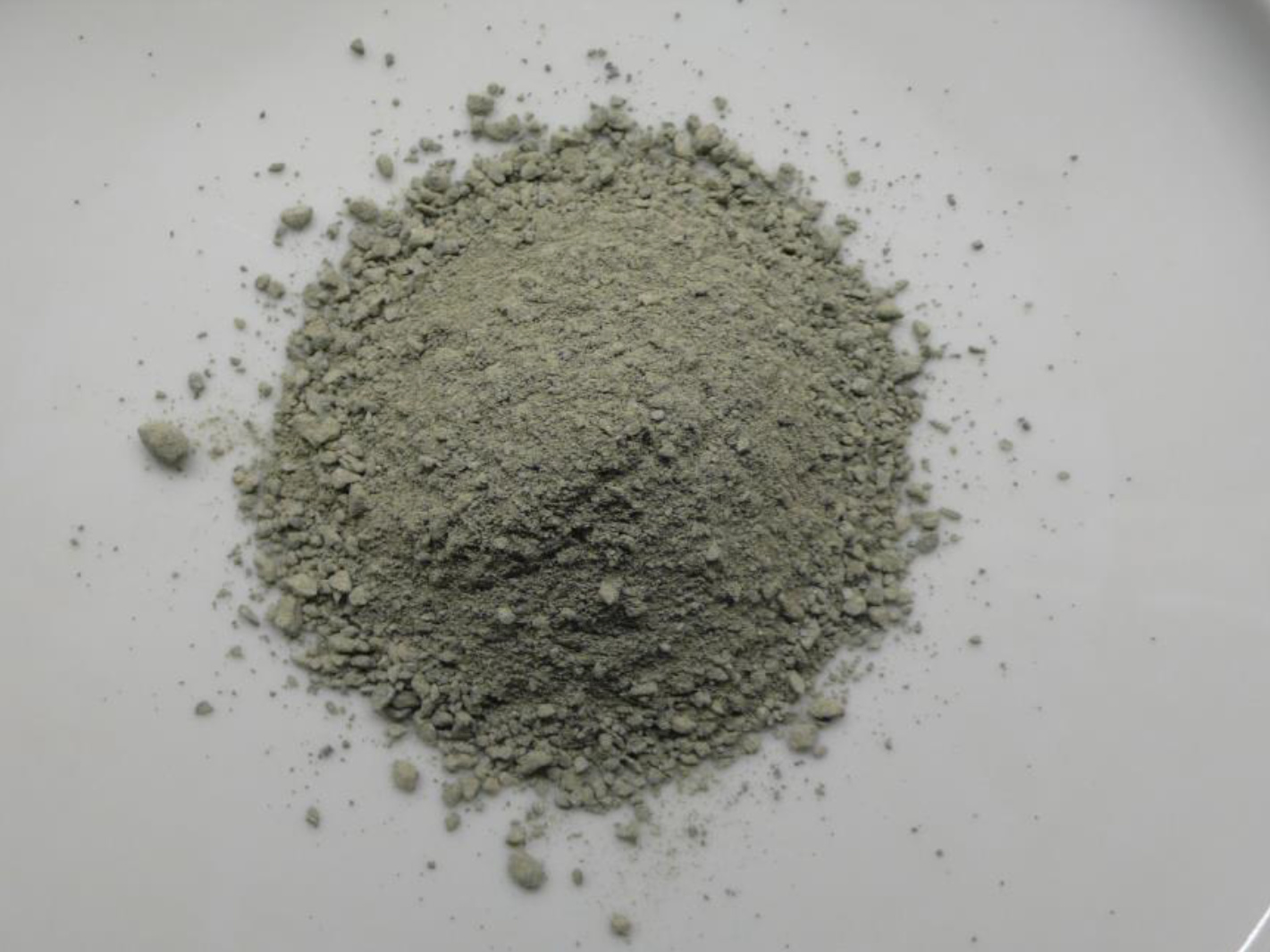 This spraying can be replaced by the use of primary rock flour. In 2012, the Atrops nursery had supplied fodder plants treated with it, among other things, for laboratory trials as part of a doctoral thesis. However, the caterpillars did not develop satisfactorily. After this incidental finding, it turned out in further trials at the nursery that the caterpillars do not continue to feed after chewing on contaminated leaves.  This is believed to be because the leaf surface covered with primary rock flour acts like sandpaper due to the silicate crystals in it and abrades the caterpillar teeth ruining their chewing jaws (mandibles).  The caterpillar does not bite into the leaf, as we do into an apple, but rasps off the surface of the leaf, which is what causes the windowing effect seen when they start feeding.

This effect can be used proactively as a dusting before egg-laying or reactively after infestation has been detected. In practice, it has been shown that the powder adheres to the leaves for a long time and one application in April and another in June is sufficient.
For dusting, take small portions of primary rock flour on the fingers and spread them closely over the entire surface of the plant while shaking. With careful shaking of the bush, the flour also reaches its inner parts. Some also use fine sieves or stuffed stockings. It is best to wear a dust mask to avoid inhalation when applying to the plants. With the next rain the grey haze will disappear from the leaf surface.

Apart from the temporary aesthetic impairment of the plant, treatment with primary rock flour offers many advantages:

The silver bullet in controlling the moth would be to prevent egg-laying to avoid any damage to our box plants – until then, let’s hope for more clever birds and keep fighting the pest.

In the UK rock flour is available from garden centres and online just search for: 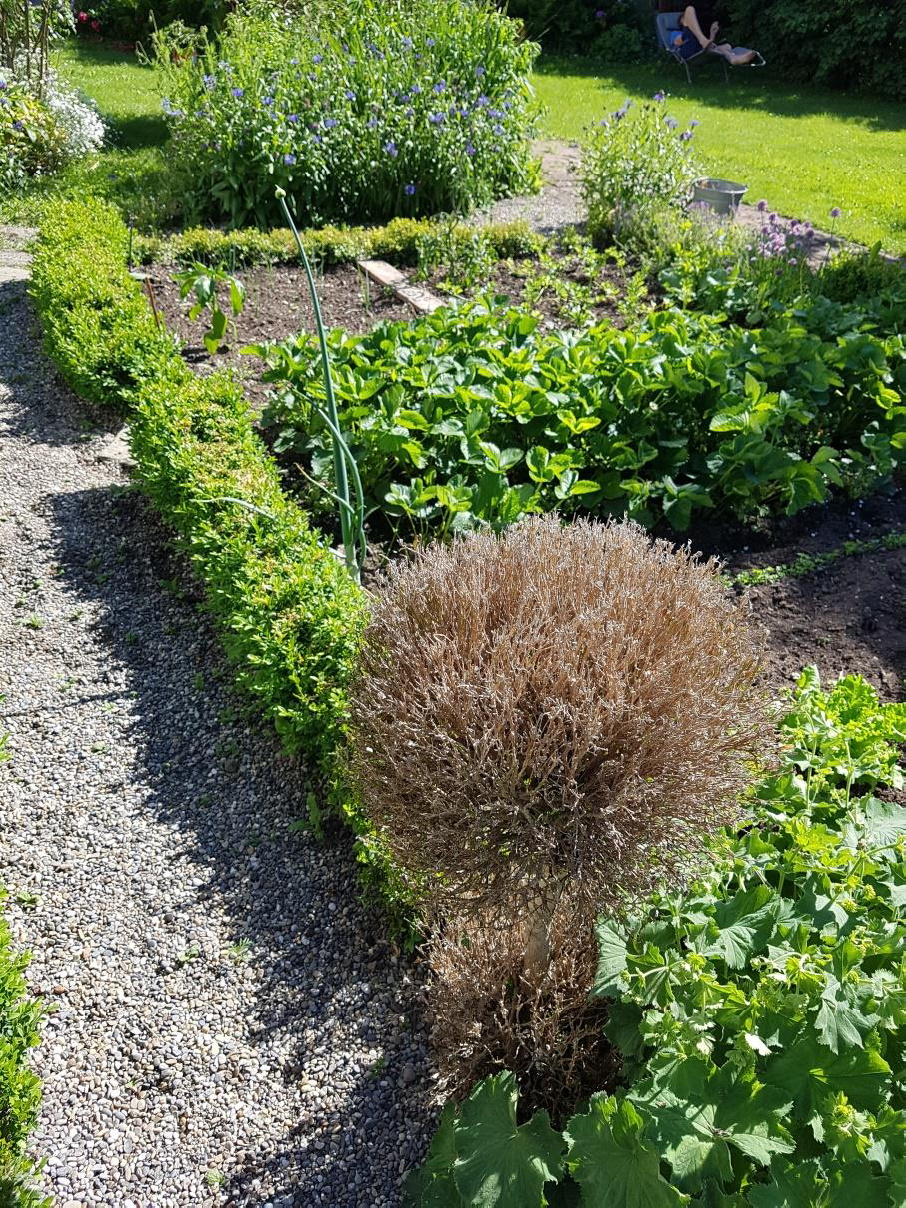 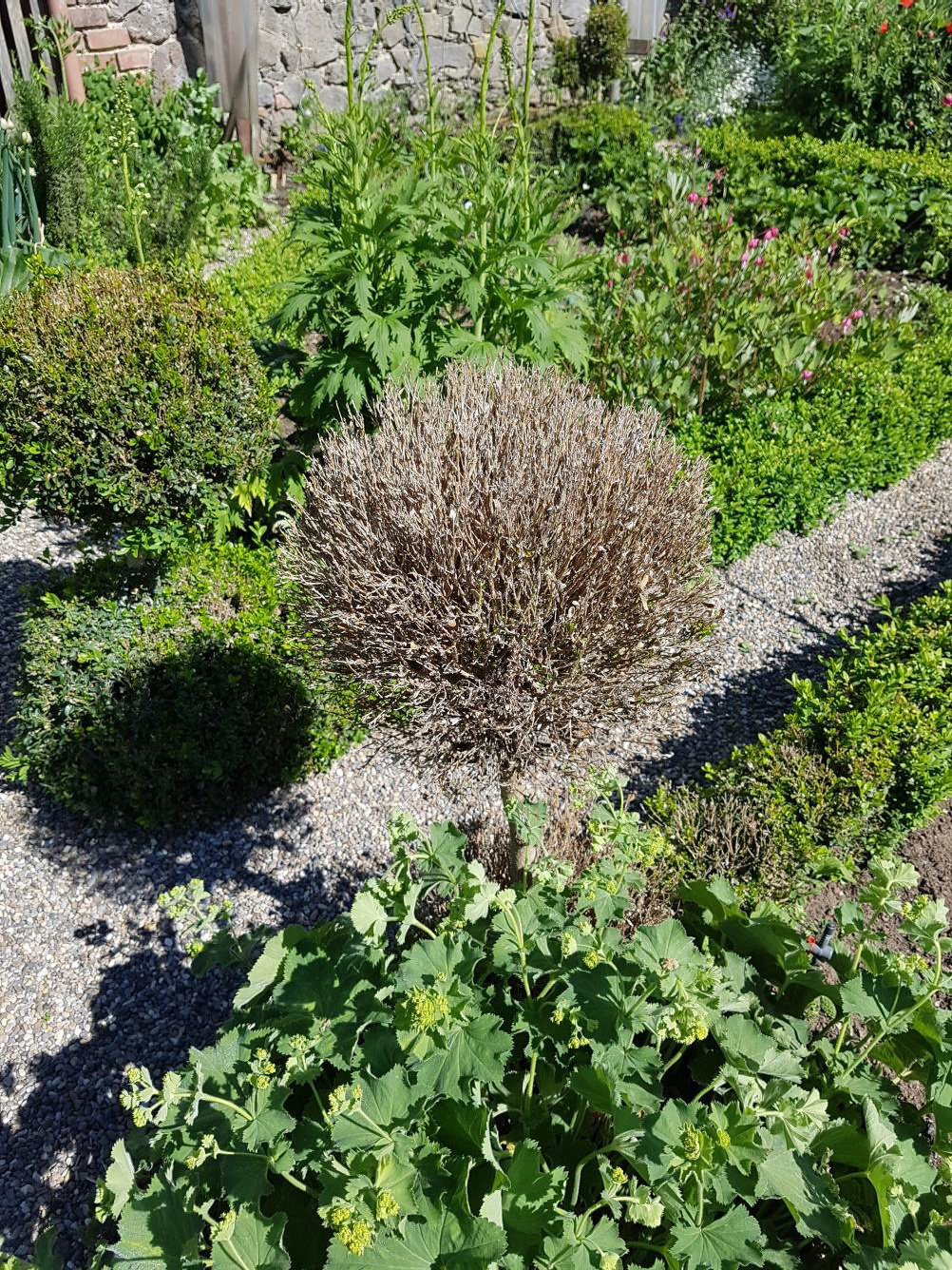 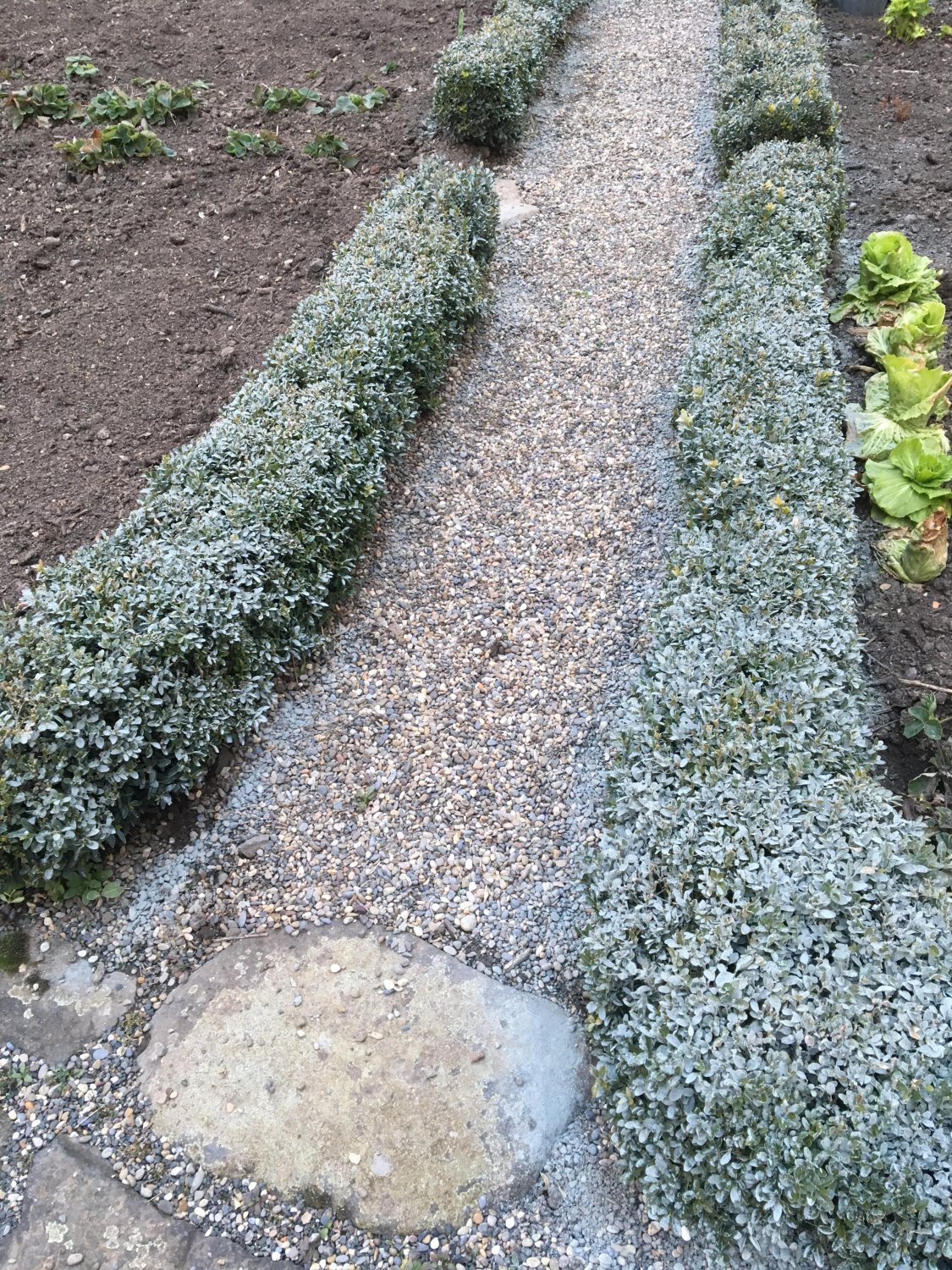 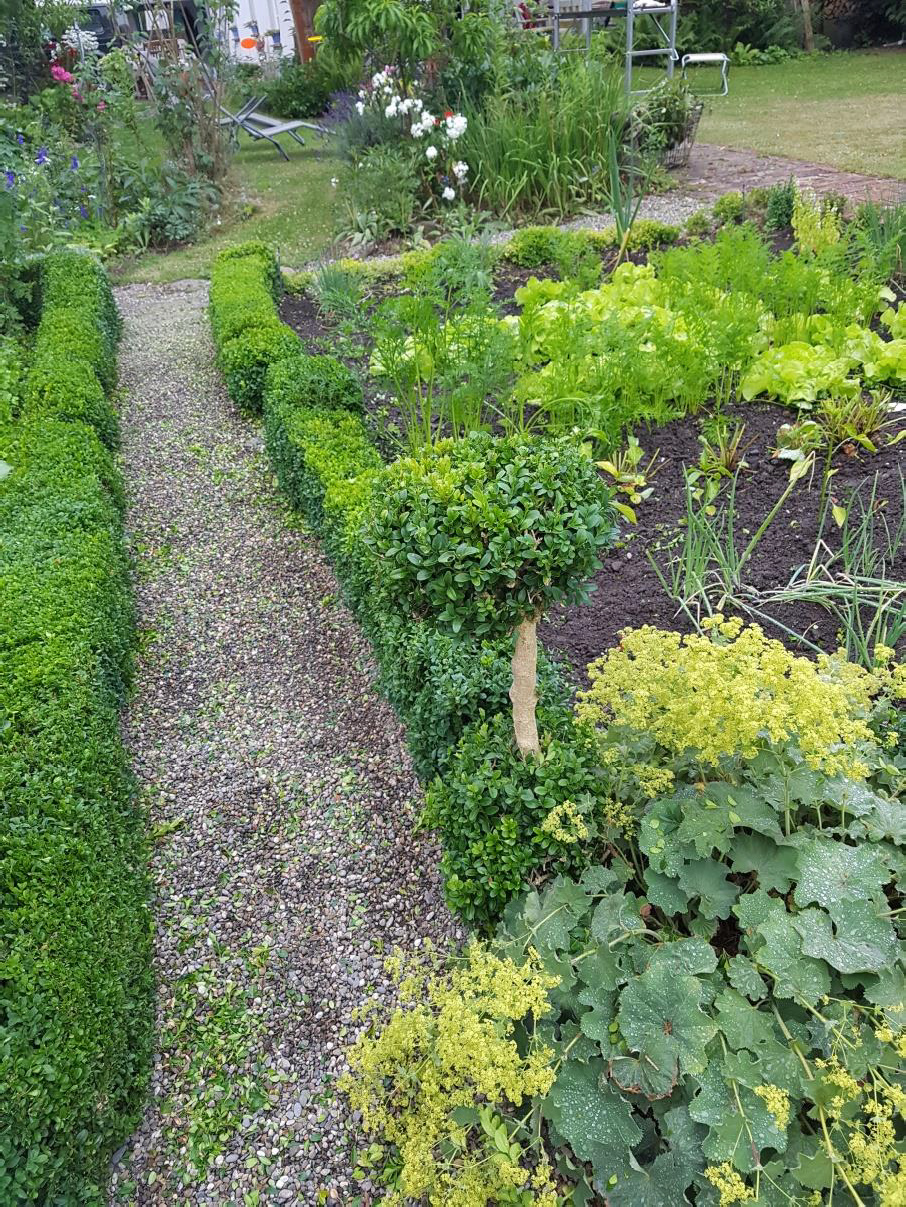 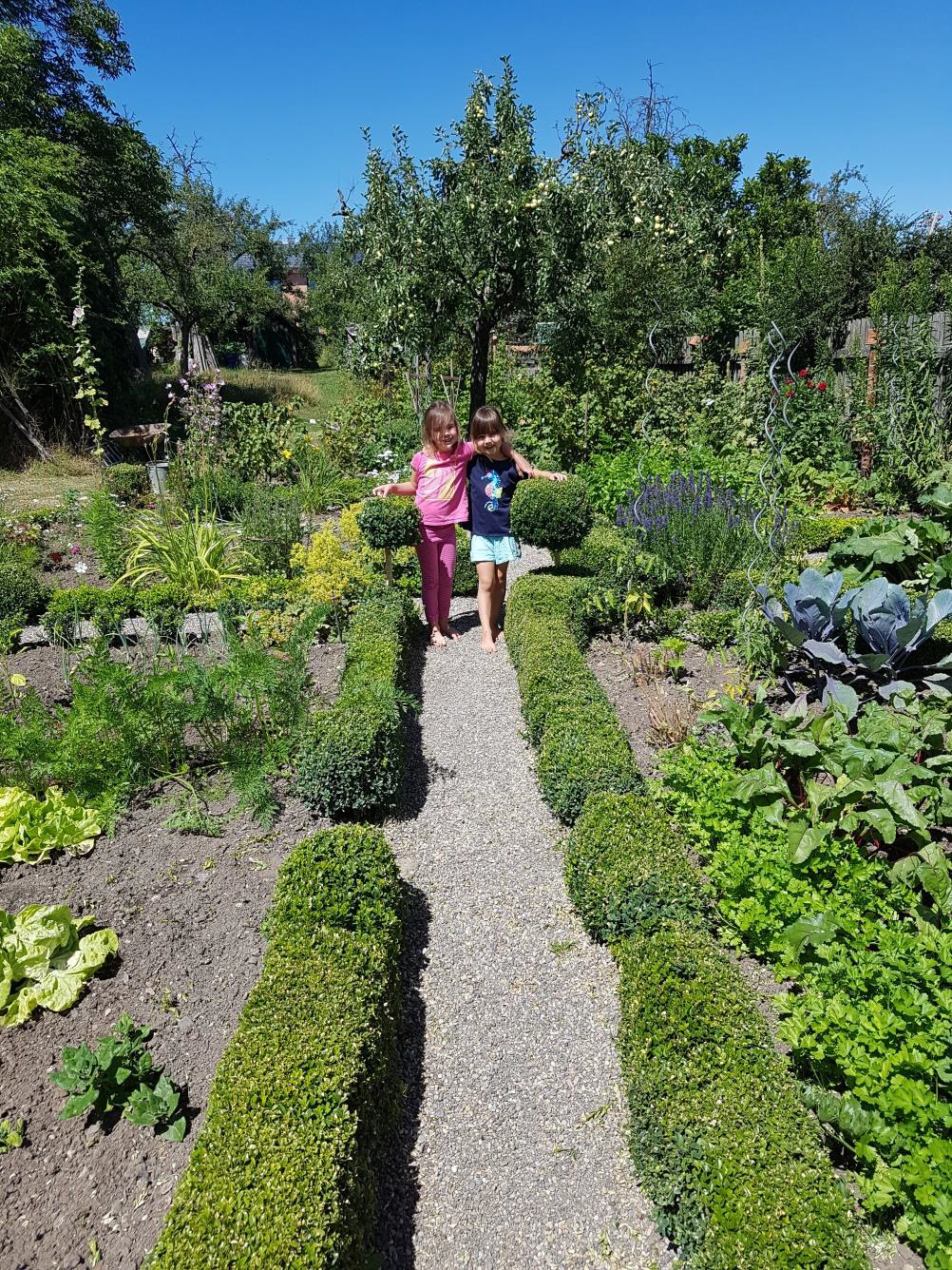 Thanks to Karla Sell, Gisela’s sister who is also a member of EBTS Germany, for the pictures.