There was a feeling of relief that the weather had cooled as our group assembled at Tyrthrop Park, near Kingsey, following the week which had seen the hottest temperatures on record. We were greeted by, Phil Kusmishko, head gardener since it was bought by the Wheeler family in 2007. Phil, who does all the plant design, was later joined by Robert, Myers, six-times Chelsea gold medallist, who redesigned parts of the garden, providing some elegant contemporary elements within an already classic framework of fine trees, countryside views, garden room, pretty garden buildings and a lovely parterre.

New works included new garden buildings, a peaceful pond, wild meadows, a mown-grass labyrinthine feature, and an astonishing modern swimming pool area marked out with clipped aerial hornbeam cubes and where a magnificent contemporary pool house has been installed. The planting, remarkable throughout the garden, is lush and cool in green and white by the pool, themed for Mrs Wheeler (Chrissie Rucker) founder of the White Company.

A further highlight was the old parterre laid out in front of the house. It is in the classic geometric pattern style with a playing-card motif, it contrasts brilliantly with a sea of lavender loosely planted in the flagstones in front of it and the distant country views with the open skyscape beyond. To note is that there has been no caterpillar or blight at Tyrthrop. Phil believes that they have been spared blight, at least, as the Buxus is in an exposed position with plenty of air circulation, also because it has become hardened through poor conditions. The parterre was planted by the previous owners through membrane and is not watered, so growth is slow and the leaves are tough and hardy. 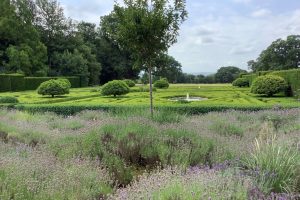 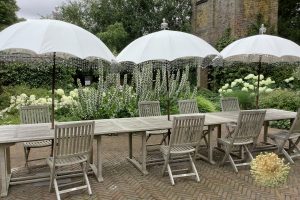 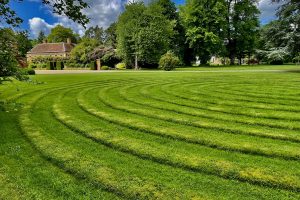 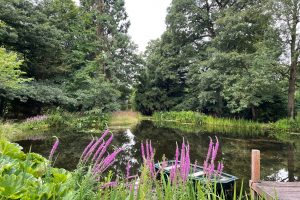 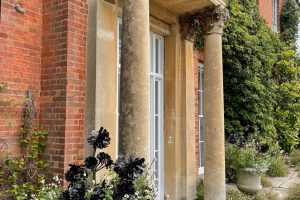 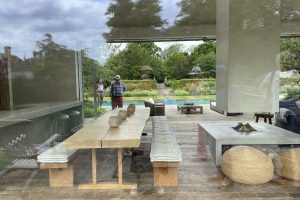 At The Manor House, Bledlow, another splendid 17th century mansion, we were met by the owner, Lord Carrington, for our afternoon visit. An enthusiastic and knowledgeable gardener, he very kindly took on the garden tour himself, entertaining us with amusing anecdotes. Although the house has belonged to the Carrington family since the 18th century, when his parents only moved in 1946, taking over from a tenant farmer, what should have been the garden was a farmyard.

The designer, Robert Adams, laid out a series of garden rooms in the Arts and Crafts style. Each has its own character and now includes a sunken pool and fountain, a traditional walled garden for produce and flowers, herbaceous borders, a boxwood parterre and the Compass garden with clipped yew hedges. In 1991, the serpentine Sculpture Garden was installed and is an ongoing project. It is gradually being populated with contemporary works half hidden by foliage. Notable amongst them, were two elephants, (one made of bam boo), a gorilla, a snail and other beasts. Our tour ended with a visit to the precipitous Lyde Garden which is now a lush bog garden but was originally a watercress bed fed by natural springs.

Luxurious home-made cakes and tea (for the second time that day as well as a pub lunch) rounded off a day to remember thanks to our most generous hosts sharing their very individual, and beautiful private family gardens with us. 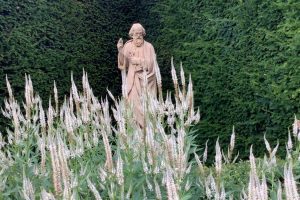 Pictures and text by Caroline Foley