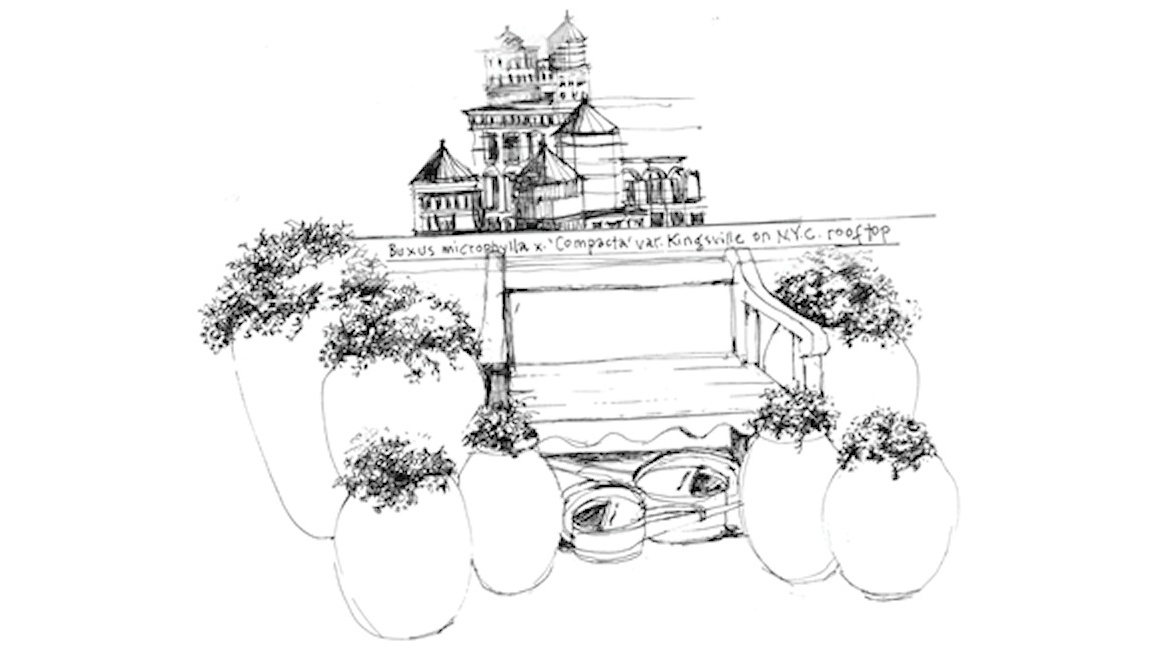 GARDEN IN THE SKY

All emerald green and topiari’d, boxwood grew to perfection in the pleasure gardens of antiquity.

But these days, the third best-selling shrub in the United States has become a twenty-first century challenge.  And not just if you garden in containers on an unforgiving urban rooftop where summer’s merciless sun and winter winds take no prisoners.

Still, to level the playing field, three years ago I was a guest of the UK’s Sustainable Food Trust, visiting Home Farm at Highgrove where pesticides, herbicides, and insecticides – as well as artificial fertilizers or additives – are things of the past.  On that day in May, heritage apple trees hummed with noisy pollinators, as dragonflies worked the ‘sewage garden’.  While another team dug up three thousand infested boxwood because even the most influential organic farm in the world could not save those kitchen garden hedges from boxwood blight.

Nevertheless, the good news is that shiny green plants of the ornamental perennial herb, germander, were being transplanted to form a scaled-down evergreen hedge that responds well to pruning – and possibly as homage to Elizabethan knot gardens where Teucrium chamaedrys was the perfect contrast to herbs with a more relaxed habit of growth.

I mention to John Ridgely, the Deputy Gardener who was showing us around, how I grow upright varieties of tree germander as punctuation marks within borders, a little like cypress hedges in the South of France.  He said he’d have a go at it in his own garden.  His own garden?  There are pros-and-cons to residing on a royal estate and John enjoys coming and going without the scrutiny.  Living in a New York City apartment building with doormen who know all of your friends, lovers, and favorite take-out Chinese restaurants, I sympathize.

In my penthouse garden where containers are considered as important as the plants, I have been gathering waist-high terracotta urns long before my visit to Highgrove, where Cretan oil jars are an impressive leitmotif, even when left unfilled.  And over the years I’ve refined techniques for planting dramatic urns – exclusively with boxwood.

With all due respect to the genus, I’m loyal to Buxus microphylla x. ‘Compacta’ var. Kingsville, a native American, named after the Kingsville Nursery in Maryland where the seedling was discovered in 1912.  This is a classic English-looking box, yet diminutive in scale and with a congested habit of growth that creates endearing bumpy mounds, just asking to be patted.  The tiny oval leaves can have an antiqued tarnished brass cast depending upon the season, and grow less than a half-inch per year – which also makes this variety a popular choice for bonsai.  So much so that nurseries incorrectly term it Japanese Kingsville Boxwood since anything bonsai-related sells better with a Japanese moniker.  However, I leave my boxwoods unpruned and maybe that’s why – knock wood – there are no signs of buxus blight.

Given that weight restrictions are a consideration on a rooftop – and because boxwood hates to be waterlogged – each urn is packed two-thirds up with foam ‘peanuts,’ shaped to interlock when compressed, and suitably recycled from Christmas cartons.  I then add a layer of landscaping cloth that prevents the lightweight peanuts from floating up into the growing medium.  The boxwood with its short, stubby trunk is positioned higher than the rim of the pot, allowing for new growth to drape over the edge, like a cozy duvet.  I fill in with additional potting soil and worm compost, and finally top dress with a mulch of coir that comes in compact bricks – easy to carry, or store for future use.

No matter how grand or humble the setting, once you’ve created the bones and planted the big picture, nothing makes a garden more personal than plants in pots.  Especially if I’m aiming for my own little garden of boxwood – high above a city where any pie in the sky idea seems possible.

This article was originally published in Topiarius Volume 18 in 2014.