In 2018 EBTS UK was contacted by a German company who wanted to do some real world trials of a potential product they were developing.  It was based on two pieces of research, one by Péter B Molnár – ‘Synthetic blend of larval frass volatiles’ and the other by Stefanie Göttig – ‘Development of eco-friendly methods for monitoring and regulating the box tree pyralid’.

Molnar’s work looked at why female moths didn’t lay eggs near active caterpillars.  He found that there were 3 elements in the volatiles given off by caterpillar frass (excrement) that caused the deterrent effect.  He then went on to created a synthetic version which he tried out in a lab using a wick and vial to allow the volatiles to escape.  Göttig was also looking into the deterrent effect but using volatiles from plant oils and extracts.  She found that Thyme extract was one of the most effective.

In the lab, both approaches worked well, reducing egg laying by around 75%.

EBTS facilitated the trials at the National Trusts, Ham House, South West London and the Getty’s Wormsley Estate in the Chilterns to see how effective the two deterrents were.  Ham House is a 17th-century estate that sits on the banks of the River Thames in Richmond with simple classic use of box hedges and yew cones.   The Wormsley Estate on the other hand has boxwood grown as a plantation for its timber as well as natural boxwood lands. 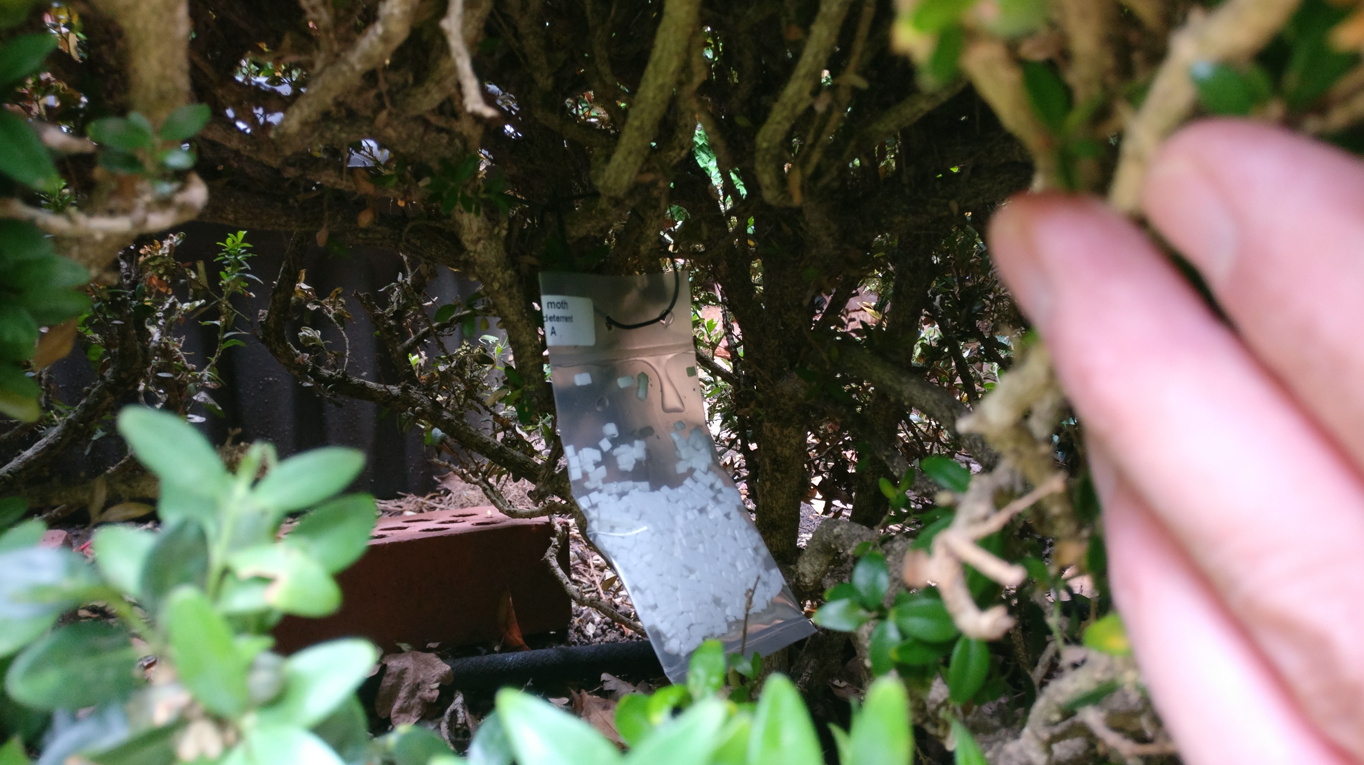 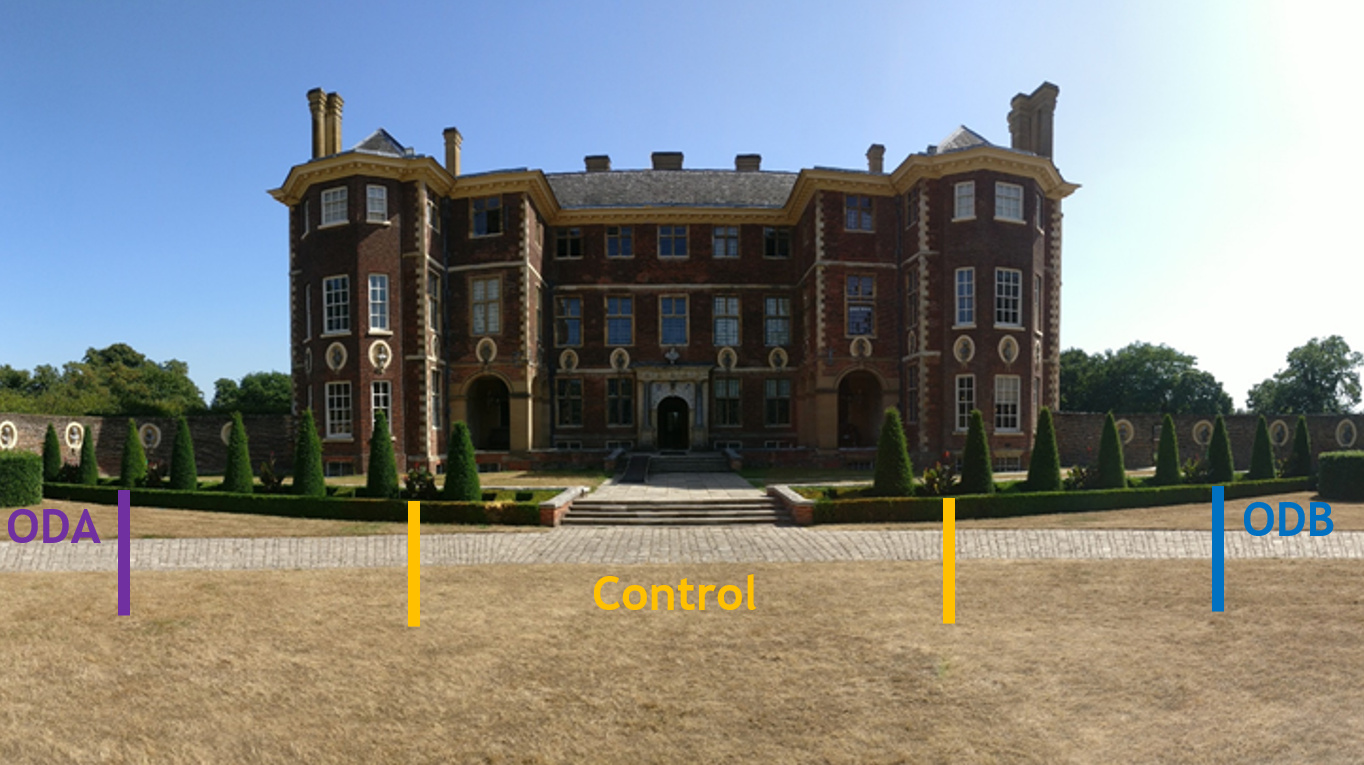 Ten of each of the trial volatiles, which were provided in gas permeable sachets, were placed at 1m spacing in the trial hedges and the sachets were replaced every 3 weeks.  This gave three areas to monitor, Oviposition Deterrent A based on the synthetic frass, the control area and Oviposition Deterrent B containing the Thyme extract.

The number of caterpillars found each week was used as the indicator of effectiveness rather than the number of eggs found.  The eggs are very small and difficult to find and are only around for 3-5 days before hatching so could easily be missed, where as the caterpillars can be more easily spotted.

So in the real world how did the volatiles do? 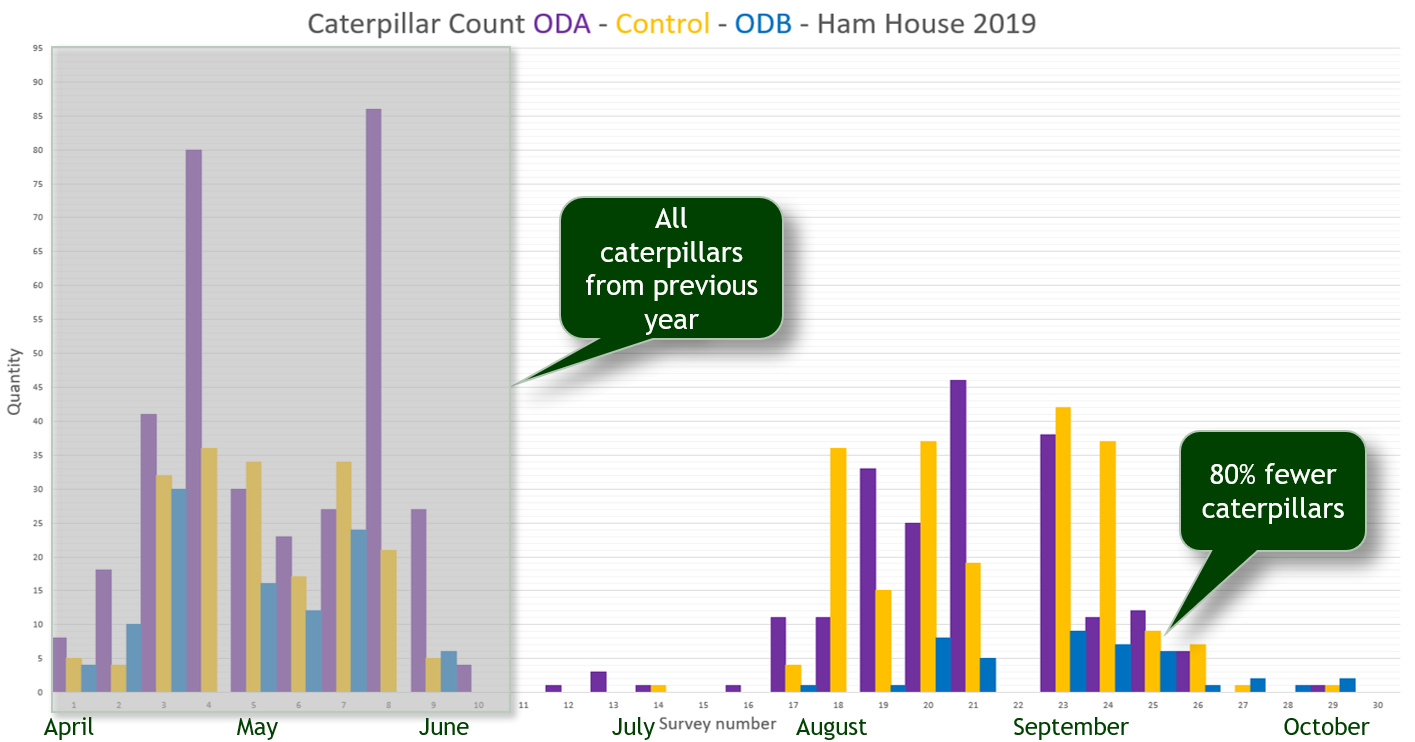 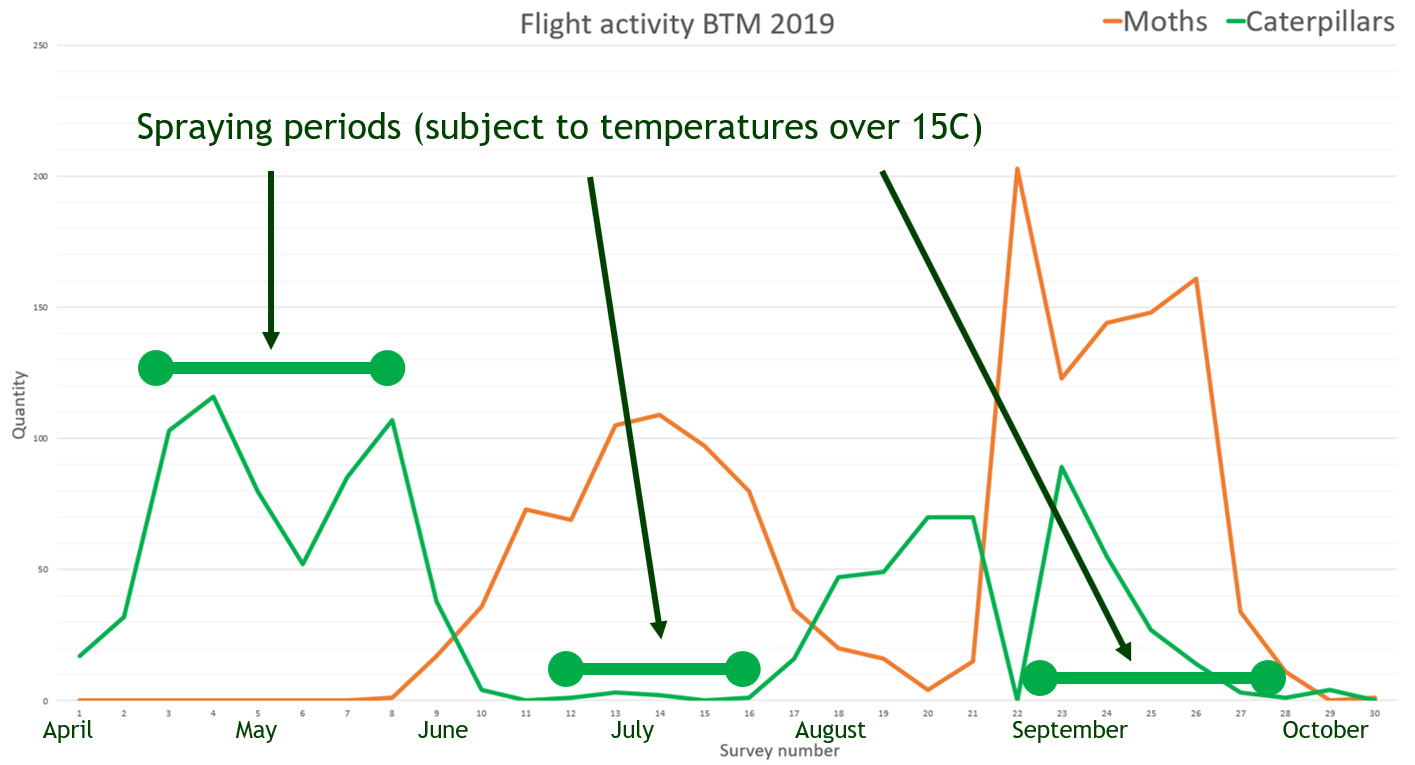 Number of Caterpillar caught per week in the three zone are shown with Purple for ODA, Yellow for the control area and Blue for ODB.

Ignore the first batch of caterpillars on the left from April to the end of June as these were the ones that over wintered 2018/19 and shows how many were missed using manual extraction.

Looking at ODA (Purple) the results weren’t great and this was tracked down to being a problem with release rate of synthetic frass volatiles, real world temp variations caused a much quicker release.  This gave the impression to female moths that caterpillars had finished eating and that caused them to lay their eggs, not what was wanted!

However, more positive and interesting were the figures for ODB (BLUE).  In the second half of the year there was an 80% reduction in caterpillar numbers compared to the control zone.  This is a good reduction and would help reduce damage to the hedges.

The second graph combines both the number of caterpillars and the moth count from the pheromone traps, and shows very clearly when action should be taken to spray with a Bt based spray such as Dipel, Bruco, XenTari, etc.

Due to access being limited to Ham House at present, this years trials are taking place using the Chairman’s own box hedges in his garden in Chiswick, West London.

The control zone will be a box hedge in the front garden, which is about the same general proportions, but isn’t as long, so caterpillar counts will be adjusted appropriately.

Pheromone traps will be used to show the pest pressure levels – front and back garden box moth numbers have been similar in previous years.  If you are interested in seeing the moth numbers for these traps, they will added to the Box Moth & Caterpiller Tracker each week, just search for the post code W4 1BZ.

Weekly checks on the hedges will be carried out from now until November to see how well the deterrent works in it’s delivery method and packaging.

EBTS will keep you updated throughout the trial period.