The edge before box By David Jacques 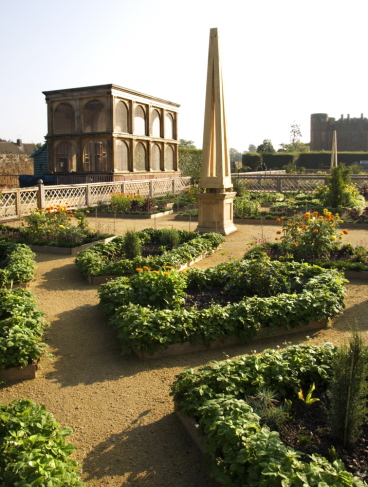 The restoration of the Earl of Leicester’s garden at Kenilworth Castle gave the team assembled by English Heritage an opportunity to examine our knowledge of what an Elizabethan garden consisted of, and how it actually looked.

There have been several Tudor re-creations, perhaps the best being that at Shakespeare’s house in Stratford-on-Avon, masterminded by Ernest Law in the 1920s. He recreated the railings and arbours seen in The Gardener’s Labyrinth of 1577 by Dydymus Mountaine (a pseudonym for Thomas Hyll), and borrowed its designs for interlaced knots, whereby strands of herbs created intricate patterns by passing over and under other strands, with the interstices filled with flowers of many colours. [Ernest Law, Shakespeare’s Garden, Stratford-upon-Avon, Oxford: Blackwell, 1922, plate facing p.24.]

In fact, though, the traditional form of knot at the time of this book was the raised bed. As in agriculture, the plot was turned over and dunged in the autumn. It was then set out afresh every spring. As Thomas Tusser wrote in ‘Marches husbandrie’: [Thomas Tusser, 500 Points of Good Husbandry, 1573, 44.]

“Through cunning with dibble, rake, mattock, and spade,
By line, and by level, trim garden is made.”

The paths would be beaten down and sanded, and wooden boards would keep the soil of the beds in place. Hyll described this in an earlier book: [Thomas Hyll, A most briefe and pleasaunt treatyse, teachynge howe to dress, sowe, and set a Garden, London: Thomas Marshe, 1563, f. B.viii.]

“… and let the borders or edges of the beds be raysed two fote high in moyst or watery places but in drye places, it shalbe sufficient to raise them one fote hygh.”

Hyll’s gardening manuals continued to be published, with additions to the several editions, but was derivative and compared poorly to an excellent French one, La Maison Rustique. English noblemen frequently used Frenchmen to make their gardens, and many innovations came from France in this way. Raised beds began to give way to lower ones, and this permitted the use of herbs, instead of boards, as edging. The architects of Kenilworth appear to have taken Sebastiano Serlio’s book on architecture as a guide as far as architectural features were concerned, and may thus have designed knots as shown in that book, much as Hans Vredeman de Vries was doing in The Netherlands.  [Hans Vredeman de Vries, Hortorum Viridariorumque Elegantes et Multiplicis Formæ, Antwerp: 1583.]  Such knots appear to have been at ground level and permanent, or at least changed infrequently.

The 1586 edition of La Maison Rustique suggested that herbs suitable for edging were sweet-smelling ones that did not grow large, including hyssop, thyme, pennyroyal, sage, and marjoram.[Charles Estienne & Jean Liébault, L’Agriculture et Maison rustique, Paris & Lyon: 1586, f. 143.]  Hyll also knew of hyssop and thyme, and suggested that low mazes could be made in these herbs.[Dydymus Mountaine, The gardener’s labyrinth, London: Henry Bynnerman, 1577, 81.]  The advice was good, and was eventually adopted. In the meantime, though, the favoured edging in England was thrift (Armeria maritima), a perennial found in salt marshes that produces fragrant pink flowers between April and October.

Matthias de l’Obel, the French physician and botanist whose Stirpium adversaria nova (1570) was a milestone in modern botany, appears to have considered thrift a kind of gillyflower (in fact it is not related to the Dianthus genus). Gerard gave it the alternative name ‘Sea Gillofloure’. Even today an alternative name for thrift is ‘sea pink’.

Perhaps thrift’s popularity derived from its identification as a gillyflower. John Gerard, right at the end of the sixteenth century, wrote that thrift was found ‘in Gardens, for the bordering up of beds and bankes, for the which it serveth very fitly’.[John Gerarde, The Herball, ed. Thomas Johnson, London: Adam Islip, 1633, 603.]  Gervase Markham remarked that: ‘divers doe use in knots to set Thrift, and in time of need it may serve, but it is not so good as any of the other, because it is much subject to be slaine with frost, and will also spread upon the earth in such sort that, without very painefull cutting, it will put your knot out of fashion’. [Gervase Markham, The English Husbandman, London: John Browne, 1613, 124.]  John Parkinson also confirmed that in his day the old-fashioned plant for bordering had once been thrift: ‘to begin with that which hath beene most anciently received, which is Thrift’. [John Parkinson, Paradisus Terrestris, London: Humphrey Lownes, 1629, 5.]  Thrift was thus a prime contender for the knots at Kenilworth, originally made in the 1570s. 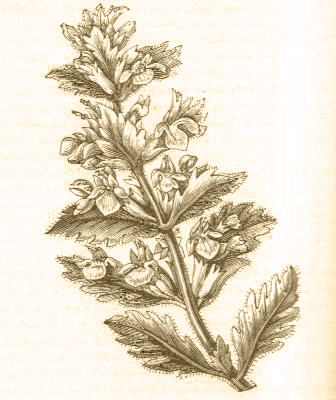 Markham, early in the next century, promoted germander: [Markham, 124.]

“Now, as soone as you have drawne forth and figured your knot upon the face of your quarter, you shall then set it either with Germander, Issoppe, time, or Pinke-gilly-flowers, but of all hearbes Germander is the most principall best for this purpose.”

Parkinson, in the late 1620s, mentioned that germander was ‘in former times much used’, but suffered from growing ‘out of forme’ and spreading out by root. He also gave an insight into the nursery trade’s propagation of edging material: [Parkinson, 5 & 467.]

“Tyme, Savory, and Hyssope, are usually sowne in the Spring on beds by themselves, every one a part; but they that make gaine by selling to others the young rootes, to set the knots or borders of Gardens, doe for the most part sowe them in July and August, that so being sprung up before Winter, they will be the fitter to be taken up in the Spring following, to serve any mans use that would have them.”

He noted that the fashionable had moved on to lavender cotton (Santolina chamaecyparissus) in his day, despite its comparatively short usefulness: [Parkinson, 6.]

“Lavander Cotton being finely slipped and set, is of many, and those of the highest respect of late daies, accepted, both for the beauty and forme of the herbe, being of a whitish greene mealy colour, for his sent smelling somewhat strong, and being everliving and abiding greene all the Winter, will, by cutting, be kept in as even proportion as any other herbe may be… The rarity & novelty of this herbe, being for the most part but in the Gardens of great persons, doth cause it to be of the greater regard, it must therefore be renewed wholly every second or third year at the most, because of the great growing thereof.”

The other structural planting in the knot was on the ‘bordure’, or inner fence. Woody or climbing plants began to run over the rails, which eventually were replaced by hedges. La Maison Rustique pointed to lavender and rosemary as suitable for growing amongst the fencing, pointing out that box was disliked because of its smell. [Liébault, f.143.]   Markham, though, actually preferred box, or else privet: [Markham, 120.]

“about the verdge or square of the quarter was set a border of Primpe, Boxe, Lavandar, Rose-mary, or such like, but Primpe or Boxe is the best, and it was set thicke, at least eighteen inches broad at the bottome & being kept with cliping both smooth and level on the toppe and on each side, those borders as they were ornaments so were thay also very profitable to the huswife for the drying of linen cloaths, yarne, and such like: for the nature of Boxe and Primpe being to grow like a hedge, strong and thicke, together, the Gardiner, with his sheares, may keepe it as broad & plaine as himself liketh.”

Dwarf Dutch box had been in use in French parterres since the 1580s, but the first Englishman to recommend it for edging of beds on the grounds of permanence and orderliness was Parkinson: [Parkinson, 606.]

“The lowe or dwarfe Boxe is of excellent use to border up a knot, or the long beds in a Garden, being a marvailous fine ornament thereunto, in regard it both growth lowe, is ever greene, and by cutting may bee kept in what maner every one please, as I have before spoken more largely.”

With the advent of plain parterres (i.e. just grass and gravel, with perhaps a few juniper or cypress trees) in England about this time, box had to wait till the 1680s before being more widely adopted as edging to plates bandes in the principal parterre. In the meantime the herbs mentioned above seem to have served in the specialised flower gardens and beds in kitchen gardens.