In July 1977, The Garden, the Journal of the R.H.S., featured an article by Anne Scott-James, A bibliophile’s garden. It describes the garden made by my mother, Rosemary Verey, at Barnsley House as ‘a deeply literary garden’ and goes on to quote many of the books by authors from the second half of the 16th century to the present day that Rosemary had collected during the course of the previous decade.

Perhaps it was a literary conceit of her own that led Anne to give a precise date as the moment of birth of Rosemary’s beautiful garden, to coincide with the moment in May 1967 when she received an offprint of an academic monograph on the subject of the Mandrake.  It had been left to her in the Will of an acquaintance of my father, David Verey.   It is however well documented that Rosemary and my father started a substantial transformation of their inherited garden six or seven years earlier.

The monograph was well illustrated with woodcuts from 15th and 16th century herbals and it traced the facts and the myths that surround its strange cucurbitaceous subject (Mandragora) from the time of Theophrastus, three hundred and fifty years before Christ: moreover, it brought facts and myths together within the remit of contemporary academic discipline. 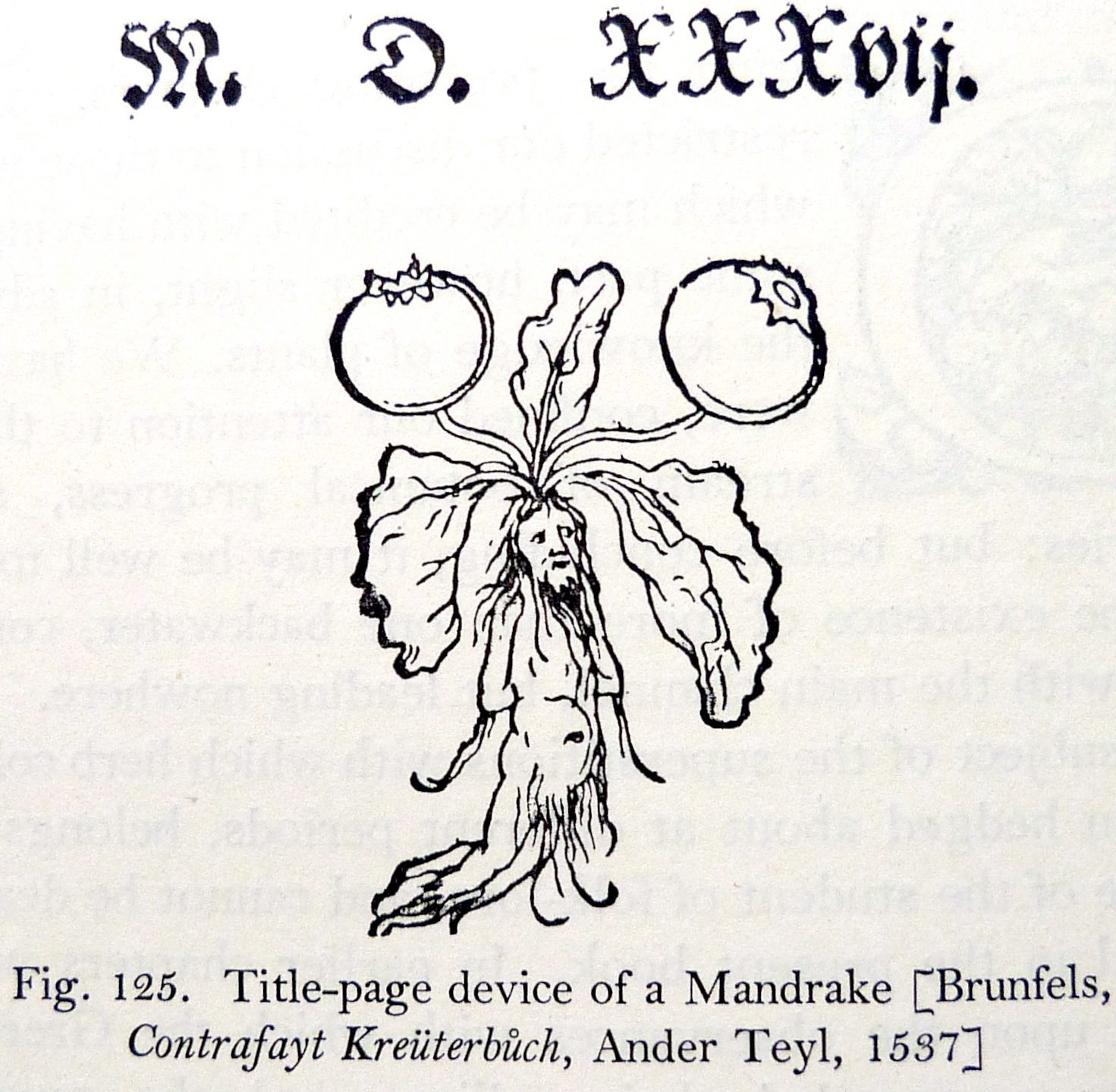 Anne Scott-James claims that it was the shock of realising her ignorance of gardening history that led Rosemary to collect books. It must have played its part, but it doesn’t explain why other books that she already knew, Miles Hadfield’s 1960 edition of Gardening in Britain, for instance, or her even earlier awareness of Eleanor Sinclair Rohde, had not provoked a similar response.  I suspect that it was a matter of timing.  In the earlier years of the 1960s Rosemary had given all her energy to the process of becoming a skilled gardener.  Now, The Insane Root prompted her to see the extent to which her pursuit of gardening knowledge was in direct line with the experience of generations of historical figures.  It found her receptive to the possibility of making contact with book dealers to bring the tradition of gardening into her own home through its literature.

Scott-James elicited from Rosemary the interesting detail that her first purchase was a lot at Sotheby’s including Charles Singer’s The Herbal in Antiquity (another learned monograph) and a volume on the Woad plant and its dye.  And she took her literary conceit a step further by comparing Rosemary’s moment of realisation when faced with the Insane Root to the moment in April 1930 when Vita Sackville-West fell in love with the Elizabethan tower at Sissinghurst.

The very idea of a ‘literary garden’ is unusual enough to lead us to ask further questions about the context in which it was proposed. It is a general rule that creative observations don’t arise in an isolated way but that they are symptoms of a wider movement or of the changes of the time.  Scott-James’s conversations with Rosemary in 1977 were equally a part of the research that she was doing for The Pleasure Garden (John Murray), to be published later in the year, for which she contributed a series of essays to accompany cartoons celebrating the diverse styles of English gardening on which her husband, Osbert Lancaster, was currently working.

In 1977 too, John Harris, Curator of the British Architectural Drawings collection and Roy Strong, Director of the Victoria Albert Museum, were planning a major gardening exhibition that would be held at the museum in the summer of 1979: The Garden: A Celebration of One Thousand Years of British Gardening.  The insight that led to a gardening exhibition in a museum dedicated to the decorative arts and to design may have been unexpected: and it provoked criticism in the architectural press.  But a focus on the historical legacy of British Gardening would prove to be widely welcomed.  Moreover, it was a logical successor to the V & A’s successful 1974 exhibition, The Destruction of the Country House.

It is to the credit of the much younger Strong and Harris, born after 1930, that they saw the need to reconnect a post-WW2 society returning to appreciable levels of prosperity with the knowledge-base of a generation of garden and plant specialists born in the first two decades of the century, whose careers had been disrupted by the years of war and by its social and economic effects.

Harris duly took on the task of editing a book to accompany the exhibition.  Broad in its scope, Rosemary (born 1918) was invited at the outset to contribute an article on English Gardening Books. The published article was written and illustrated uniquely from her personal collection, with the single exception of the earliest 16th century herbals.  Not all who participated in the exhibition were gardeners, but they brought specialist knowledge of peripheral subjects, of taxonomy, flower arrangement, history and illustration.  All came to it from the generosity of tradition.

If the movement that led to the 1979 V & A exhibition is symbolised by a single contemporary garden, that garden is Rosemary’s garden at Barnsley House.  Anne Scott-James was not the only mover to recognise both garden and gardener.  John Harris and his wife and James and Alvilde Lees-Milne were frequent visitors: so was Peter Coats.  Fred Whitsey and Russell Page had both recognised Rosemary’s combination of flare for gardening with a debt to the vision of history.  For a number of years she had been a committee member of the Garden History Society under Miles Hadfield’s chairmanship.  And this was the moment that Barnsley House garden achieved its epitome. 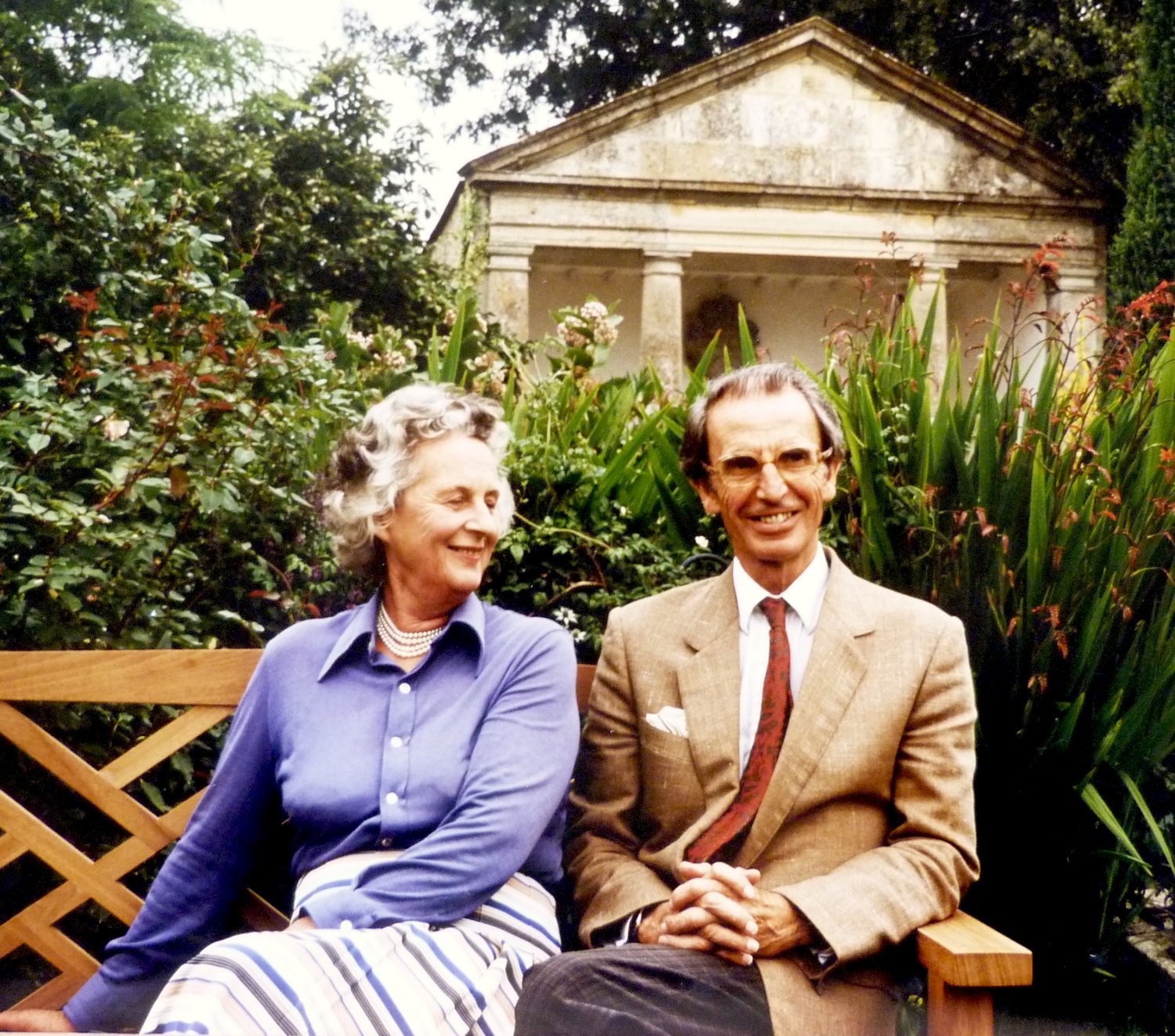 It is of interest to note that Rosemary and David Verey first visited America, with anticipation and excitement, in October 1978.  They had VIP received treatment on the QEII: Rosemary’s brother, Francis Sandilands was on the Board of Trafalgar House, the conglomerate that had ‘saved’ Cunard.  Though she had written many articles for The Countryman, a small journal distributed from Burford, the invitation to contribute regularly to Country Life only came in 1979.  She was now 60 and had still not published a book.  But it was at this point that she set herself the task of passing on the gardening knowledge that she had learnt.

This article was originally published in Topiarius Vol 17 Summer 2013 on page 48.