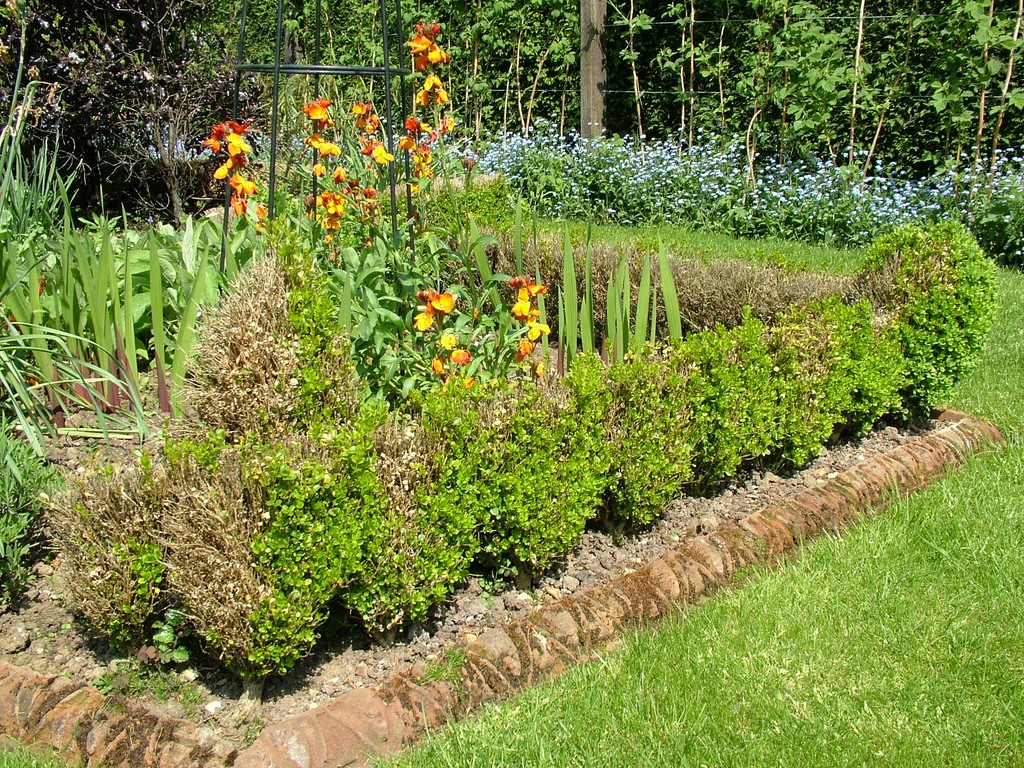 In the mid-1990s, the fungus Cylindrocladium buxicola was introduced into the UK. It has had a devastating impact on box (Buxus spp), a British native and one of the oldest ornamentals. The fungus causes leaf spots, defoliation and die-back of box. A diagnostic feature of the disease is the presence of black streaks on the stems.  The disease is extremely disfiguring and as a result of repetitive defoliation the plants may die especially if they are young.  Cylindrocladium blight is different from another box blight disease caused by Volutella buxi. Unlike C. buxicola which can penetrate directly through the cuticule, V. buxi needs wounds to infect and stressed plants are likely to be more susceptible to the disease. This latter fungus also causes dieback and it is often seen with C. buxicola. In wet conditions, the spores of the fungus are white for C. buxicola and pink for V. buxi and may be seen on the under surfaces of infected leaves.

C. buxicola became established quickly in the UK and has now spread to most of continental Europe from North (Sweden) to South (Spain and Portugal) and from West (Ireland) to East (Turkey and Georgia).  It also occurs in New Zealand. No one knows where the disease comes from and the claims that the fungus originated from Central America have not been substantiated. The fungus is likely to cause little damage where it originates from, a characteristic of most introduced pathogens. The disease is threatening natural habitats and affects box on Box Hill (near Dorking) where 40% of native box occurs. In Georgia, large areas of ancient forests of Buxus colchica have been affected by the disease.  [Note:- Buxus colchica is a relict species of box native to Azerbaijan, Georgia, Russia, and Turkey. It does not differ morphologically from B. sempervirens and is considered to be synonym of it.]  In October 2011, the disease spread to the USA and Canada. In the USA, the disease has spread rapidly on infected material and is already recognised in many different States on the Eastern and Western Coast.

There are some effective treatments available to nursery growers but the fungicides tested so far which can be used in gardens have a limited success.  A second population of C. buxicola has emerged recently which has a reduced sensitivity to some fungicides but no difference in infectivity with the main population has been detected. This finding will have important implications on management practices using fungicides. Therefore, the disease will continue to be difficult to control in gardens but several control strategies can be put in place to limit the spread in gardens and the wider environment.

Box blight is a very damaging disease that can spread very rapidly in optimum conditions. Prompt and aggressive control measures are therefore necessary to contain the infection.

The most important precaution gardeners can take is to ensure that the box plants they buy are not infected. Hold any newly bought plants in isolation for at least three weeks to confirm they are free of infection before planting out. Commercial nurseries may use fungicides which suppress but do not kill the fungus and this isolation technique will allow time for any suppressed disease to become visible.

Reducing or stopping clipping to make the plant less dense and therefore allowing more ventilation throughout the plant also helps to reduce the incidence of the disease.

Inspect your plants regularly and if the disease does break out, remove and destroy affected plants. If they are mature and highly valued, cut out all affected parts, clean up fallen leaves (including stripping and replacing surface topsoil to ensure complete removal) and treat with a fungicide. Fungicides available to amateurs for use on ornamentals such as difenoconazole, myclobutanil, tebuconazole and triticonazole are likely to have a limited activity so they should not be used when the symptoms are severe. Difenoconazole has shown to have some protectant activity in trials carried out in Germany. 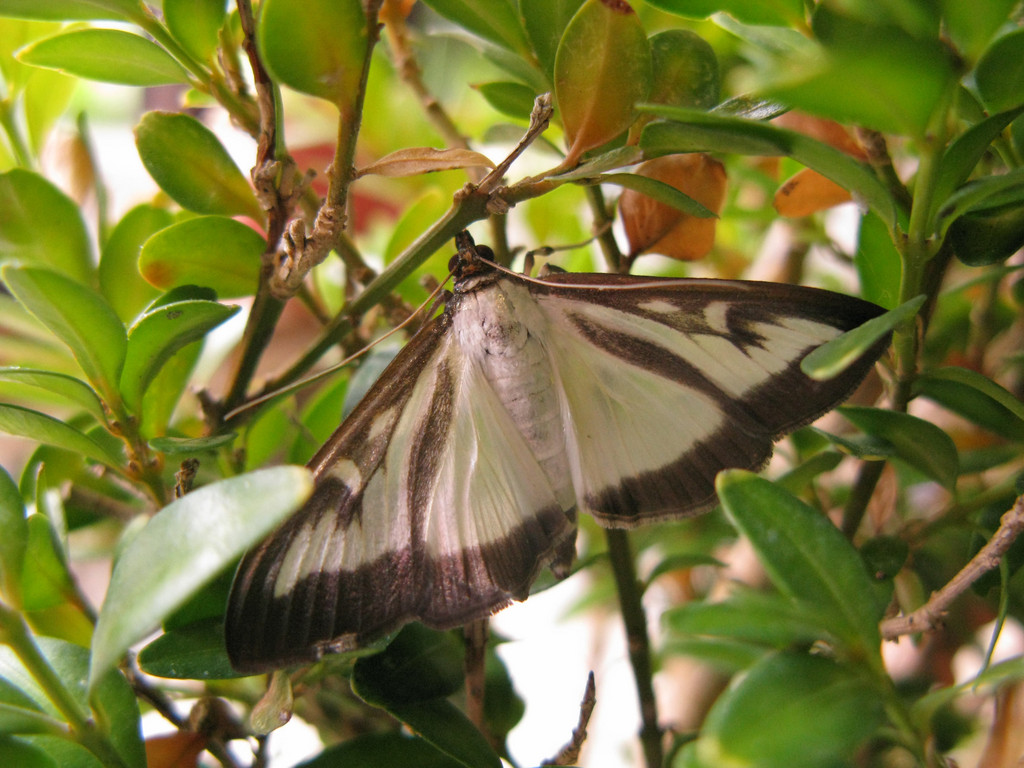 The box tree caterpillar (Cydalima perspectalis) is native to East Asia (China, Japan, Korea). It became established in mainland Europe in 2007. This caterpillar feeds within webbing and can completely defoliate box plants. It has caused substantial damage to native box trees and ornamental box plants in Germany and Switzerland.  Adult moths have been found in the UK since 2008 and in 2008 and 2009 larvae were reported from a single commercial nursery.

In 2011, larvae were reported in four private gardens, indicating that the moth was becoming established in the UK. Only two reports (one adult and one of larva) were received in 2012 but this may be due to the wet and cold summer. The biology of C. perspectalis in Europe has not been studied in detail. There are probably two or three generations between May and September but this may depend on the temperature.  The adult moth can spread 5-10 km a year. Its host range is not fully understood. In Europe, the larvae have only been observed on species of box including Buxusmicrophylla, B. sinica var. insularis and B. sempervirens. In Asia, the pest has been reported on other hosts including Ilex purpurea (purple-leaved holly), Euonymus japonicus (Japanese spindle), and Euonymus alata (burning bush). The pest needs further research and gardeners are encouraged to report sightings to the RHS by sending samples or photographs to Entomology, RHS Garden Wisley, Woking, Surrey GU23 6QB or sending images to advisory_entomology@rhs.org.uk. 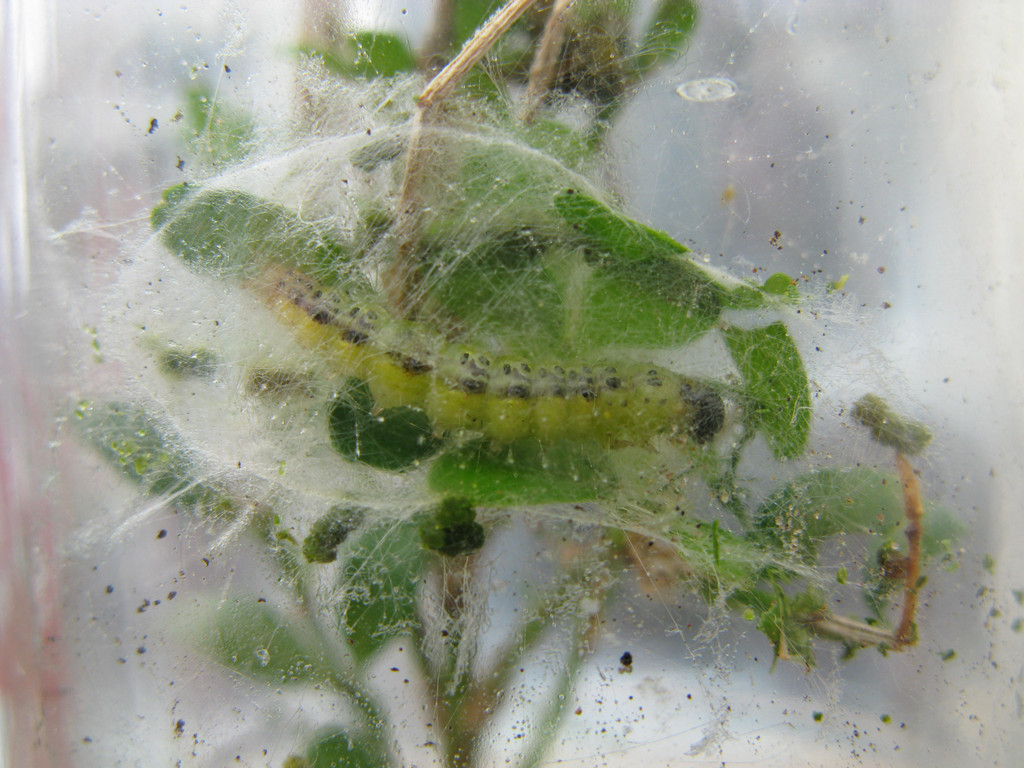 Further information from the RHS

This article was originally printed in 2013 Topiarius Volume 17 page 31.