Gardens in the Dordogne – Words & Pictures by Roger Last

The Dordogne has long been a favourite destination for the English  –  hardly surprising given the beauty of the countryside. It is a land of winding rivers, of castles precipitously perched on outcrops of rock with villages huddled below, woods of oak and chestnut on the hills and, in the valleys, rich planting of walnuts. Add to this a sequence of outstanding gardens and the experience achieves a new dimension.

Three gardens here in particular should be on any serious garden visitor’s list. True, none of them can rival the greatest gardens of France. All three are relatively small but they are rewarding and indeed exemplary in their differing ways.

The Château de Hautefort dominates the Auvézère Valley and village of Hautefort below. A medieval fortress, it was transformed in the 17th century by Le Marquis Jacques-François de Hautefort. From 1853, the landscape architect, Comte de Choulot, added a landscaped park and laid out the gardens. These in turn were restored by the Baron and Baronnesse de Bastard between 1929 and 1968.  They completed a comprehensive restoration of  both château and gardens, only for the château to be burnt down. The Baronnesse, undeterred, rebuilt.

Choulot’s gardens had been lawns and flowers. The Baron and Baronnesse introduced box and formality, the perfect compliment to the château with its steep roofs and round towers with their domes and lanterns, blended in a restrained classicism that is unmistakably French.

The approach from the west is via two linear gardens of precision cut box, one wall within another, austere, but with a judgement that is exactly right. Living garden architecture is a prelude to the château itself, whose inner gardens unfold in a circuit round the perimeter. 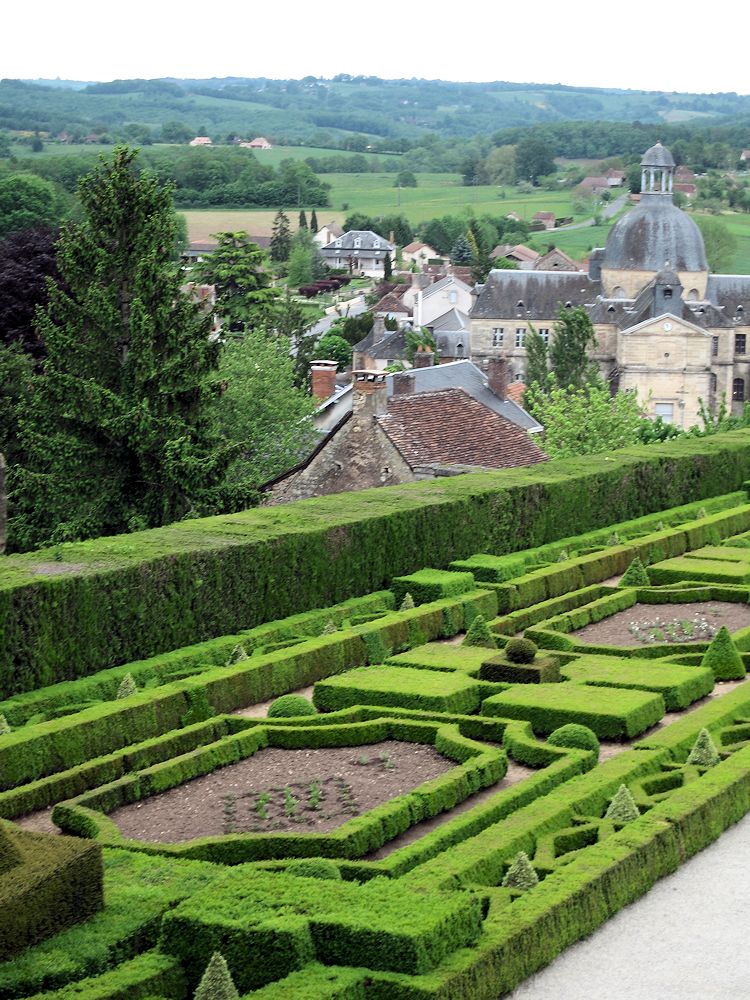 To the north, sentinals of  topiarised yew and columns cut with spirals lead along a rampart walk down to one of the two great set pieces here – a huge semi circular parterre of box. This is a tour de force of inventive and rhythmical box topiary, divided into four main sections.

Much of the infill between the box is planted. Dahlias might suggest like an unwise choice but here they add a lightness of touch, even of frivolity. The box is sufficiently high to balance the effect. Add in flamboyant scrolls, domed yews giving height and an imaginative jigsaw of interweaving patterns, and the design is successfully drawn together.

A serious unadulterated French parterre lies to the south. A complex design in perfect balance, set in gravel with box and in-filled with sand, it stretches along the greater part of the lower western rampart. It is viewed to perfection from the upper rampart, as is the countryside. 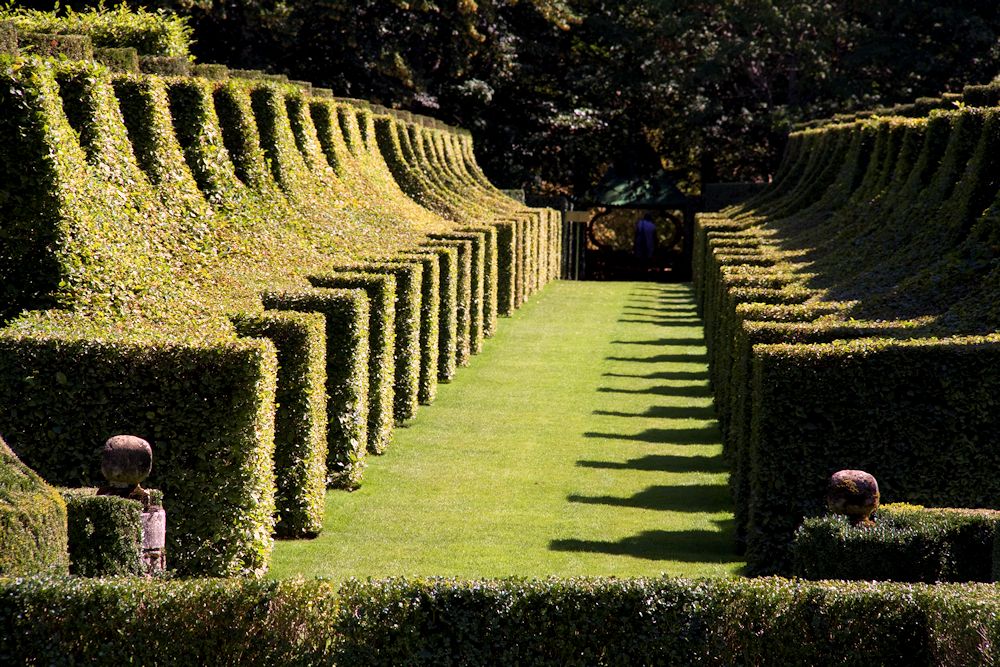 Les Jardins du Manoir d’Eyrignac, created from 1966 by Gilles Sermadirasu and continued by his son Patrick, have achieved considerable celebrity. It is not difficult to see why. Their scale compliments the size of the manor house.  They are not too large to be off-putting, yet they are large enough to be able to wander, explore and discover. These are formal gardens celebrating yew, box and hornbeam –  the three staples of the topiary world. Here they are used to perfection with a treatment which is imaginative, beautifully judged and presented with precision and a fine attention to detail.

Hedges divide the gardens into a variety of apartments, the most complex of which is the Hornbeam Walk. Sited between two orchards, where the apple trees are cut into globes, the design exploits the possibilities of repetition and rhythm with the use of the curve, the cube and the cylinder.

Curved hornbeam buttresses terminate in cubes which enclose cylinders of yew. The interplay of light and shade, of form and structure presents endless variety. It does not depend on the light alone but the season too, as the hornbeam turns to gold then russet before presenting its darker winter framework.

In front of the manor house is the French garden – a box parterre where the box is presented in solid patterns and not set in gravel but in grass. Grass is one of the main features of Eyrignac. It is everywhere, lush, beautifully cut and unexpected. Five hundred irrigation devices water and spray the grass through the hot summers and a year-round programme of expert maintenance ensures an impeccable result.

Each vista in the garden is perfectly imagined and composed. Memorable is the ornamental rectangular fish pond enclosed by thick yew hedges cut with archways  and the Hornbeam Rotunda, set as a bastion on a steep sloping bank. Windows in this allow views out over the countryside. 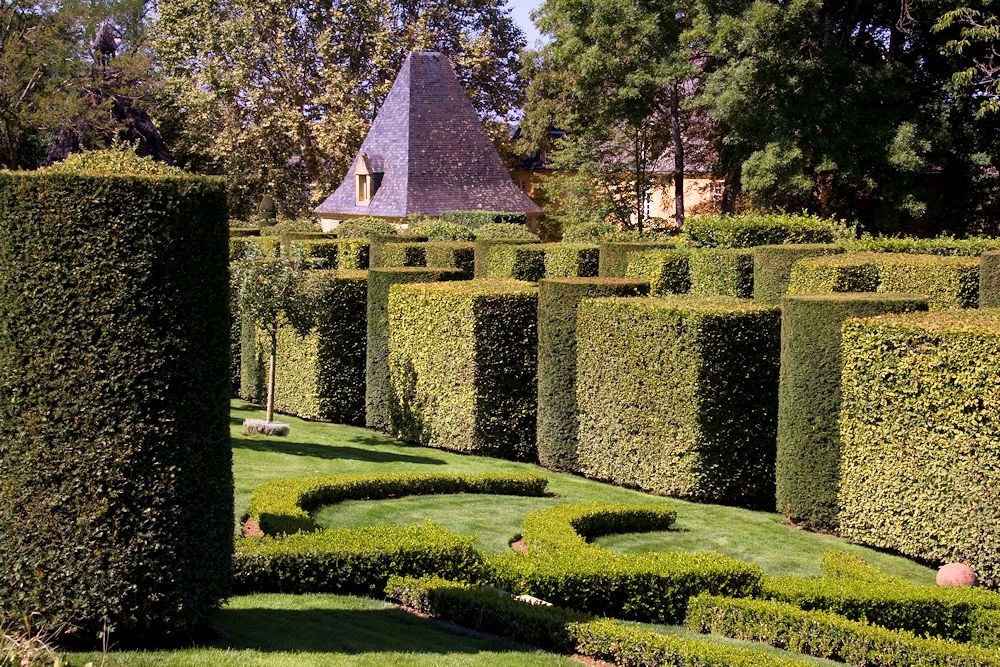 Beyond the main enclosures is a more recent development, a White Garden. The design is still formal and geometric but here, contained within enclosures of box, are white roses and mounds of petunias with, in the spring, white tulips. Movement is added by the play of five vigorous fountains. Adjoining is a wild flower meadow, richly planted to achieve a jewel like effect.

Are the gardens at Eyrignac perhaps too perfect, their rigour, achieved by six full time gardeners, too extreme? Should wit and humour be allowed to lighten the approach?  These are subjective matters, best left to the owners who have created this very beautiful place. 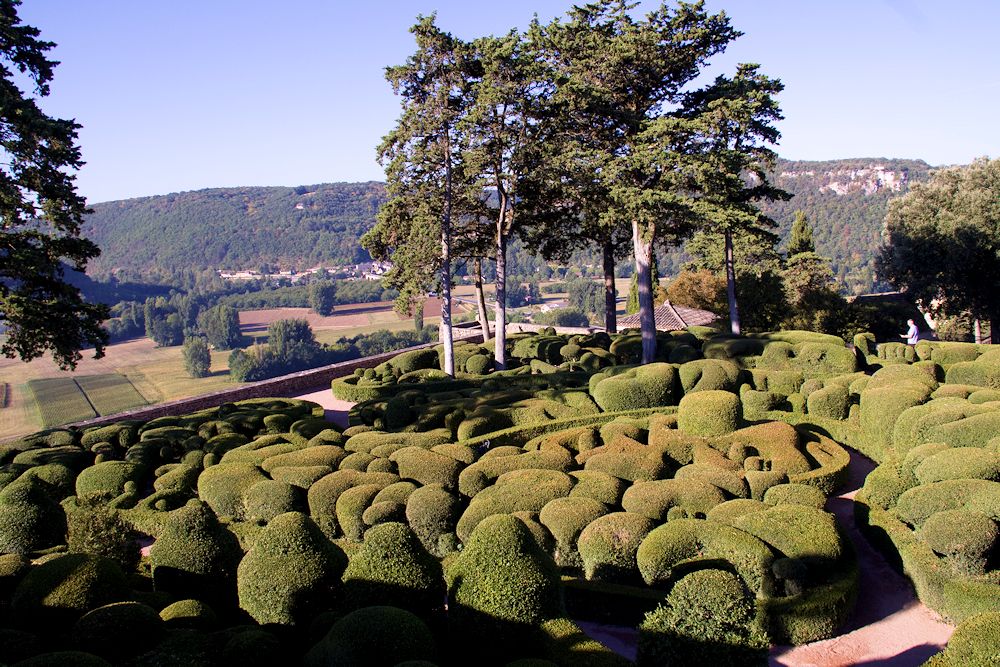 Les Jardins Suspendus de Marqueyssac are set on a remarkable natural site, a rocky and extensive spur set high above the river Dordogne. They cover 22 ha and were  laid out in the second half of the 19th century by Julien de Cerval.

It has been estimated that there are some 150,000 box plants here, some now grown to ten metres. Box is everywhere, sheltered by the dense growth of holm oak which successfully exploits the terrain.  Since 1997 the gardens have been restored by Kléber Rossillon.

The main feature is the first to be encountered, an extensive labyrinth of tightly clipped box set on the sloping ground of a large bastion. What makes it remarkable is the densely packed rounded and irregular shapes of varying heights, in appearance much like smooth sea-worn boulders. A sequence of meandering paths through the box and higher ground above presents a kaleidoscope of perspectives.

A main promenade leads off to the woodland and box stretched out over the promontory. An extensive network of paths at different levels with connections between them soon ensures privacy and exclusivity, even on a busy day, as a series of green labyrinths, rock paths, cascades, seats and buildings are revealed.  Eventually the walk and climb leads to the Belvedere, with a walkway jutting out from the rock, 130 m above the river. The view is superb with the romance of the early morning mist just clearing from the bend in the river far below.

Among other outstanding gardens seen on this tour was  the private gardens of Mme Chantal Baudron at Château de Veyrignac.

Since her arrival in 1994, the gardens  and have undergone an extensive transformation. Behind the urn runs a terrace below which is a steep drop down to the river Dordogne winding through a wooded valley. Even the sides of the slope are planted with box in radiating patterns. Leading from the parterre is a contemporary cascade, part of the Italian garden, and elsewhere is a herb garden, a Mediterranean pool complete with lotus plants, an extensive rose garden, hydrangeas and an exceptionally long English style herbaceous border besides much sculpture and pools, fountains and water.

We also visited Chateau de Losse, overlooking the river Vézère. Here the gardens are not extensive but perfectly matched to the scale and charm of the château. Its owner, Mme Jacqueline van der Schueren, who some of the group had met on the EBTS Scottish visit in 2005, gave us a delightful and informative conducted tour of both the gardens and the château. In all eleven gardens were visited in a full and highly rewarding visit.